Football
News
Despite the constant links, Rice and Chelsea are far from a match made in heaven.
Joey Mills
08:00, 04 Dec 2021

There are very few sure things in football, but one you can count on is Declan Rice getting linked with a move to Chelsea. The England midfielder started out in the Stamford Bridge youth ranks before moving to the club they play this weekend, West Ham United. The way Rice has developed, and his authoritative performances for club and country, have seen whispers of a Chelsea return get ever louder.

West London is not Rice’s only rumoured destination. The Manchester United links are unsurprising, especially considering the last top class holding midfielder they had is now their caretaker manager. But Chelsea are still considered his likeliest destination when he eventually leaves the London Stadium. Putting aside the intoxicating narrative of the prodigal son’s return though, do they need him?

Rice is a player of undoubted quality and, with all due respect to West Ham, it does feel inevitable he will end up at a club with title ambitions in the near future. But putting aside his boyhood affiliations, Chelsea might actually be the club who need him the least amongst the top sides in England. As mentioned, United feels an obvious fit. Liverpool have looked a little bare in central midfield at times this season, and Rice would certainly be an upgrade in that department. Manchester City aren’t crying out for a defensive midfielder, but at the same time Fernandinho surely can’t go on forever. It is easy to envision Rice turning out for any of these sides.

In contrast, Chelsea have the two highest ranked central midfielders in this year’s Ballon d’Or vote. Jorginho came 3rd, while N’Golo Kante ranked 5th. While he usually operates slightly further forward, Mason Mount also came 19th in the same ranking. Beyond these gilded individuals, Chelsea also have a resurgent Ruben Loftus-Cheek, Mateo Kovacic and loanee Saul Niguez. Admittedly, the latter is underperforming and not yet a permanent addition, but this depth in the middle of the park leaves little room for a new signing. 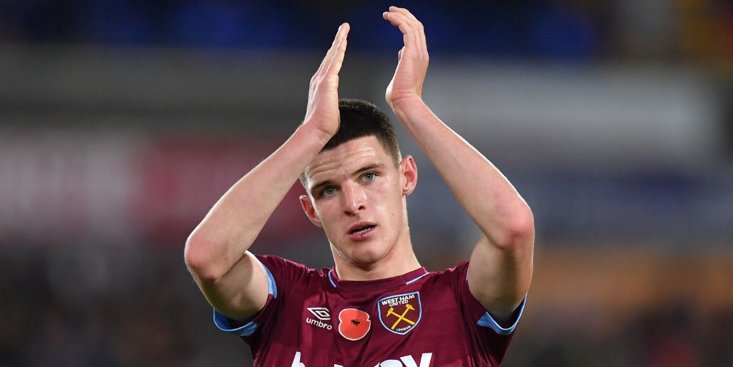 There is an area where Chelsea could use reinforcements, and it’s an area Rice has experience in. Chelsea’s defensive situation could become a problem next season, for a variety of reasons. Both Andreas Christensen and Antonio Rudiger are yet to sign contract extensions, and as things stand they will be free to discuss terms with clubs abroad in the summer and leave for nothing. Thiago Silva’s deal will also expire at the end of the season. While the veteran is remarkable for his age, the fact he is 37 means Chelsea can’t rely on him for much longer.

Declan Rice first broke through as a centre back for the Hammers, and there has been talk that Chelsea would look to bring him in as a defensive option. When asked by BBC Sport in 2019, Rice said that his preferred role is in central midfield. Whether the pull of the European champions would be enough to inspire a re-think remains to be seen. Rice has not played as a centre back on a consistent basis since the 2018/18 season, so such a move would be rather puzzling from both parties were it to come off.

Declan Rice returning to Chelsea makes for a good story for the same reason Romelu Lukaku joining in the summer did. They are both players who excelled elsewhere after not getting many (or in Rice’s case, any) games at the Bridge. Along with Mohamed Salah and Kevin de Bruyne, it is seductive to wonder what could have been if these players had remained at Chelsea. But as Lukaku has found out during a difficult few months back in London, sometimes the wondering is preferable to the reality.

Lukaku at least arrived at a team crying out for a striker. Rice would be coming into a team stacked with central midfield talent. While he seems certain to play for a team chasing the biggest honours one day, it is doubtful whether Chelsea is the right fit for Declan Rice.

West Ham are 18/5 to beat Chelsea with Betfred*