Football
News
Chelsea and Man City put one foot in the UCL quarter-finals with wins over Atletico and Fiorentina, respectively, on Wednesday night
Simon Lillicrap
21:20, 03 Mar 2021

Chelsea Women came through a dramatic Champions League first leg against Atletico Madrid, winning 2-0 despite being reduced to ten players after just twelve minutes, in a game that was packed full of drama, with three penalties and one red card.

Sophie Ingle was sent off early on for bringing down Rasheedat Ajibade in the box and a spot kick was awarded, giving the Spanish side a great chance to take the lead and assert their dominance in the tie. Luckily for Emma Hayes’ team goalkeeper Ann-Katrin Berger had done her research and was on hand to get down low and deny Deyna Castellanos’ effort to keep the scores level, but that wasn’t the end of the drama.

The Blues held firm until half-time and then in the second period, were awarded a penalty of their own after Sam Kerr was brought down in the area. Maren Mjelde made no mistake, showing Castellanos how to finish from twelve yards as she blasted the ball into the net to put her side 1-0 up.

Fran Kirby hit the post from close range but was not to be denied just a minute later as the English international doubled the lead after finishing from Kerr’s pass. Atleti’s defenders were left standing as Kirby finished to give Chelsea the upper hand, but they were not going down without a fight.

Amazingly, the side from the Spanish capital were then awarded another penalty as the Chelsea goalkeeper felled an Atletico Madrid forward but once again Berger showed her class, saving her second spot-kick of the game, this time from Merel van Dongen. In the key moments, the Chelsea players stood tall, while their visitors crumbled. After playing 80 minutes with just ten players, Hayes’ side had pulled off an absolutely epic victory, one that could see them into the quarter-finals. 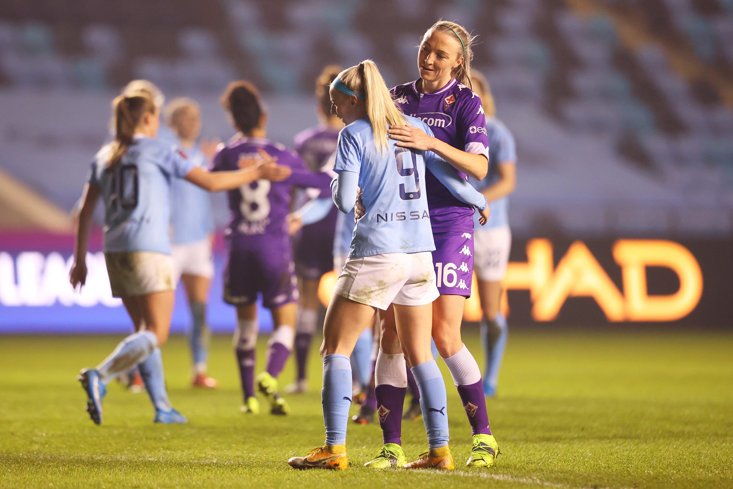 Meanwhile in the early kick-off, fellow English side Manchester City blitzed Fiorentina, scoring twice in the first four minutes to put one foot into the Champions League quarter-finals with a 3-0 win. The Citizens came out of the traps flying on a sunny Manchester evening as Lauren Hemp headed home after two minutes, following a fantastic run by Chloe Kelly down the right wing.

The Italian side looked as if they hadn’t awoken from their afternoon riposo as they were soon 2-0 down, quicker than you could shout svegliati! This time City attacked down their left as Caroline Weir drove at the defence and fired a low cross towards the near post, where Ellen White was on hand to finish. The visitors looked utterly shell shocked and could have been three down in seven minutes had White converted her header or Kelly finished at the near post. City were rampant.

To their credit, they regrouped and held out until half-time as the hosts probed for a third. That goal didn’t come until the 89th minute as Kelly, the standout player on the night, played a cross to the back post for Sam Mewis to head home. Gareth Taylor’s side are targeting Champions League glory this season and now they, barring a disaster in the second leg, are through to the last eight, improving on their round of 16 exit to Atletico Madrid last term.