Chelsea put in yet another impressive defensive performance under Thomas Tuchel to go through to the quarter-finals of the Champions League for the first time since 2014, beating Atletico Madrid 2-0 at Stamford Bridge and 3-0 on aggregate.

The Blues are proving to be an increasingly tough team to break down as of late and have only conceded two goals in 13 games under the German manager who replaced Frank Lampard at the helm in January. In fact, Tuchel’s side haven’t conceded in nearly 10 hours of football.

Chelsea began the brighter of the two teams in a surprisingly fast-paced first half. Tuchel had mentioned Yannick Carrasco as a big threat for Atletico in his pre-match interview but the Blues did a great job of nullifying him in the opening stages. Joao Felix too, Atletico’s leading attack threat in the Champions League this season with three goals, was similarly stifled with N’Golo Kante keeping him in check.

Simeone was in typically animated fashion throughout. None more so than when Chelsea dodged a huge bullet after Cesar Azpilicueta senselessly brought down Carrasco in the box. VAR, however, was nowhere to be seen and the Argentine manager was left utterly seething. 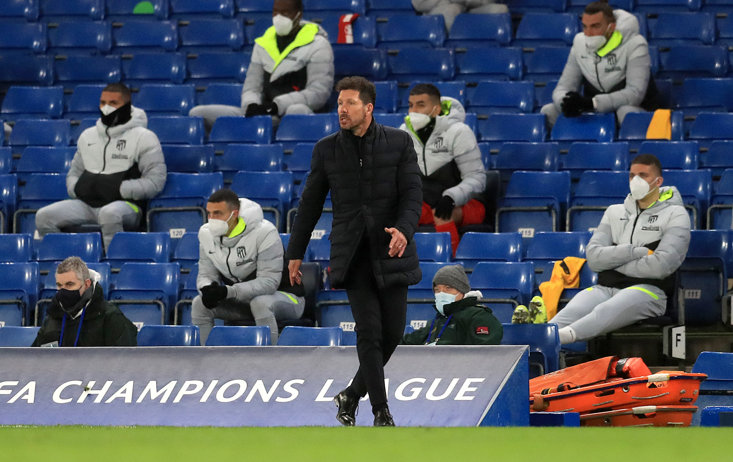 Moments later, Chelsea added salt to the wound when Hakim Ziyech opened the scoring for the home side. Kai Havertz, showing good strength and awareness, played in Timo Werner down the left, who fed the ball to the advancing Ziyech in the centre, who then fired beyond a helpless Jan Oblak.

Atletico entered the second half with more attacking intent but were ultimately sloppy in possession. Chelsea remained professional though, giving Atletico no time or space on the ball, and were especially dangerous on the counter-attack. Reece James, who was brilliant all night, nearly assisted Ziyech just before the hour mark but the Moroccan’s left-foot shot was tipped over by Oblak.

With ten minutes to go, things went from bad to worse for Simeone’s side when Stefan Savic was shown a straight red for a soft elbow on Antonio Rudiger, who’s reaction was… let’s say theatrical. Chelsea wrapped a stunning performance against the La Liga leaders when Emerson latched on to a Christian Pulisic pass and smashed it into the corner. 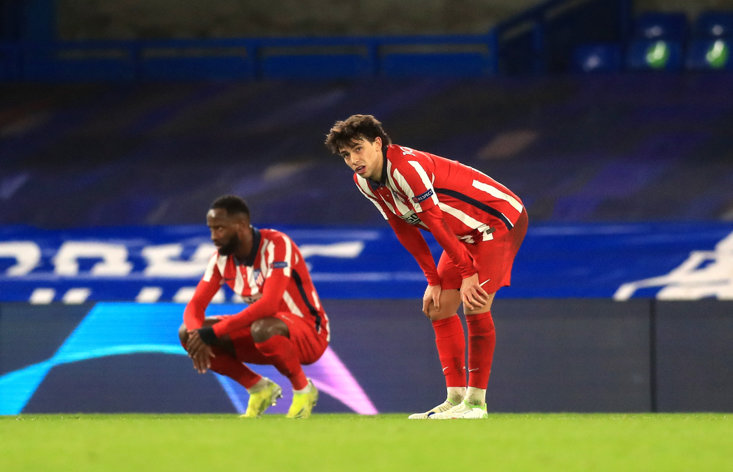 It was a hopeless night in all honesty for Atletico, who are in desperate need to finish their season on a high. Felix was poor, though he did give Chelsea a scare in added-time, and Luis Suarez, who hasn’t scored in the Champions League for 461 minutes now (and 25 away games in the competition), was hauled off with 30 minutes remaining.

For Chelsea however, it was a solid performance across the board and the feel-good factor is in full-swing under Tuchel. Havertz, Werner and James were all stand outs whilst Kante and Mateo Kovacic filled the gap created by the missing Jorginho with aplomb.

Speaking after the game, Tuchel said, "The amount of effort intensity was incredible and outstanding in both games. We missed key players today but everybody else stepped up, huge suport from the bench and the stands. It is hard, hard teamwork and I am very happy."

Simeone, meanwhile, believes the right team won, stating, "We tried to go and press them, but they were able to get out of it, and we could not keep up with them.

"You have to congratulate your opponents when they are the better team. We tried to press them up the field, worked hard. We couldn't attack the way we like."

Elsewhere in the Champions League, Bayern Munich cruised through to the quarters beating Lazio 2-1 at the Allianz Arena and 6-2 on aggregate. The goals came courtesy of Robert Lewandowski, who has now scored five goals or more in the tournament in nine successive seasons, and Eric Choupo-Moting with Marco Parolo snatching a consolation for the Serie A side.