Football
News
Thomas Tuchel's side ran out 1-0 winners in a tight affair at Wembley on Saturday evening
Kieran Spratt
19:38, 17 Apr 2021

Manchester City’s unprecedented quadruple dream came crashing down on Saturday evening after they were beaten 1-0 by Chelsea in the FA Cup semi-finals at Wembley.

Guardiola’s men had been chasing an unfathomable quad of silverware this season - with the Premier League all but wrapped up, the League Cup final next week and a Champions League semi-final with PSG on its way - but they were denied the FA Cup and an epic slice of football history by an excellent Chelsea side, who gave their opponents fits across the 90 minutes.

It was an unfitting first half for an FA Cup semi-final with very little splitting the two sides in a very cagey opening, although this was perhaps unsurprising given both teams had been on Champions League duty over the last couple of weeks. In a drab first 45, Chelsea had the ball in the back of the net when Ben Chilwell launched the ball over the top for Timo Werner to race clear of City's high line. The cross was fired first time into the net by Hakim Ziyech but the flag was raised for offside.

The best and only real chance of the half fell to Chilwell, who collected a perfectly weighted cross from Reese James but his sliced effort could only crash into the side-netting. Mercifully, the second-half could only get better.

City were dealt a big blow soon after the break when their talisman Kevin de Bruyne was forced off with an injury after an awkward landing on his ankle as he tried to keep the ball in play. His replacement however, Phil Foden, provided a much-need spark for the Cityzens that was desperately lacking in the first half.

Last year’s runners-up Chelsea finally broke the deadlock ten minutes after the break. In an almost carbon copy of the goal that was disallowed in the first half, as Mount Mount fed through a pass for Timo Werner to chase, who then laid it on a plate for Ziyech to tuck home. 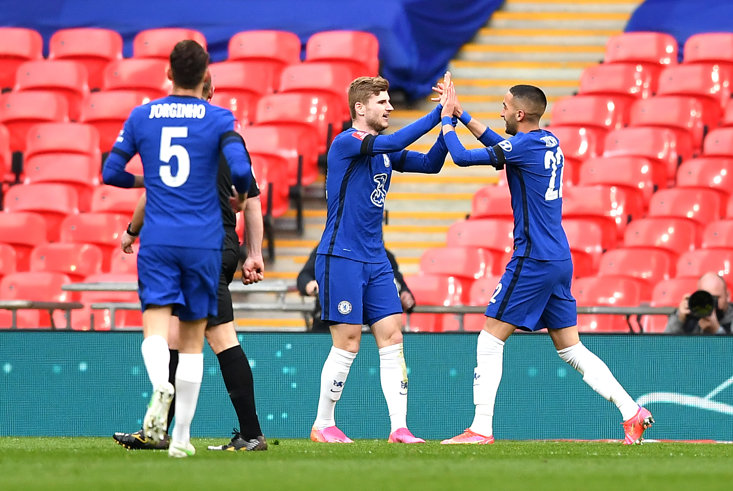 Man City were lucky not to go 2-0 down almost immediately after. Their defence was found lost at sea once again as a long searching pass skipped past Ruben Dias, leaving Ziyech, the games’s Man of the Match, with only the goalkeeper to beat but Zach Steffen did well to get down and make a big save with his feet.

Christian Pulisic very nearly wrapped up the win for Chelsea in extra time. The US international embarked on a slaloming run across the edge of the penalty box and reversed his shot beyond Steffen but the offside flag was again raised.

Going a goal behind gave Man City a much-needed jolt and they started to grow into the game, smothering Chelsea with their passing and possession, but the Blues remained resolute - a testament to the incredible work Thomas Tuchel has made on the backline since replacing Frank Lampard in January.

It was an excellent tactical performance from the German manager and the Blues defended stoutly, giving City little more than a sniff at goal throughout. The Blues now move on to their fourth FA Cup final in five years, and will face either Leicester City or Southampton on May 15.

Speaking after the match to BBC Sport, Tuchel said, "It was a very, very strong performance. [I'm] very happy and proud.

"We played an excellent 35 minutes in the first half. We had to suffer for ten minutes. We then played another 30 minutes so strong and got the lead, could have got another. It was a very strong performance and I am very proud of my team. Very happy they performed to this level today. I am happy. Everybody who is on the pitch needs to perform.

"A good defence is also having the ball and ball possession. It is a very good clean sheet. We were not lucky to escape with a clean sheet, we worked hard for it.

"The guys are ready to cover for each other if anyone loses a duel. We wanted to be brave today with the ball and against the ball and we did it. So happy."