Football
News
The Blues are just three games away from creating history...
Simon Lillicrap
12:00, 05 May 2021

Chelsea Football Club are just three games away from making history. History that could well stand the test of time and be used as a barometer for other clubs in the future. Of course, we are talking about the Champions League double, not winning back-to-back titles, but achieving the biggest prize in club football in the same season with both the men’s and women’s teams.

Emma Hayes’ side have completely dominated the female game this season and are on their way to completing a clean sweep of five trophies in one remarkable campaign. They have already won the Community Shield and League Cup, have to win their final WSL game to become domestic champions and are into the fifth round of the delayed FA Cup.

But their most impressive achievements, like the men’s side, have come on the continent. They have faced a seriously tough run and come through unscathed, after some dramatic performances. In the last 16 against Atletico Madrid, goalkeeper Ann Katrin-Berger pulled off some penalty heroics, saving two spot kicks in the first leg as Chelsea won 2-0 despite playing 80 minutes with ten players.

In the last eight, they faced a talented Wolfsburg side who lost in last season’s final to Lyon and have lost just one league game all season. Chelsea dismantled them, winning 5-1 over two legs thanks to the attacking talents of Pernille Harder, Fran Kirby and Sam Kerr. Bayern Munich lay in wait in the semi-finals, the only side to have beaten Wolfsburg domestically this season and Chelsea attempted to get over their semi-final hoodoo.

They’d lost at this stage in the previous two campaigns and having lost the first leg 2-1, it seemed as if once again they would fall short. But this time things were different. The second leg was a complete display of Chelsea dominance, when it really mattered. Hayes managed to steer her brilliant side to a 4-1 win, with the decisive third goal coming from Harder in the 84th minute. Now defeated 2019 finalists Barcelona await, as Chelsea are just one game away from winning their first ever Champions League title after Lyon had dominated the competition by winning five in a row. 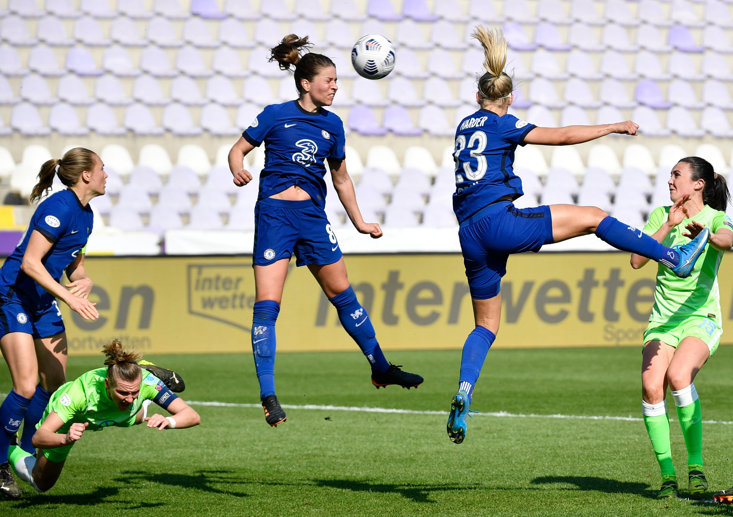 The job manager Hayes has done this season cannot be underestimated, while the men’s team has also enjoyed a revival under Thomas Tuchel. Since his arrival Chelsea have lost just two games, are in the FA Cup final and tonight, have a serious chance to make it into the Champions League final against Manchester City.

Having already beaten Pep Guardiola’s side in the FA Cup this season, Tuchel will be desperate to get past Real Madrid and have the chance to repeat the feat for the biggest trophy in club football. It is one that he has never won before and having been a defeated finalist with PSG last season, he will want to avenge that loss this time around.

Chelsea hold that all-important away goal after a 1-1 draw in Madrid, but it is the attacking talents of Christian Pulisic, Timo Werner, Mason Mount and the resurgent Kai Havertz that could see them through. Roman Ambramovich’s side won this tournament for the very first time in 2012 on penalties but if they get through tonight, the club are just two games away from completing the very first Champions League double in a single season.

With the emergence of the women’s game and the fact that more big clubs such as Chelsea, Manchester City and Barcelona are investing into their women’s teams, this double could well signify complete dominance of the sport in the future. If Chelsea can become the first club to pull this off, their name will forever be etched into the history books.