The English clubs avoided each other in the Champions League quarter-final draw, with Manchester City and Chelsea to meet in the final four, should they get past their illustrious opponents from Madrid.

Chelsea beat Lille 4-1 on aggregate and will now face Real Madrid, who pulled off that unlikely comeback against PSG thanks to a brilliant hat-trick from Karim Benzema. Thomas Tuchel will be hoping to repeat the feat of last season, where his side cruised through the knockout stages before defeating Manchester City in the final.

Manchester City thumped Sporting CP 5-0 and will now try and do what Manchester United could not, and knock Atletico Madrid out of the Champions League. Diego Simeone pulled off a game management masterclass in Manchester this week, but can he repeat the feat against Pep Guardiola’s elite outfit.

With no Cristiano Ronaldo or Lionel Messi in the last eight after Manchester United's defeat at home to Atletico Madrid and PSG’s collapse in the Spanish capital, there is a chance for new heroes to grab the spotlight.

Benfica are perhaps the surprise name in the draw after they dumped out Ajax with an impressive away performance and they will take on Liverpool, while Villarreal’s reward for thumping Juventus 3-0 in their second leg is a tie against Bayern Munich. 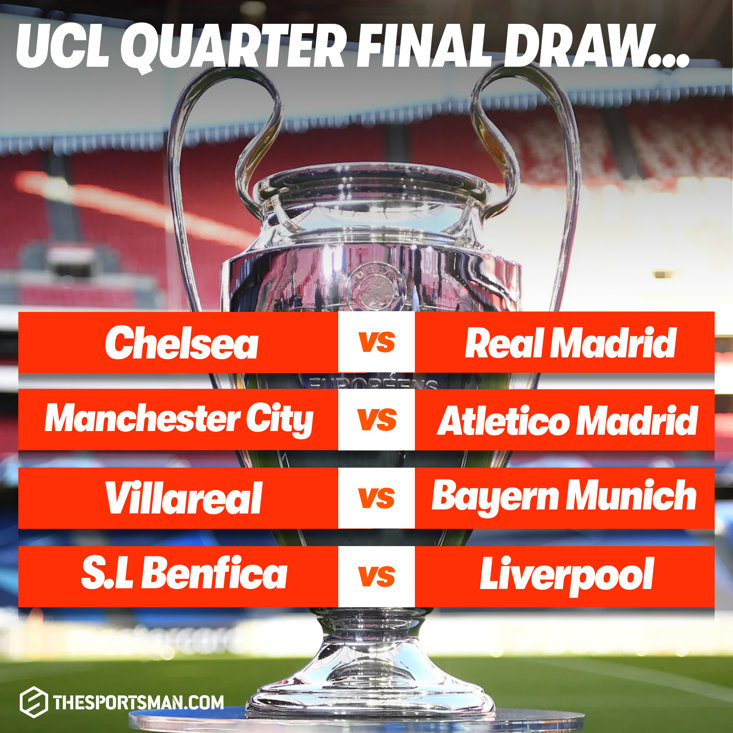 Jurgen Klopp’s Liverpool will be confident of getting past Benfica, especially with the second leg at Anfield, but they could face a huge test in the final four. Bayern Munich, fresh from scoring seven past RB Salzburg in their second leg, have been drawn against Villarreal and should both teams get there, we are set for a Liverpool vs Bayern Munich semi-final.

On the other side of the draw, Manchester City could face Chelsea or Real Madrid in the semi-finals, if they get past Atletico Madrid. Of course, the other possibility is that we could see a Madrid derby in the semifinals of the Champions League, if they can knock out the English duo.