35 seconds. That’s all it took for Chelsea’s Champions League dream to unravel. Just 35 seconds. There was so much promise, so much hope, yet in Gothenburg, it all fell apart. In 35 seconds. The unfortunate hilarity of the early own goal might have been enough to draw a smirk from the cold-hearted neutral had it not been so utterly devastating for Emma Hayes and her talented side in their very first Champions League final.

That goal may have come within the opening minute, but it shook Chelsea to the core. The first half was a complete and utter write off. Melanie Leupolz was the unfortunate midfielder to score the own goal after the insatiable Lieke Martens had struck the bar. Chelsea failed to clear and Fran Kirby kicked the ball against her own player, before watching it loop over Ann-Katrin Berger in the Chelsea goal.

Barcelona had appeared on this stage in 2019, conceding four goals in the first half against eventual champions Lyon, and they seemed keen on inflicting the same damage to Hayes’ side. A nightmare start got worse as minutes later Barcelona were awarded a very fortunate penalty as Leupolz was judged to have fouled Jennifer Hermoso in the box, and Alexia Putellas converted with ease. It could have been more in truth, but after 22 minutes the third goal came.

Unlike the previous two, there was no hint of fortune about this one. Martens breezed down the left wing before Hermoso played a one touch ball through to Aitana Bonmati who finished past the helpless Chelsea keeper, who had been so pivotal to her side in their run to this final. Barca looked like they would score with every attack, and it was four before 40 minutes had been played. 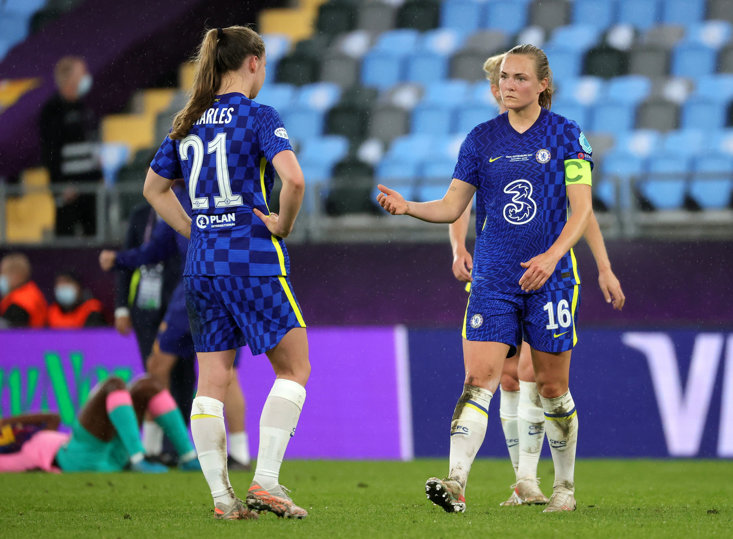 Martens made a tough Chelsea defence look like rookies as she once again tore down the left, before squaring to Caroline Graham Hansen, to settle the final before the break. It was an impossible job for Hayes and her side after the break. Barca have only conceded five league goals in 26 league games this season and Chelsea needed to match that in one half of football to win the European Cup.

It wasn’t to be. It was a spirited second half but Barca defended comfortably and so Chelsea’s season ended in heartbreak. They’ve won everything there is to win in the English game but just came up short against what we now have to say, is the world’s greatest team. Emma Hayes has proven herself to be one of the finest managers in the game but ultimately, her side seemed overwhelmed by the occasion early on and key moments went against them.

It is tough to take right now, but this has been a remarkably successful season for Chelsea. The progress has been absolutely remarkable, but they just came up short on the night. The hurt and the agony they must feel right now must be used as a learning opportunity, so if they make it to this stage again, they come out as victors.

Barcelona are European champions for the very first time, and in truth, it only took 35 seconds.