Football
News
The Blues are aiming to win the Champions League for the first time since 2012
Elliott Bretland
14:00, 13 Apr 2021

Chelsea manager Thomas Tuchel has urged his team not to ‘get lost in dreams, hopes and speeches’ ahead of their Champions League Quarter-final second leg tie against Porto and insists the time is now to win the competition.

The German took charge at the end of January but dismissed talk of any three or five-year plan, demanding the Blues give their all to win Europe’s premier tournament this May, nine years after their first Champions League triumph.

Despite playing both Porto matches in Seville due to Covid restrictions, Chelsea earned two crucial ‘away goals’ in the first leg and Tuchel and his team are focused on getting the job done on Tuesday night to reach the last four.

“We are in the second leg of the quarter-final of the Champions League, you will not find any team who does not have the goal to reach the semi-final,” he said. 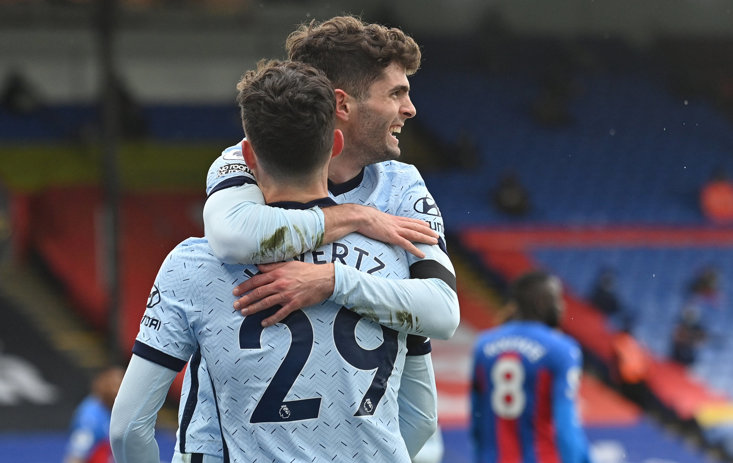 CHELSEA CELEBRATE DURING THEIR VICTORY OVER Crystal Palace

“There is nothing to hide. This is a club that has a culture, a structure, to win titles and win games consecutively. Chelsea is the club that has the culture and the history and mentality to do so.

“I am here to win titles, I am here to win games and as a result, win titles. This is what I demand of myself so why should we now say anything different? If you want to win in five years or three years, I don’t know what that is.

After facing Porto, Chelsea take on Premier League leaders Manchester City in the semi-final of the FA Cup on Sunday making this week their biggest of the campaign so far. Having recovered from their shock 5-2 defeat against West Brom with a 4-1 win over Crystal Palace, the Blues are back on track

“Everybody can wreck their heads about it, but we are there to play football,” Tuchel added as he discussed a huge seven days. “This is the target, and the challenge actually, to keep focus.

“If we want to finish the season with a trophy, we'd better win both matches. Otherwise it could be difficult. It doesn't help to reflect too much about it, we have to play these games, but it's most important for me to be fully focused on what we do, and forget that we have a lead from the first leg because it's the past.

“There's nothing less interesting in football than the past. Everything that counts in football is the next match, the next competition.”

The time is now for Chelsea.