Manchester City’s title party has been put on ice as Chelsea came from behind to score a last minute winner which secured a 2-1 win for Thomas Tuchel’s side. Pep Guardiola was left furious because Sergio Aguero missed a Panenka penalty when City were 1-0 up as his side lost when winning at half-time for the first time since December 2019.

Man City made nine changes from their Champions League semi-final success and lined up in an experimental 5-1-4 formation. Aguero was joined by Gabriel Jesus, Raheem Sterling and Ferran Torres in attack while Rodri was left to patrol the midfield on his own. Remarkably, in the first 45 minutes, it seemed to work.

After a first half of few chances, City broke the deadlock thanks to a mistake. Andreas Christensen failed to clear the ball and was injured in the process as Gabriel Jesus pounced. The Brazilian squared the ball for Aguero to tap home but instead he took a terrible first touch and was only bailed out by the oncoming Raheem Sterling, who fired the ball into the net to put City in front.

With Christensen's replacement Kurt Zouma still waiting on the touchline trying to get on, Chelsea imploded as Billy Gilmour tripped Jesus in the box, leaving Thomas Tuchel fuming on the touchline. Aguero stepped up but his nightmare of a first half continued as his attempted Panenka backfired, and Edouard Mendy got up to stop it.

In the second half, Tuchel’s side came out full of vigour and energy. Christian Pulisic and Timo Werner both had a go with off target efforts before the equaliser came. An onrushing Cesar Azpilicueta, who now has five more assists than any other Chelsea defender in Premier League history, teed up Hakim Ziyech who fired home from range. Ziyech had scored the winner when the two met in the FA Cup semi-final and repeated the trick here with a low left-footed drive into the bottom corner. The champagne was on ice for Manchester City’s title party.

Chelsea continued their second half resurgence, even after Phil Foden and Ilkay Gundogan were introduced from the bench. Werner rounded Ederson to finish smartly but his laziness saw the goal ruled out for offside, while Chelsea were left to rue the linesman’s flag again minutes later as substitute Callum Hudson-Odoi slammed home Reece James’ cross. VAR confirmed both decisions were correct. 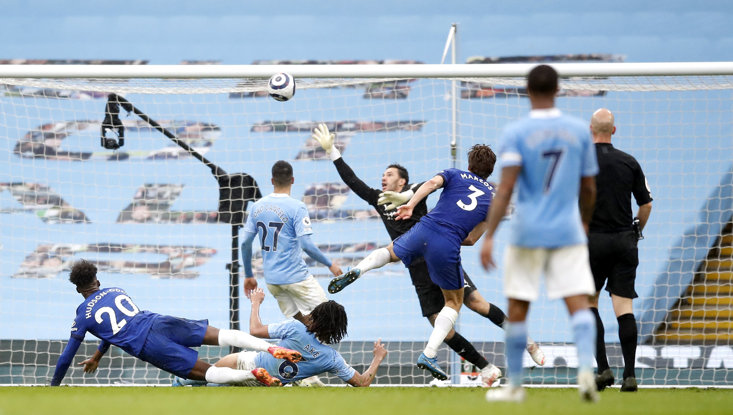 Certainly a positive for Tuchel will be how his side played in the second half, even without the growing influence of Mason Mount. This season the Englishman has emerged as Chelsea’s key man in midfield, yet the quartet selected to start today performed admirably, as did Jorginho and Hudson-Odoi off the bench.

Sterling felt certain he should have had a penalty when he was felled by Zouma, before Marcos Alonso’s chip just missed the target. However, the Spanish wing-back would get the last laugh in added-time after Werner made inroads down the City left, an area where Chelsea enjoyed success all afternoon.

The German beat his man before pulling the ball back and a mixture of Hudson-Odoi and Alonso bundled somehow got the ball past the diving Ederson. It wasn’t the cleanest of finishes but it marks another incredible win for Chelsea, who are looking unstoppable under their German boss.

In terms of personnel, the two teams were almost unrecognisable from the two that will line-up in Istanbul, but if they provide this level of drama at the end of the month we are in for a treat. Tuchel’s Chelsea have met Guardiola’s champions elect twice in the past four weeks. He’s won two from two and if he can make it a hat-trick then Chelsea will be European champions.