Football
News
However, the game was overshadowed by even more VAR inconsistency
Kieran Spratt
19:45, 24 Apr 2021

Chelsea strengthened their grip on a place in the Premier League’s top four with a hard-fought 1-0 victory over fellow high-fliers West Ham at the London Stadium.

Thomas Tuchel’s men had to dig deep to overcome a Hammers side that hadn’t lost at home since the end of January and although they deserved the three points on the balance of things, they we’re definitely given a helping hand by more inconsistency from VAR.

The win means Chelsea stay fourth, but move three points clear of fifth-placed West Ham. They are now four points clear of Liverpool, five clear of Spurs and six ahead of Everton.

After a cagey first half, which West Ham just about edged, Chelsea found a breakthrough moments before the break. Timo Werner started the move, holding off the challenge of Angelo Ogbonna before laying the ball off to Christian Pulisic. The American quickly spread the play to Ben Chilwell, who picked out Werner just outside the six-yard area. The German made no mistake to slot past Lukasz Fabiański for his first goal since February.

Werner missed a glorious chance to double his tally ten minutes into the second-half after Mount, who was about 25 yards from goal, was denied by a fabulous Fabianski save. However, the ball rebounded out to Werner but he rolled the ball wide of the far post. Tuchel’s dismay from the Chelsea sideline said it all.

David Moyes’ men were given a mountain to climb when Fabian Balbuena caught Chillwell’s leg with a clearance. It certainly didn’t look malicious but VAR intervened and referee Chris Kavanagh brandished a red. Even some of the Chelsea players looked confused by the Paraguayan’s dismissal. 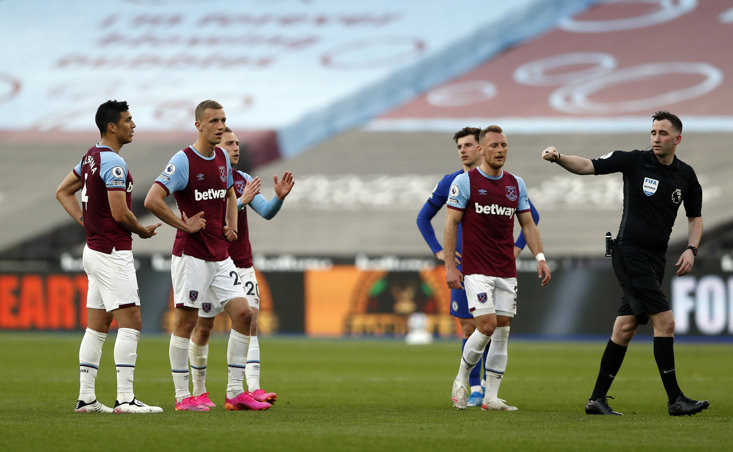 Fabian Balbuena is given his marching orders by referee Chris Kavanagh

The inconsistency with VAR has been a key talking point since its introduction into the Premier League and this was shown again when Vladimir Coufal did exactly the same thing that Balbuena did to get sent off, kicking through the ball and catching Antonio Rudiger - this time, thankfully, there was no punishment.

Despite the sending-off, West Ham continued to threaten but just couldn’t break down a Chelsea side who have been in imperious form defensively since Tuchel replaced Frank Lampard in January. The German manager is now unbeaten in all ten away matches with the Blues, only the second manager in Premier League history to do so, after Claudio Ranieri with Leicester City in 2015.

Speaking to Match of the Day after the match, Tuchel said, "It was a six pointer. The win was well deserved. We played amazing in the first half. We did not come out of the dressing room with the same intensity as in the first half. We suffered a bit with their intensity, but I think we deserved to win. It’s a very important win.

The Blues will also be buoyed by the news that Liverpool were unable to make up any meaningful distance on the top four after suffering a last-gasp equaliser to Newcastle United at Anfield earlier in the day.

West Ham certainly aren’t out of the race for a place in Europe, but with five games to go they definitely have a fight on their hands.

Moyes blasted the red card decision, telling Sky Sports, “I think it’s a decision made by somebody who has never played the game. I don’t know where Fabio Balbuena is supposed to plant his foot.

"If they do think that, then you’ll look at the one a few minutes later which was the same with Vladimir Coufal and Rudiger – it was a very similar challenge but they never did anything about it, so is there a consistent message to both of them?

"I don’t see how it’s a red card. He’s kicked through the ball, I don’t think for one minute there’s a bit of malice in that trying to catch him. I thought it was a rubbish decision."