Football
News
In Frank Lampard, The Blues might just have a manager who can beat the boardroom and stay in the job
Rebecca Knight
19:00, 25 Oct 2019

After the first game of the Premier League season, had Chelsea fans decided to club together and buy new manager Frank Lampard a copy of ‘Management for Dummies’, they’d have been forgiven. Considered entirely reasonable, even.

The loss to Manchester United was a bad start and, in hindsight, Chelsea must be kicking themselves after being beaten 4-0 by a side who have since won only once in the Premier League. The way Lampard set his side up that day made him look as green as the colour of the Old Trafford grass. The attacking ethos and high tempo football was lauded, but the way their midfield was cut through resembled a hot knife slicing through butter.

The midfield had, of course, been the major bone of contention under Maurizio Sarri, and the role of N’Golo Kante became the talking point.

Playing Kante out of position, picking Jorginho as the defensive lynchpin, using a Matteo Kovacic who Real Madrid didn’t want... it just didn’t work, and that’s before you even take a look at the way Sarri treated the Chelsea youth players – specifically Callum Hudson-Odoi, who, had it not been for Lampard coming in and a dreadful injury which ended Bayern Munich's advances, they could well have lost this summer.

The crowd hated it, the board were clearly unhappy and there were issues on and off the field, most notably when goalkeeper Kepa Arizabalaga’s refused to be substituted in the Carabao Cup final. The Italian was a dead man walking, and the sales of tobacco in west London must have been through the roof.

You get the feeling the club and fanbase never really gelled with Sarri, let alone the players, and ‘SarriBall’ became the Stamford Bridge equivalent of a swear word – in fact, it was often chanted in conjunction with one, as ‘f*ck SarriBall’ was heard more than occasionally. Things were not good, and even now the mention of SarriBall gives some Chelsea fans PTSD.

On paper, a third-place finish behind two outstanding teams, a Europa League win and a cup final looks a decent season, but in reality Sarri’s position was untenable and the fans would have taken sixth place with Frank Lampard and no trophies over another season of that.

In came Lampard, arguably their greatest-ever player, and reactions ranged from jubilation to concern Lampard was too young and inexperienced. 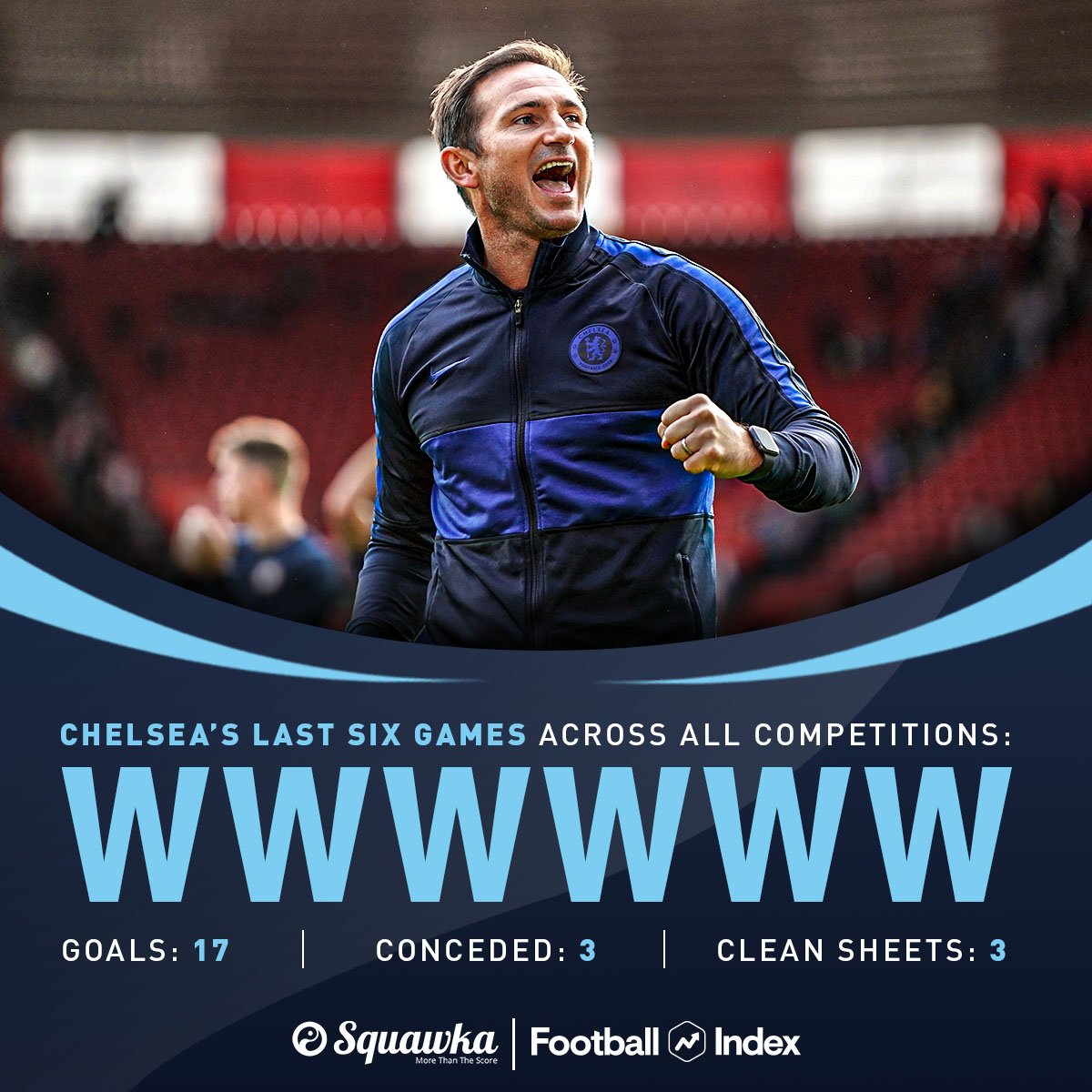 However, Chelsea were under a transfer ban, the board had run out of managers to turn to and the fans wanted a legacy, a new manager, a new style of play. Right from the off against United, that was evident, and while the result was lacking the youth on the field certainly wasn’t.

Upon arriving at Chelsea, Mourinho told Lampard he believed in him, he could be the very best in his position, and in Jose’s eyes he really was. It’s that bond Mourinho had with his players that Sarri could never harness which Lampard has formed so well, not only with the youth players but also with those who were devoid of confidence and love from the fans. Jorginho and Kovacic look like different players this season, the latter of whom would now walk into Real Madrid’s side – and how apt that the maestro of Chelsea’s midfield for so many years has got them singing from a beautiful songbook once again. He also managed to navigate what could have been tricky waters with the likes of Willan and Cesar Azpilicueta.

Lampard has the backing of the board, the love of the fans and the respect of the players. The pieces may have fallen into place for Lampard to get this chance, but there’s no mistaking the fact he has made the most of it.

Chelsea might hire and fire with more ruthlessness than Alan Sugar, but in Frank Lampard they might just have a candidate who can beat the board room and stay hired.

More
football
‘The Red Apprentice’ Explores Solskjaer’s Surprising Path To...
To many, Ole Gunnar Solskjaer was a shock choice to relieve Jose Mourinho as manager of Manchester United, [ ... ]
football
Dazzling In Europe Again, But It's Time For Man Utd To Up Their...
In many ways it was a typical Manchester United win under Ole Gunnar Solskjaer, and yet it was also [ ... ]
football
Liverpool Need To Show What They're Made Of During Injury Crisis
Now we’re really going to find out what the Premier League champions are made of. Liverpool’s [ ... ]
football
Enjoy It While You Can - Messi Exit Will Mark The End Of A Clasico...
It has been the centre of the European sporting calendar for the last couple of decades. El Clasico, [ ... ]
football
A Tale Of Two Windows: Chelsea Could Leave Man United In The...
New goalkeeper, check. Commanding, experienced centre-back, check. Attacking quality, check. Chelsea [ ... ]
football
Dion Dublin’s Gaffer Tapes, The Podcast Taking You Inside The...
A good podcast will be a good friend. Whether you’re on a winter run, doing the weekly shop, or [ ... ]
football
Why Raheem Sterling Is Right To Call Out Social Media Over Racist...
“I don't know how many times I need to say this, but football and the social media platforms [ ... ]
football
The Book That Shows Why St Pauli Is A Football Club Like No...
Bayern Munich have won the Bundesliga for the past eight seasons. Borussia Dortmund have been champions [ ... ]
football
Everton Seek First Derby Win In A Decade With A Blueprint Belonging...
They say imitation might be the highest form of flattery, though there is absolutely no love lost between [ ... ]
football
Gary Neville Is The Catalyst For Change The Game Needs Right...
A week is a long time in politics, but a week in the politics of football? Well, that’s another [ ... ]
football
It's Time For Man Utd To Drop Harry Maguire... For His Own Good
Harry Maguire trudged off the Wembley turf looking like he had the weight of the world on his shoulders. [ ... ]
football
Get Off Gareth's Back - Southgate Is England's Best Manager...
Only three managers have ever taken England to World Cup semi-finals. Alf Ramsey won the whole shebang [ ... ]
football
Childhood Dreamer To Fantasy Football, Wenger’s New Book Is...
It really is true. You really don’t know what you’ve lost until it’s gone. He was [ ... ]
football
The Game Needs Premier League 2.0 And Rick Parry Is The Man...
The only thing that's certain is that it’s complicated. You’ll have seen the news that [ ... ]
football
The Nations League Injects Life Into The Tired International...
You might not know your Group A4 from your Group D2, and yes, it might on the face of it be the most [ ... ]
football
England's Under-21s Are Falling Short And Eddie Howe Is The...
If you’re anything like us, you will have been sat pulling your hair out at home on Wednesday [ ... ]
football
Why Red-Hot Calvert-Lewin Should Replace Harry Kane As England's...
When James Rodriguez hit a rocket for Colombia against Uruguay at the 2014 World Cup to become a global [ ... ]
football
Men In Blazers, The Podcast That Proves Americans Are Falling...
A firm fixture of the Stateside calendar now,  ‘Soccer’ has been certified as the fifth [ ... ]
football
Solskjaer Was A Stop-Gap, Pochettino To Man Utd Is Five Years...
Jose Mourinho had just been sacked for a second time by Chelsea, while Manchester United were a complete [ ... ]
football
More Than Just A Name, Five Things You Need To Know About Arsenal’s...
Yes, yes, we’ve seen all the posts and the hashtags, so he’s got a great surname. But there’s [ ... ]
football
High-Scoring, But Low Intensity - Is Covid Football A Bit Too...
We had Tottenham beating Manchester United 6-1, Liverpool losing 7-2 at Aston Villa. To some it was [ ... ]
football
The Numbers That Prove The Women’s Super League Is The Best...
“We can say hand on heart we are the best league because we really are. All the best players want [ ... ]
football
Podcast Review - The Glenn Hoddle Footy Show
A quarter of a century since he last kicked a football professionally, and 14 years after his last coaching [ ... ]
football
Book Review - How To Run A Football Club: The Story Of Our National...
With an extended lockdown threatening the existence of a substantial portion of the United Kingdom’s [ ... ]
football
Thiago, Kalvin Phillips And The Premier League ‘Quarterbacks’...
Thanks for reaching out. You do the math. My bad. Americanisms, you gotta love ‘em. We’ve [ ... ]
football
Wayne Barton's Book On David Beckham Highlights Golden Balls'...
When historians look back at the sports scene at the turn of the millennium, there will most certainly [ ... ]
football
Rosé For Rodriguez, A Bollocking For Bilic, Five Stories You...
Managers can’t manage masks, fans are finding new ways to hail their heroes, and Jurgen Klopp [ ... ]
football
The Covid Defying Smart Helmet That Could Help Unite Football...
After the longest season in history, a mercifully short reprieve for players to catch their breath has [ ... ]
football
Get An Edge On Your Rivals This Season With The Fantasy Premier...
What are you this year? ‘Lallanas in Pyjamas’? ‘Murder on Zidane's Floor’? [ ... ]
football
Neymar's Handbags, Shy Guy Jose, And Other Football Stories...
Just like that, we’re back in the room. There’s new rules (on and off the pitch), and renewed [ ... ]