Day three and as we pass the halfway stage of this year’s Cheltenham Festival, we switch to the more stamina sapping New Course for the final two days.

The smallest field of this year’s festival assemble for the intermediate trip novice chase and a conversation needs to be had as to why such a small field line-up for a £155k grade 1.

But that is for another day and as talented as Busselton and El Barra are, they should be battling it out for third as Bob Ollinger and Gallopin Des Champs put their unbeaten chasing and festival records on the line.

Bob Olinger progressed from a simple chasing debut victory to score convincingly from Capodanno at Punchestown last time, a hind although his jumping hasn’t been totally flawless, we can’t forget how imperious he was in last year’ Ballymore.

GALLOPIN DES CHAMPS was winning a handicap at last year's festival but claimed top honours at Punchestown and has been breathtaking in two wins at Leopardstown this season, the latest a Grade 1 at the Dublin Racing Festival when a couple of main rivals departed. He is rated 3lb better than Bob Olinger over the bigger obstacles and as the slightly bigger price, he is just, and I stress just, the percentage call in a fascinating match up.

The staying handicap hurdle has been dominated by Ireland recently, landing the last six renewals with Gordon Elliott winning three of the last four. He saddles six of the twenty-four runner field with 2019 and 2020 winner, Sire Du Berlais leading his sextet.

Emmet Mullins landed a gamble with The Shunter at last year’s festival in the Plate and his Winter Fog has been fancied for this since running a close second at Leopardstown over Christmas, the qualifying race that has produced five of the last six winners of the Final.

As you would expect there are many chances but my two against the field are ALAPHILIPPE and IF THE CAP FITS.

The form book says ALAPHILIPPE finished only fifth in his qualifier for this from just seven runners, but there was so much more to the performance. It was his first start since fifth in the Albert Bartlett at last year’s festival and he travelled the best into the straight at the head of affairs. He led upsides at the last but got very tired on the run-in and weakened to be beaten by eight lengths. He arrives a fresh horse and the handicapper dropped him 2lb. He surely is better than this mark and I expect a huge run from the 8yo. 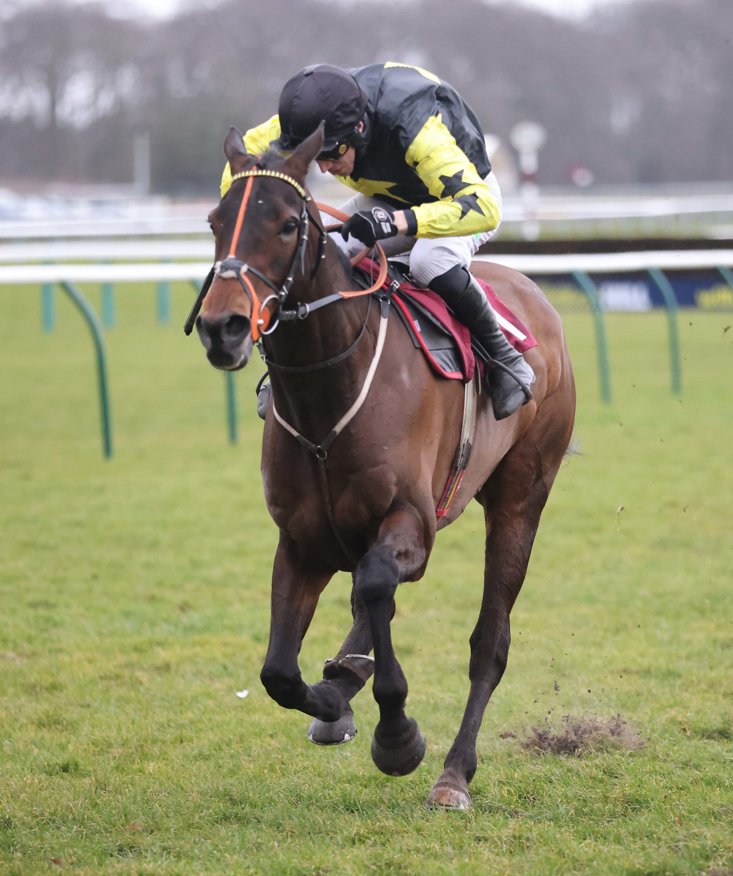 At the other end of the experience spectrum is IF THE CAP FITS. He ran in the Stayers’ Hurdle last year and was once rated as high as 166. The 10yo stayed on strongly at Sandown last time for fifth having looked likely to be detached turning for home and has been dropped another 4lb from that to a mark of 138, his lowest since December 2017. It gives him a huge chance and he is far from a lost cause yet.

Allaho was sensational in winning last year’s Ryanair Chase and it will take a good performance to stop him again. He will be many people’s banker of the meeting and he looks to be even better this season now they have nailed down his trip, winning his last four over 2m 4f.

I will suggest SHAN BLUE each way though for the Skelton’s, who has been off injured since falling in the Charlie Hall Chase at Wetherby in October.

He had a very productive novice campaign, but that busy schedule appeared to catch up with him in the spring when below par at Cheltenham and Aintree. He clearly benefited from a break when going clear at Wetherby in the Charlie Hall and although it was still four from home when he took a crashing fall, he looked like taking the race apart.

He suffered a small injury in that fall, but Dan Skelton decided that he would be kept back for a spring campaign and the recent noises have all been positive. He goes very well fresh, and he could be the one to give Allaho most to think about.

Eldorado Allen won the Denman Chase in good style and the Tizzard horses have run ok at the festival so far, while Conflated, who was 50/50 for a Gold Cup run, is also a big player after his impressive Irish Gold Cup win and should see the trip out very well.

Melon has finished runner-up at four of the last five festivals and can also be relied upon to run his race.

The last three winners will all line up in this year's Stayers’ Hurdle with Flooring Porter, Lisnagar Oscar and Paisley Park all looking for second successes.

CHAMP must defy the negative stats if he is to be the Stayers’ Hurdle champion, but this is a horse that has never really followed a trend.

He burst onto the scene as an excellent novice hurdler which included a second in the Ballymore of 2019, but his eagerly anticipated chasing career never really took off due to jumping blemishes. He still managed to win the 2020 RSA Chase but that was through ability alone as he had half of Cheltenham’s birch stuck in his backside as he surged up the hill to beat current Gold Cup champion Minella Indo and Ryanair holder Allaho.

He missed a chunk of 2020/21 and was pulled up in the Gold Cup with connections opting to revert to hurdles this season with success when he won the Long Walk Hurdle at Ascot. He was then beaten in a bizarre Cleeve Hurdle by Paisley Park but the Henderson team were in double form on Tuesday. I expect him to gain his revenge on him and hold off the Irish challenge to claim a second festival victory despite just one of the last 48 winners being older than nine.

Flooring Porter will no doubt make a game effort from the front to defend his title, while Klassical Dream needs to bounce back from a poor showing in the Galmoy Hurdle, despite beating Flooring Porter over Christmas at Leopardstown.

And then there is Paisley Park. What can we say about him? It looked like his glory days may be over but he has other ideas, even giving twenty lengths to the field in the Cleeve Hurdle in January and then coming with one of those barnstorming runs we’ve become accustomed to and proved the fire still burns bright. He is reportedly blooming at home, working as well as ever and the 10yo could still have a say three years on from his finest hour. 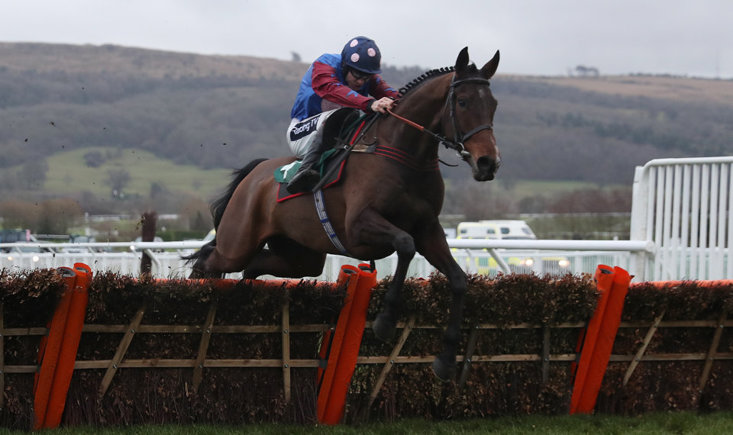 Thyme Hill must get a mention too as one of the unluckiest horses at recent Festivals. He was beaten by Envoi Allen in the 2019 bumper and was very unlucky when switched more than once in finishing a close fourth to Monkfish in the 2020 Albert Bartlett. He was then forced to miss last year’s Stayers’ Hurdle through injury before winning at Aintree.

His Auteuil adventure for seasonal debut didn’t go to plan as he hated the ground before running a cracker when second at Ascot, splitting Champ and Paisley Park. He has been kept fresh for this assignment and he certainly could go close if things finally fall his way.

For such a wide open looking handicap, it’s interesting that the last four winners have been priced at 5/1 or less and the last three winners had all won at Cheltenham earlier in the season.

That points towards Imperial Alcazar who was a convincing winner on Trials Day over this same course and distance and looks to be on an upward curve over fences on what will be just his fourth start over them. He did disappoint when fancied in the Pertemps at last year's festival though and has a big weight of 11-9, more than any other winner of this race since 1977.

THE GLANCING QUEEN, from the same stable as Arkle winner Edwardstone, chased home L’Homme Presse over this track and trip in the Dipper on New Year's Day and has run well on all her three festival appearances. She has a lovely weight of 10-12, jumps well, the stable is full of confidence, and she is the one to be on for me.

Celebre D’Allen is on a four timer after a pair of hurdle wins at Haydock and a gutsy victory over his trip over fences at Warwick and represents the same owner that took this prize in 2013 and 2014. He is up another 6lb though for his latest success and no ten-year-old has been victorious in this race since 2011.

This race should be renamed the Willie Mullins benefit after he claimed the first five renewals, although Henry De Bromhead took last year's contest to continue the Irish domination.

The Colonel of Closutton saddles seven runners in this year’s race with the once raced unbeaten Dinoblue the shortest of them. We have no idea how good she may be after winning at Clonmel on debut eased down, but the market has made her a clear favourite.

Brandy Love threw away her chance in the Solerina Hurdle seven weeks ago by jumping violently left-handed on a right-handed track. Whilst still not ideal, it wouldn’t have such a detrimental effect back on a left-handed circuit and she has huge claims.

Party Central bolted up in a mare’s handicap at the Dublin Racing Festival and the British handicapper has put her up 20lb, so on the figures she enters the picture in a bid to give Gordon Elliott a first win in the race.

I was really taken with NURSE SUSAN’s first two wins, at Carlisle and Leicester and I think she can run well at a big price. 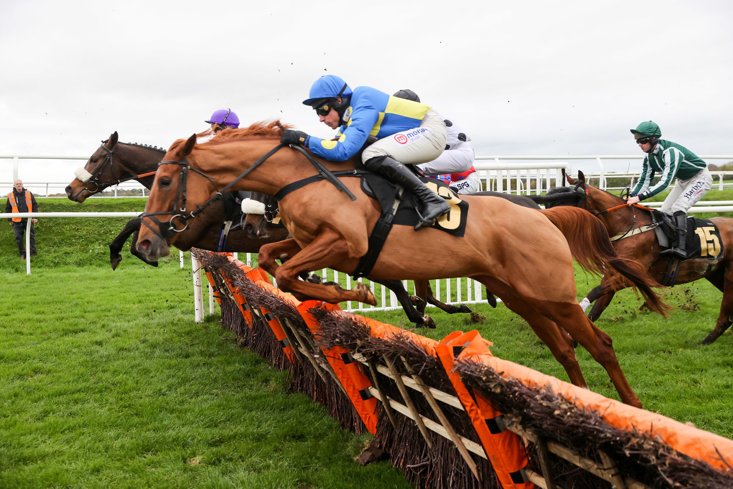 It was heavy when she came off second best to Love Envoi at Lingfield in January, but we know she is a very good horse when the mud is flying, and NURSE SUSAN will be better suited to this ground. She has been overlooked in the market such is the Irish domination, but she could hit the frame for team Skelton.

The one place to start when looking at the Kim Muir is what is Jamie Codd riding, having won the race on four occasions.

This year he is aboard SMOKING GUN who ran an eye-catching third at Fairyhouse five weeks ago and looks to have had an ideal preparation. He relishes decent ground, which it is expected to be by race time, having won the 3m 5f Porterstown at Fairyhouse on it in November. The British handicapper has only edged him up 2lb and Codd is quite sweet on his chances.

His stablemate, Frontal Assault, is likely to head the market under James. He has had just three starts over fences and chased home Tuesday’s disappointment Floueur when last seen in January. The form has been let down, but he ran ok when eighth in the Martin Pipe last year.

School Boy Hours is 8lb higher for winning at Leopardstown over Christmas, but the Noel Meade yard are in fantastic form with 82% of its runners in the last two weeks running up to form.

Come On Teddy, third in last year's Pertemps and fifth in the Dipper on New Years Day, could be best of the British on just his fourth chase start with top amateur Will Biddick aboard.