Minella Indo won the Gold Cup on a thrilling final day of Cheltenham action which saw more winners for Rachael Blackmore and Henry De Bromhead. It closed off a thrilling week of action, and despite their being no spectators in the crowd we were still treated to enthralling races on the track.

The first race of the day followed the pattern of the previous three days as Blackmore, who was crowned the Jockey of the Week, won her sixth race in a brilliant four days. She becomes the first woman in history to claim the prestigious award. Blackmore was on board Quilixios, who went off at 2/1 and lived up to the billing, beating both Zanahiyr and Haut Couloures, who finished in the places.

Next up we saw Belfast Banter secure a shock win in the Albert Novices’ Chase, coming through the field as the favourites flopped in the County Hurdle. It was a strong performance from the Irish pair as Kevin Sexton guided his ride to an impressive win, romping down the final two furlongs. Trainer Gavin Cromwell continued the Irish dominance at this year’s Festival as his grey Vanillier ripped the Albert Bartlett Novice Hurdle apart. He ran from the front to once again take the favourites out of the equation and finish ahead of 40/1 shot Oscar Elite. 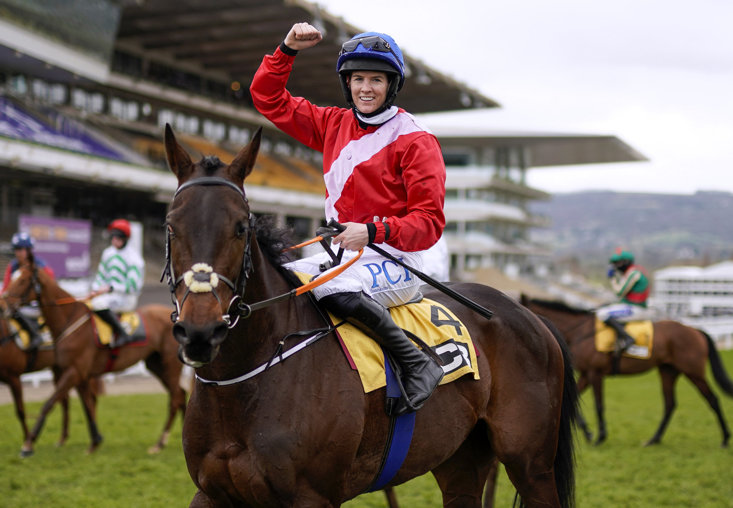 RACHAEL BLACKMORE WON FOR A SIXTH TIME THIS WEEK ON QUILIXIOS

Then came the big one. The Gold Cup. With Al Boum Photo targeting his third successive victory, Native River looking to win as he did in 2018, and Blackmore on board A Plus Tard, there was certainly a hell of a lot of competition, but it was Minella Indo who went out fast and held on to the win. He battled with A Plus Tard to the line as Henry De Bromhead secured a historic treble by winning the Gold Cup, Champion Chase and Champion Hurdle this week, the first time any trainer has achieved that feat.

Jockey Jack Kennedy was absolutely thrilled with his win, in the biggest race of the week. "I can't believe it!” he told ITV. “This is what I've dreamt of since I was a child. I'm so grateful to Henry for giving me the opportunity to ride him. I can't thank them enough and I'll owe them forever. This is what I live for. I can't believe this is happening. I'm delighted."

Minella Indo was roared back to the winners’ enclosure by the trainers and staff, who did their best to recreate the atmosphere that would have greeted him in any other year. It was an emotional win which crowned an incredible week for the Irish and Henry De Bromhead, but they weren’t finished there.

Porlock Bay and Billaway had to be separated in a photo finish in the Foxhunters Chase as David beat Goliath with Lorcan Williams defeated the Willie Mullins favourite, ridden by Paul Townend. It was the closest race of the week as the pair battled all the way up the hill, but the 16/1 shot just nosed ahead of Billaway on the line.

The two favourites did come to the fore in the Mares’ Chase as Townend, on board Colreevy, outfought the favourite Elimay in another battle to the line. Shattered Love tracked the pair in third but couldn’t make an impression as the two Mullins horses fought for the lead.

Mullins needed to win the final two races to win the Trainer of the Week award and that is exactly what happened in the last. Galopin Des Champs came through the field with Langar Dan but found an extra burst having cleared the final hurdle to take the win for Mullins. In terms of raw numbers at least, he has been the most successful, but given Henry De Bromhead’s incredible treble, even Mullins himself would concede to the Irishman.

So in an extraordinary year at the Cheltenham Festival, Blackmore made herself a household name, De Bromhead won all the big races, and Minella Indo wrote his name in the history books with that Gold Cup win.