In terms of horse racing weekends, it’s hard to recall many in recent times in the UK that will be as informative and interesting as this one on the horizon.

Time is running out to get those runs into charges ahead of their festival targets, but the high-class contests come thick and fast over the next 48 hours. Small field G1 chases and big field handicap hurdles with everything else in between, everyone is catered for this Saturday and Sunday.

We will start at Ascot, where the Grade 1 Ascot Chase takes centre stage. The headline act here is Cyrname. Once rated the top chaser in the land, he has won just one of his last four races and was pulled up in the King George on Boxing Day. His halo has slipped slightly, and he’s on a retrieval mission in an admittedly weak looking Grade 1. At this stage I would side with Dashel Drasher who, although engaged at Newbury on Sunday, is a dual CD winner and this track suits front-runners. In a race that may cut up, I would put him up each way at 9/1.

Although there is a Grand National Trial at Haydock (more on that later) the 3.00 at Ascot will also have a bearing on the World’s Greatest Race. Now that the weights are out, nothing has to be masked from the handicapper and prominent owner JP McManus has four contenders in this. Regal Parade is a standing dish in these contests, but has top weight and has now turned 13, so maybe the younger legs of Newtide and Musical Slave may be the ones to be with. Notachance is expected to turn up at Haydock. 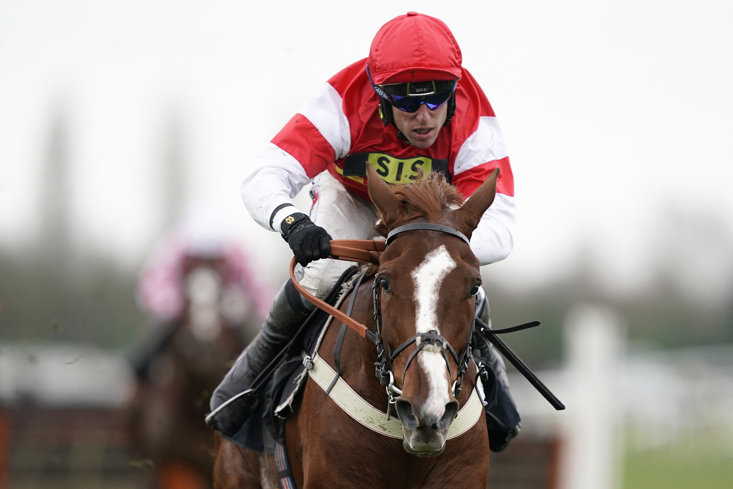 THE BIG BREAKAWAY GOES IN THE REYNOLDSTOWN NOVICE CHASE

The Reynoldstown Novice Chase at 1.50 is a trial for the 3m novice chase at Cheltenham and has three last-time-out winners, and three horses looking to bounce back from poor performances. Demachine won well at the track two starts ago while Kalooki was pulled up in Grade 1 company last time. Hurricane Harvey won well at Doncaster, while Remastered and Full Back are on hat-tricks and Severano has been progressive in handicaps. Nothing stands out in a tight race.

The Grand National Trial at Haydock will not be for the faint hearted. Three-and-a-half miles in heavy ground will see plenty stop long before they swing for home. Two that I like are last year’s runner-up Lord Du Mesnil and the well-weighted Enqarde.

Lord Du Mesnil is only 2lb higher than when second 12 months ago and although beaten 20 lengths in the Welsh National, he is a relentless galloper who has not had his ideal conditions since his effort last year.

Enqarde won cosily at Ascot last time despite jumping slightly right and going this way round will suit. He gets weight of everything in the field and is an unexposed stayer who looks like a severe stamina test will suit.

There are plenty of other trials on the card too, with Albert Bartlett and Foxhunters contenders lining up later on the card, while the Juvenile hurdlers will look to book a ticket to the Triumph in the Victor Ludorum that pits Finale runner-up Nassalam take on the promising Monmiral.

There is a Pertemps Qualifier too for the staying hurdlers, as well as the G2 Rendlesham over the same track and trip which is a trial for the Stayers’ Hurdle at Cheltenham. Last year, Lisnagar Oscar sprung a 50/1 surprise at the festival, and he is back at a happy hunting ground to put the finishing touches on his title defence despite a poor season to date. He will face the likes of Emitom, who has had his chase campaign aborted after a pair of defeats and one of the seasons sensations Main Fact, who rattled off a nine-timer before defeat in the top grade at Ascot. 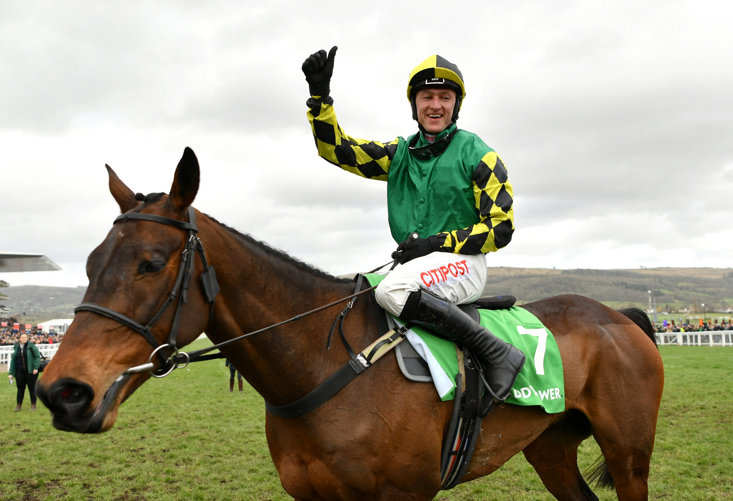 LISNAGAR OSCAR WAS A 50/1 WINNER AT LAST YEAR'S FESTIVAL

Over at Wincanton, the prospective Champion Hurdlers go on trial in the Kingwell Hurdle. Song For Someone beat subsequent Christmas Hurdle winner Silver Streak in the International Hurdle in December so has solid credentials but has to concede 6lb to Goshen, who looks to get himself back in the Champion Hurdle equation.

Don’t forget, and it still pains me, he was miles clear when unseating Jamie Moore at the final flight in last year’s Triumph Hurdle and would have smashed that field to bits, the form of which hasn’t worked out too badly at all. That mishap has clearly dented his confidence as he hasn’t been the same horse since, but this is one last opportunity to book his ticket and if he bounces back to that form he can really shake up the market for the day one feature.  If Goshen wins well, his price will tumble for the Champion Hurdle, yet its hard to see him lining up if beaten, so maybe play speculatively at 16/1 in that market non-runner no bet.

So, after Saturdays non-stop breath-taking action, inhale deeply, relax overnight and get set for more pulsating stuff on Sunday.

Newbury salvaged their ‘Super Saturday’ card and now have a ‘Super Sunday’ ahead.

We will start with the Denman Chase, in which Clan Des Obeaux is likely to be a warm order. He has no Gold Cup on his agenda, Aintree will be his main destination this spring, but there is no doubt he is better going right-handed and can be taken on. Lostintranslation needs to get back on track after a couple of below par efforts while The Conditional can outrun his price as he warms up for a tilt at the Grand National. The favourites stablemate Secret Investor could also go close in a race more open in think than the market suggests.

The Game Sprit Chase lost one Nicky Henderson high-profile runner in Altior but gained another in Gold Cup contender Champ. This is an intriguing move dropping back in trip for a horse whose chasing career has been littered with jumping frailties. He may just be going a yard too fast, but Newbury is a course where he is unbeaten in three visits and connections believe he will have an easier race over two miles than a slog over three miles just three-and-a-half weeks before his ultimate target.

He will face the Haldon Gold Cup winner Greanateen, last year’s runner-up in this Sceau Royal, and both Magic Saint and Fanion D’Estruval who were first and second in a Cheltenham handicap earlier in the season. The latter was also very impressive on his British debut at Newbury last season. 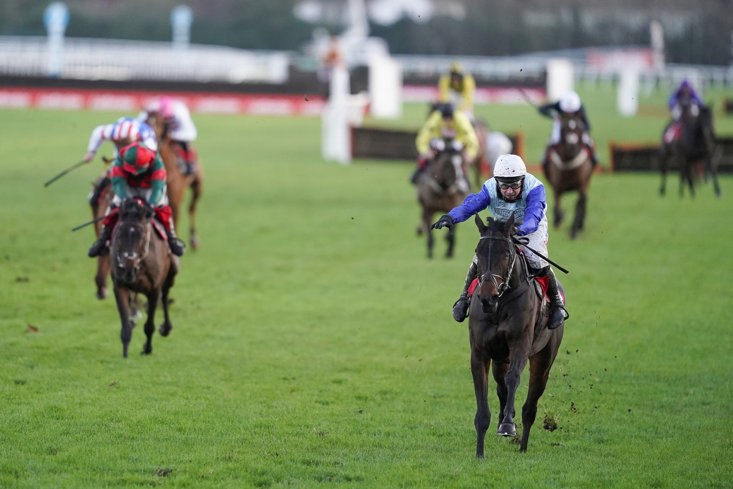 CADZAND IS AMONG MILKWOOD'S CHALLENGERS IN THE BETFAIR HURDLE

The Betfair Hurdle will take most money this weekend as the big betting race. Punters love nothing more than solving a big handicap puzzle, and this is one of the season’s highlights in this sphere. Novices have a great record in this contest, with the likes of Menorah, Kalashnikov and Get Me Out Of Here performing well both here and in the Supreme at the Festival.

This year that brings the likes of Cadzand, Soaring Gory and Mister Coffey into the equation. I quite like the claims of Milkwood though, despite the rain that is forecast for later this week. He was travelling so well over track and trip in November before being badly hampered two out, and still was only beaten by two lengths, despite losing much more at a crucial point. The winner went on to be second in Grade 2 company and, at around 14/1, I think he is worth an each-way punt.

There are some other great handicaps on the card at Newbury, while Market Rasen plays host to a rescheduled Sidney Banks Novices Hurdle, rescued from Huntingdon’s recently abandoned meeting. Nassalam could be difficult to beat in this after his second in the G1 Finale Hurdle at Chepstow six weeks ago, as he gets plenty of weight from the older horses.

Uttoxeter’s feature is a high-class Mares Chase, with added significance now that the Festival plays host to a similar contest for the first time this year, while Navan also has some excellent contests, headlined by a pair of Grade 2s.

The Boyne Hurdle may see the eagerly-anticipated return to action from dual Grand National hero Tiger Roll, who landed this contest two years ago, but will also feature horses with designs on the Stayers’ Hurdle come Cheltenham.

The Ten Up Novice Chase features staying novice chasers, who could end up in the Festival Novices Chase, or the stamina-sapping National Hunt Chase. Plenty of eyes will be on the Gordon Elliott pair, Troytown winner Coko Beach and recent G3 runner-up Escaria Ten, who has plenty of options in the spring.