The long-awaited return of Benn vs Eubank is nearly upon us. After their fathers captivated a nation in the 1990s, Conor Benn and Chris Eubank Jr now aim to finish what they started. This hotly-anticipated catchweight clash has many moving parts. Here’s four talking points ahead of the big O2 Arena headliner.

Conor And Chris Jr Are Not Their Fathers

This is obvious but bears repeating. The 21 rounds of eye-watering violence that Nigel and Chris Sr shared in the 90s is unlikely to be repeated by anyone in a UK ring, never mind their sons. There is a reason Benn-Eubank is still talked about as the defining British boxing rivalry three decades on.

Fans going into this bout expecting the junior members of the Benn and Eubank families to pick up where their illustrious fathers left off are in for a shock. Despite attempts at engineered animosity, this bout lacks the genuine enmity and spite of those original encounters.

Neither man can yet claim to have reached the heights of their parents. Nigel won his first world title aged 26, while his son Conor is still viewed as a young prospect at the same age. Meanwhile, Eubank Sr retired as a two-weight world champion at the age of 32, a year younger than his offspring is currently.

This may seem like an evisceration of this fight but it’s not supposed to. It is merely an illustration of the fact Nigel and Chris Sr were truly special athletes and it is not fair to expect their sons to emulate them.

Catchweight If You Can

The weight issue has defined the build-up to this fight. Eubank is coming down from middleweight with Benn moving up two weight divisions from welterweight to make 157lbs. It is the sort of bizarre situation that underlines the fact this fight would not be taking place were it not for the surnames of those involved. Both are putting their necks on the line, at their lowest-ever and highest-ever weights respectively, to make this one happen.

It is a state of affairs that greatly concerns Eubank Sr. He has campaigned heavily to get the fight called off, worrying about his son’s health. When that didn’t work, the former world champion asked fans to boycott the event. Eubank Jr has scaled as high as 168lbs in the past, so his worries are not completely unfounded. But given Benn usually weighs in at 147lbs, while Eubank Jr has fought at 160lbs in recent years, you could argue the former is taking the bigger risk. 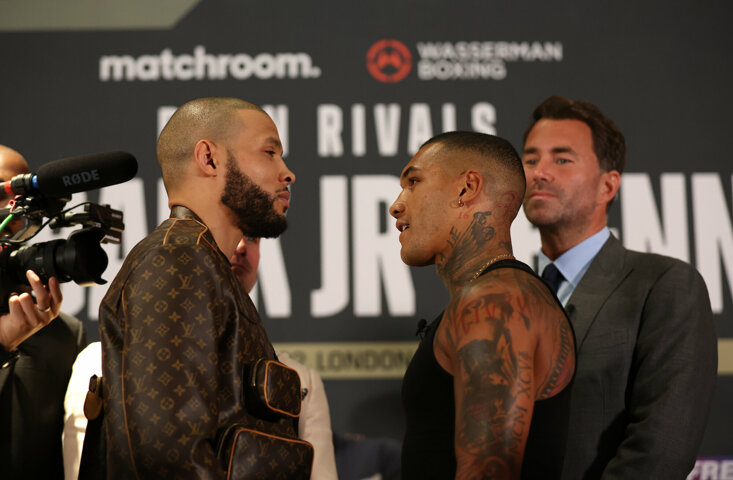 Benn Steps Up In Class

‘The Destroyer’ has earned some criticism recently for feasting on veterans rather than taking on more challenging fights. While his knockout wins over Chris Algieri and Chris van Heerden look good on a highlight reel, it is debatable how much merit there was in those wins. Algieri was a world champion eight years ago and is now 38. 35-year-old Van Heerden was a solid if unspectacular contender in his day but has been operating far below world class for a number of years.

Eubank Jr represents a far fresher opponent. ‘Next Gen’ still has designs on becoming a world champion and his size and strength will pose problems. Benn walks into a fight as an underdog for the first time ever. Has he listened to the criticism after feasting on yesterday’s men? Or was the pull of putting Benn vs Eubank on a marquee again just too much to resist? Either way, there’s no getting away from this being his toughest fight to date.

Eubank Jr Gambles With His Future

While there has been a lot of talk about the risk Benn is taking in moving up two weightclasses, outside of his own father there has been little talk of what Eubank Jr is wagering here. The heavily-favoured fighter, most expect his size and skills to be too much for the smaller Benn. Eubank Jr has touched upon it himself. He will get very little credit for beating Benn, with the “welterweight” tag sure to get thrown around in the aftermath.

While Eubank Jr has very little to gain, reputationally rather than financially, he does have everything to lose. A defeat to Benn would conclusively stamp out any talk of a world title fight for him. A stoppage defeat might well stop his career in its tracks. Eubank Jr says he will call it a day if Benn beats him full stop, but an exciting or close fight would surely necessitate a rematch. After all, like so much of this promotion, it is what their dads did.

x
Suggested Searches:
The Sportsman
Manchester United
Liverpool
Manchester City
Premier League
More
boxing
Tyson Fury On Retirement: I’m Not Built For A Normal Life
Tyson Fury returns to the ring this weekend when he puts his WBC heavyweight world title on the line [ ... ]
boxing
Mike Tyson, Floyd Patterson And Boxing's Youngest Heavyweight...
On this day in 1956, Floyd Patterson stopped the great Archie Moore in five rounds to become the heavyweight [ ... ]
boxing
Everything You Need To Know About Estrada Vs 'Chocolatito' III
Not all trilogies are created equal. But a rivalry poised at one win apiece, with each previous meeting [ ... ]
boxing
On This Day In 2015: Tyson Fury Ends The Wladimir Klitschko...
Tyson Fury walks into Tottenham Hotspur Stadium this Saturday as a proven commodity. As he makes his [ ... ]
boxing
What Does Dillian Whyte Have Left? Controversial Win Leaves...
Whatever you thought of the decision, something wasn’t quite right about Dillian Whyte’s [ ... ]
boxing
Tyson Fury vs Derek Chisora III: Everything You Need To Know...
Tyson Fury puts his WBC heavyweight title on the line this weekend when he meets Derek Chisora in the [ ... ]
boxing
Gorman Vs Wardley Is A Throwback Fight Worthy Of The British...
On Saturday night, Fabio Wardley and Nathan Gorman will honour one of the great British boxing traditions. [ ... ]
boxing
Five Blows From The Body Snatcher: Dillian Whyte's Greatest...
Dillian Whyte will be looking to bounce back to winning ways this weekend when he takes on undefeated [ ... ]
boxing
Carl Froch Vs George Groves And Boxing's Great British Grudge...
Nine years ago today, Carl Froch and George Groves collided at the Manchester Arena, waging the first [ ... ]
boxing
Dalton Smith: 'Get A Couple Of Million And I'll Smack A YouTuber!'
Dalton Smith is a star on the rise. The Sheffield super lightweight has just made the first defence [ ... ]
boxing
Zach Parker Vs John Ryder: Everything You Need To Know
The WBO interim super-middleweight title is on the line at the O2 Arena this weekend in a fascinating [ ... ]
boxing
Dillian Whyte Vs Jermaine Franklin: Everything You Need To Know...
Heavyweight contender Dillian Whyte will be looking to bounce back to winning ways this weekend when [ ... ]
boxing
Gervonta 'Tank' Davis And Ryan Garcia Agree To Mouthwatering...
WBA ‘regular’ lightweight champion Gervonta Davis has agreed a fight with unbeaten contender [ ... ]
boxing
The Weekend Boxing Preview: European Titles, Unbeaten Superstars...
After a star-studded weekend where old stagers Ricky Hatton and Floyd Mayweather took part in exhibitions, [ ... ]
boxing
Martin Scorsese At 80: Celebrating Raging Bull, The Iconic 'Anti-Rocky'
“And though I'm no Olivier, if he fought Sugar Ray he would say that the thing ain't the [ ... ]
boxing
Why Dmitry Bivol Should Make 'Canelo' Come Back To 175 Pounds...
Saul ‘Canelo’ Alvarez has targeted a May return to the ring, after having surgery on his [ ... ]
boxing
Fury-Wilder 4 And Usyk-Hrgovic: The Heavyweight Fights Nobody...
Ask any boxing fan which heavyweight fight they would cherish above all others and you’d get the [ ... ]
boxing
The Panel: Should Women's Boxing Move To Three-Minute Rounds?
Welcome to The Panel, where we speak to a group of star names from across the fight game about the big [ ... ]
boxing
A Tale Of Two Exhibitions: Ricky Hatton And Floyd Mayweather...
On 8th December 2007, Floyd Mayweather defeated Ricky Hatton in Las Vegas, with the WBC and The Ring [ ... ]
boxing
Tommy Fury vs Paul Bamba Cancelled: Is Fury Unprofessional,...
Tommy Fury’s stock has never been lower. This weekend, when due to fight Paul Bamba, he weighed [ ... ]
boxing
Redemption Day: Natasha Jonas Clinches The Treble Against Marie-Eve...
A year ago, Natasha Jonas’ two most recent fights were a pair of failed attempts to win world [ ... ]
boxing
Chasing Gold: Conner Tudsbury Determined To Become A Mancunian...
There was something of a media circus the day Moss Side Fire Station Boxing Club opened its doors in [ ... ]
boxing
Haney-Lomachenko, Stevenson-Cruz And More Ordered At WBC Convention
The World Boxing Council hosted their 60th annual convention, in which they laid out plans and policy [ ... ]
boxing
'You Want Homer To Fight Tatum?!': 26 Years Of 'The Homer They...
It was a heavyweight title fight like no other. Watched by 9.7 million viewers on its initial airing [ ... ]
boxing
Back From The Brink: Natasha Jonas Has Gone From Nearly Girl...
A year ago, Natasha Jonas had failed to win her last two bouts. The decorated amateur had seemed nailed [ ... ]
boxing
This Is Hitman Heritage: The Very Best Of Ricky 'The Hitman'...
Ricky Hatton returns to the ring this Saturday in an exhibition bout against legendary three-weight [ ... ]
boxing
Ricky Hatton vs Marco Antonio Barrera: Everything You Need To...
British boxing legend Ricky Hatton returns to the ring this weekend for the first time in nearly a decade [ ... ]
boxing
Ricky Hatton On Fighting Barrera, Hitting Campbell With Body...
British boxing legend Ricky Hatton returns to the ring this weekend for the first time in a decade when [ ... ]
boxing
Sunny Edwards Vs Felix Alvarado: Everything You Need To Know...
Flyweight world champion Sunny Edwards defends his IBF title on Friday in Sheffield when he collides [ ... ]
boxing
Logan Paul's WWE Career Is The Perfect Antidote To Jake's Boxing...
Logan Paul woke up on Sunday morning with a torn meniscus, torn MCL and a potentially torn ACL. The [ ... ]