Real Madrid had five men in defence and this was the 23rd different backline Zinedine Zidane had used so far this campaign. However, the Spanish giants could have had 50 men at the back and they still would have struggled to contain Christian Pulisic for Chelsea’s opening goal as the Blues’ netted a vital away strike as they drew 1-1 in Tuesday night’s Champions League semi-final first leg.

When you get to the last four of Europe’s premier competition, you have to be supremely special and the American showed his supreme skill to get the better of Los Blancos. It was on 14 minutes at the quaint Estadio Alfredo Di Stefano that Pulisic struck.

Antonio Rudiger punted an excellent long ball forward which Pulisic plucked from the air. The young forward then kept possession close as he weaved it back towards goal. Thibaut Courtois was baring down but it didn’t faze him as he glided around and past the former Blues keeper with ease before rifling it past the helpless centre-backs stood on the six-yard box and into the back of the net. The composure. 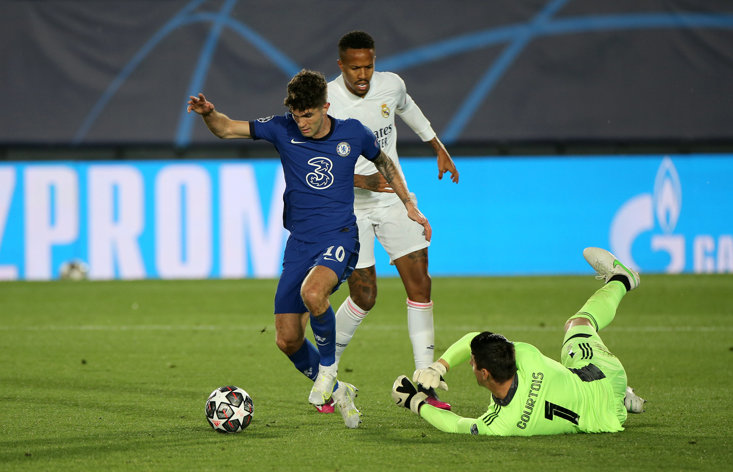 Thomas Tuchel’s men had their away goal and this is a team fully together right now. Having enjoyed a stellar run under the German, they celebrated on the touchline as a unit, this was a big goal; the exact kind of goal former Stamford Bridge favourtie Eden Hazard, sat on the Real bench, scored plenty of times for Chelsea. They have other wingers of the extraordinary now.

However, the lead didn’t last long and Zidane’s team were level on the half hour mark. Karim Benzema struck his 28th goal of the season in fine style. The hosts worked a corner out to Marcelo via two passes and the Brazilian swung a ball to the back post. This had been worked on. It was headed back into the area, took another flick and then landed at Benzema and time stood still. The Frenchman teed it up and volleyed it home with a rocket of venom from his right boot.

Timo Werner wasted a stunning chance to double Chelsea’s tally after finding himself unmarked but his effort was stopped by Courtois’ boot. It has been a trying campaign for the German and when the confidence isn’t at the max, such opportunities can be squandered.

In the second half the visitors kept the ball well and at times, Real were camped in their own half with two banks of players, wary of the disastrous consequences another away goal can be when tasked with trying to breach the Chelsea defence in the return leg. They had to be tight and, as the right battered the pitch, blocked Mason Mount’s speculative drive from the edge of the area with relative ease. Later, Real were lucky not to concede a penalty when Ben Chilwell appeared to be shoved by Dani Carvajal in the box.

N'Golo Kante was a big presence for Chelsea, covering every blade of grass as he so often does to hamper Luka Modric, Toni Kroos and Casemiro and he upset their rhythm. This was a game that was poised, with both clubs knowing that they had to keep a tight grip on the tie at the halfway stage.

Hazard came on with 25 minutes remaining and the Blues needed no introduction. The Belgian hasn’t enjoyed the same form or consistency in the Spanish capital as he did in London and was largely anonymous in the game.

Chelsea went to Madrid and did what Liverpool couldn’t and avoided defeat, taking a vital away goal back home. This is a Blues side who are resilient and Real will be well aware of the massive task awaiting them in the second leg. Advantage Chelsea? They took an important step towards European glory and can count themselves as favourites to reach the showpiece final but there is still a job to do.