Manchester City have slumped to a third successive defeat, after losing 2-0 at home to West Ham. The loss sees Gareth Taylor’s side nine points off top after just four games, with a tricky Manchester derby to come next Saturday.

Last season’s runners-up have been beset by injuries this season, but still managed to dominate the Hammers for periods in the first half. Dagný Brynjarsdóttir scored against the run of play just before half time. West Ham saw their diligent pressing rewarded when Yui Hasegawa seized on a defensive error and added gloss with an injury time goal.

Reigning champions Chelsea continue to impress, beating Brighton & Hove Albion 3-1. A potential banana skin was avoided by Emma Hayes’ side, who had recorded their only league loss of last season in this fixture. Guro Reiten gave the hosts and early lead, before Fran Kirby found Megan Walsh with an elegant pass to double the lead.

Danielle Carter gave Brighton hope, netting just after half time. Chelsea laboured to put the game beyond doubt, always in control but unable to land the killer blow until the 80th minute. The creative Kirby notched her third assist of the day, setting up Bethany England to put a bow on a fine display.

Arsenal remain the team to beat in this year’s Women’s Super League. Jonas Eidevall’s Gunners made it four wins from four games with a staggering second-half pummeling of Aston Villa. Truthfully, they should have left after a first half in which they dominated proceedings. Their goals were worth the wait though, with a Kim Little brace and goals for Mana Iwabuchi and Lia Walti completing the rout. 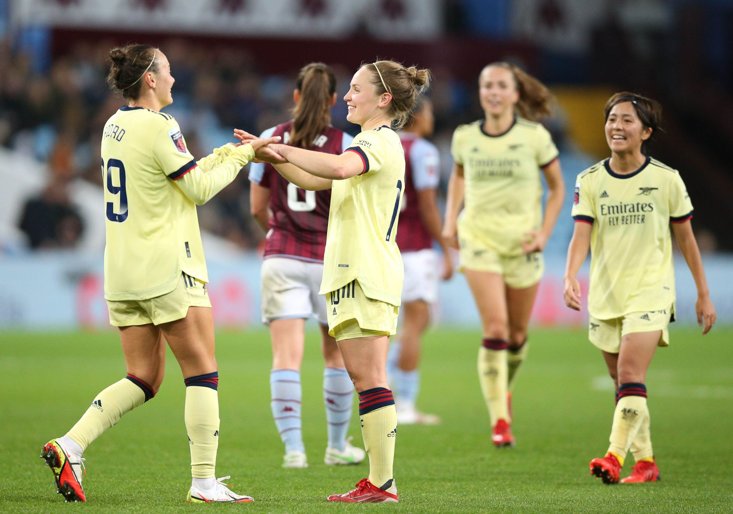 Manchester United bounced back from their 6-1 hammering at the hands of Chelsea last weekend with a win at Birmingham City. Marc Skinner’s side sit fourth in the table after victory at St Andrew’s, while Birmingham slump to 17 games without a win, their longest winless streak in the WSL. Leah Galton and Ella Toone got the goals, with defender Hannah Blundell assisting both.

Tottenham Hotspur maintained their unbeaten start to the WSL, beating Leicester City 2-0. Rehanne Skinner’s team had been humbled 5-1 by Arsenal in the FA Cup in midweek, but did well to recover here with a fine win. Rachel Williams made it two goals in two games just before half time, before Angela Addison came off the bench to add a late second.

Reading remain rooted to the bottom of the Women’s Super League, after losing 3-0 at home to Everton. Anna Anvegard put the away side in front after just two minutes, and Reading’s luck never improved. The Royals lost Deanna Cooper and captain Natasha Harding to injury before half time. Claire Emslie and Danielle Turner added further strikes to leave Reading without a point after four games of the season.