Claressa Shields crossed over to MMA and won, Billy Joe Saunders is considering retirement after his loss to Canelo and Anthony Joshua’s next fight could be heading to north London. Here are five boxing stories you might have missed this week...

The 26-year-old, competing under the Professional Fight League banner, showed her striking prowess after stopping Brittney Elkin in three rounds in New Jersey. The American was made to work for the win though, having been forced to ground for the first two rounds before delivering the stoppage.

"I feel like I am dreaming," Shields told PFL. "This is crazy."

"I never doubted myself winning a boxing match in my life. MMA, it's like it's possible I can lose this first fight.” 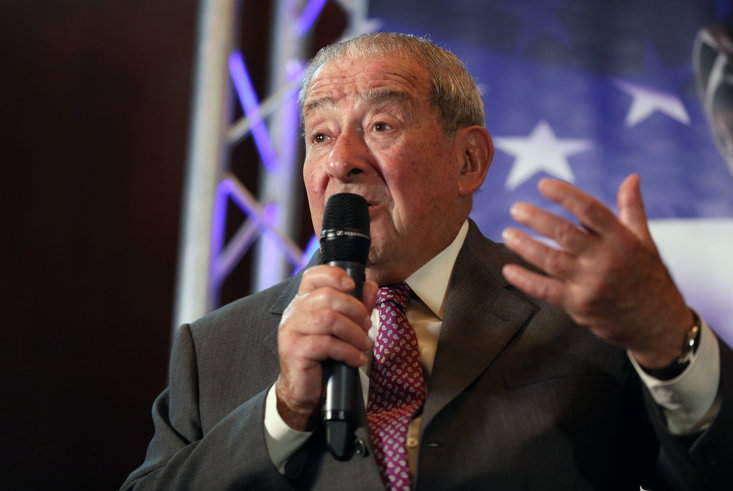 Bob Arum has hit back at fellow promoter Eddie Hearn over the collapse of Anthony Joshua and Tyson Fury’s heavyweight unification bout.

Hearn has been vocal in his belief that it was the veteran promoter’s fault after an arbitrator ruled that Fury must face Deontay Wilder for a third time before AJ. Arum, however, believes Hearn “screwed everything up.”

"Eddie has diarrhoea of the mouth. He can't stop talking and he doesn't think… Eddie should shut up and stop blaming other people. He'd be well advised to shut his mouth and look in the mirror," said the 89-year-old.

"Eddie screwed everything up. The Saudis were happy to pay a tremendous site fee. Eddie got greedy, 'Pay a bigger amount, take the TV.' It dragged on for weeks. I believe if it'd just been a site fee we'd have announced and the arbitrator would've given Wilder damages."

Billy Joe Saunders says he’s 50/50 over whether he will retire following his devastating defeat to Canelo in Texas last month.

The Mexican superstar handed the Brit his first professional defeat when his corner ended the fight due to a fractured eye socket suffered in the eighth round and Saunders says he will talk to his dad about whether he will hang up his gloves.

“At the end of the day, I’m 31 years old, if I don’t ever wanna work again, wanna sit back, wanna chill, I can do that,” Saunders told talkSPORT.

“And so it should be, I’ve put a lot of time into boxing and I’ve paid my dues. The sport’s been very, very good to me…

“I’ll have a chat with my dad because he’ll have a big say in it.

“To be fair it will be more or less down to my dad in the conversation more than me if I’m honest.

“It’s one of them where it’s 50/50. Whether I think, I will have one more or a couple more, but they’ve gotta be the right sort of fights. If he says, ‘Leave it son, don’t go back for more,’ then that’s probably what I’ll do.” 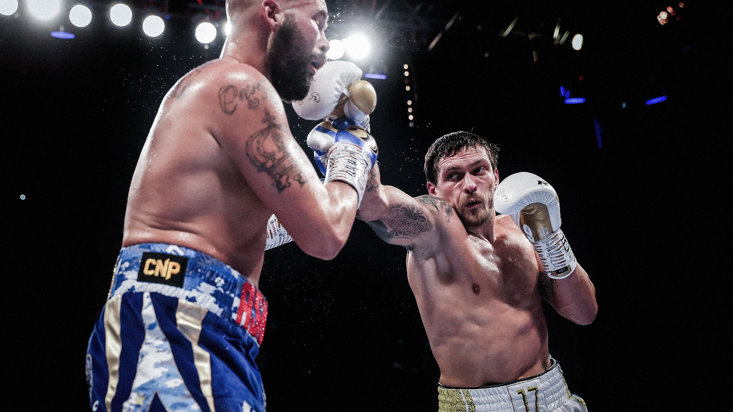 In the wake of the collapse of his fight with Tyson Fury, WBA, WBO and IBF world champion Anthony Joshua looks set to face WBO mandatory Oleksandr Usyk instead and it looks like the showdown could be heading for the Tottenham Hotspur Stadium in September.

“I can tell you that this week, that this is a more confident footing than the Joshua – Fury negotiations, because I know Alex Krassyuk very well, and I know Usyk very well,” Eddie Hearn told DAZN.

“This week that fight will be signed. We’re looking at September in London. Just finalising the details.

“It’s a great fight, a dangerous fight, it’s not the one we necessarily wanted or expected. But it’s a high level heavyweight fight. It’s a unified heavyweight champion against the undisputed cruiserweight champion, and on we go with that fight – it’s a big event.”

The fight is expected to take place on either the 18th or 25th of September, with the 25th appearing the likelier date of the two.

Team GB will be taking a stellar boxing team to the Olympics with an 11-strong squad heading to Japan in search of gold following a nine-medal success in the European Road To Tokyo qualifier in Paris this week.

"To qualify 11 boxers for the Olympic Games is a superb achievement and the boxers have really stepped-up when it matters.”

The 11 members fall just one short of the 12 that Team GB took to Rio four years ago.

x
Suggested Searches:
Manchester United
Liverpool
Manchester City
Marcus Rashford
Premier League
More
boxing
Anthony Joshua Weighs In 19lbs Heavier Than Usyk Ahead Of Heavyweight...
Anthony Joshua has weighed in at 240lbs ahead of his heavyweight showdown with Oleksandr Usyk this weekend, [ ... ]
boxing
Okolie Is The Latest In A Proud Line Of British Cruiserweight...
Anthony Joshua will not be the only British world champion stepping into the ring at the Tottenham Hotspur [ ... ]
boxing
Anthony Joshua vs Oleksandr Usyk Is Fight Of The Year, Says...
Ahead of Oleksandr Usyk’s heavyweight showdown with Anthony Joshua at the Tottenham Hotspur Stadium, [ ... ]
boxing
From Mike Tyson To Mr. Dream, How Punch-Out!! Defined Boxing...
Only 55 men truly know what it is like to face ‘Iron’ Mike Tyson. But a generation of gamers [ ... ]
boxing
Anthony Joshua Treating Oleksandr Usyk Fight Like Just Another...
Anyone expecting fireworks akin to Canelo and Caleb Plant’s presser might have been left disappointed [ ... ]
boxing
Six Of The Best: Famous Boxing Father And Son Duos
Campbell Hatton faces Sonni Martinez this weekend in his fourth professional fight. While the Manchester [ ... ]
boxing
A Usyk Win Could Derail AJ-Fury, But Bring Us An Undisputed...
When the dust settles and Anthony Joshua vs Oleksandr Usyk is in the record books, fans and media alike [ ... ]
boxing
Eubank And Watson Made History That Should Never Be Repeated
Every boxing match is a roll of the dice. Fans demand ferocity and violence. They roll the dice and [ ... ]
boxing
Next Best Thing: Why Usyk Is The Best Opponent AJ Could Have...
Anthony Joshua steps into the ring with Oleksandr Usyk on Saturday, defending his WBA, WBO and IBF world [ ... ]
boxing
Start Time? Undercard? How To Watch? Everything You Need to...
Anthony Joshua’s IBF, WBA and WBO belts will all be on the line this weekend when he takes on [ ... ]
boxing
Dillian Whyte To Fight Otto Wallin, Five Boxing Stories You...
Dillian Whyte could face a tough heavyweight test in October, Jake Paul is helping to make a women’s [ ... ]
boxing
Bridge Over The River Why?: WBC Confirms First Bridgerweight...
Boxing has a new world championship in a brand new weight class, as Oscar Rivas and Bryant Jennings [ ... ]
boxing
Crawford vs Porter: Top Welter Scrap Can Cure Boxing Of Its...
WBO welterweight champion Terence Crawford will meet former two-time belt-holder Shawn Porter on 20th [ ... ]
boxing
Tales From The Crypto: Amir Khan Fronts Bizarre Finance Influencer...
You have seen your favourite YouTubers knock out basketball players. You have seen MMA fighters destroy [ ... ]
boxing
Atrocity Exhibition: Boxing Must Stop Encouraging Fighters Like...
Evander Holyfield is no stranger to unedifying ends to a career. ‘The Real Deal’ has reached [ ... ]
boxing
Tyson Fury Shares Career Bucket List, Five Boxing Stories You...
Tyson Fury has mapped out his ideal boxing bucket list, Donald Trump is back and Billy Joe Saunders [ ... ]
boxing
Anthony Joshua's Ferocious Punching Power The Key Against Usyk,...
There’s a little over a fortnight to go until the showdown between WBA, IBF, WBO, and IBO heavyweight [ ... ]
boxing
First Line Of Defence: When The Best Brits Put Their Belts On...
Sunny Edwards was set to defend his IBF Flyweight championship against Jayson Mama on Saturday at the [ ... ]
boxing
When They Were Kings: Triller’s Old Guard Have Seen Better Days
Propped up by a mixture of celebrities, retired fighters, influencers and the odd rising boxer, Triller [ ... ]
boxing
When Wladimir Klitschko And ‘The Next Tyson’ Saved The Heavyweight...
Former WBC heavyweight champion ‘The Nigerian Nightmare’ Samuel Peter turns 41 today. Despite [ ... ]
boxing
Oscar Valdez Fighting After Positive Drugs Test Casts Boxing...
WBC super featherweight champion Oscar Valdez has tested positive for the banned substance phentermine [ ... ]
boxing
Lara Slice Puts Warrington Redemption On Ice
Josh Warrington stormed into Headingley to the strains of ‘I Predict A Riot’, but not even [ ... ]
boxing
Triumphant Taylor And Heroic Hughes Highlight Warrington vs...
There is no question that Josh Warrington drew the large and vocal crowd to Headingley, to watch him [ ... ]
boxing
Influencers Need Not Apply: Fury, Joshua and Canelo Lead Boxing’s...
Last weekend, Jake Paul “treated” us to the latest chapter in his boxing odyssey. Next Saturday, [ ... ]
boxing
Josh Warrington Admits Pressure Is On As He Seeks Revenge Against...
Josh Warrington is gearing up for a shot at revenge on Saturday night when he takes on Mauricio Lara [ ... ]
boxing
Undisputed vs Undisputed: A Future Fight Between Serrano And...
Among the YouTubers and gross mismatches on show in Cleveland, Ohio on the Jake Paul vs Tyron Woodley [ ... ]
boxing
A Night At The Circus: Paul Squeaks Past Woodley As Tommy Fury...
Jake Paul moved to 4-0 (3 KOs) last night with a split decision victory over former UFC champion Tyron [ ... ]
boxing
Angelo Dundee: Three Masterpieces From Boxing’s Greatest Trainer
Perhaps the greatest cornerman of all-time, Angelo Dundee guided the careers of sixteen world champions [ ... ]
boxing
Okolie Makes First WBO Defence On Stacked AJ/Usyk Undercard
Lawrence Okolie makes the first defence of his WBO World Cruiserweight Championship as part of a strong [ ... ]
boxing
Pacquiao Eyeing Up Ugas Rematch, Five Boxing Stories You Might...
It might not be the end of Manny Pacquiao’s legendary career just yet, YouTuber Jake Paul is comparing [ ... ]