Football
News
The team with no money claim they are going to dominate the market
Joey Mills
14:55, 06 Jan 2022

Ferran Torres is a Barcelona player. The Manchester City star has been purchased for a €55 million fee by the club with no money. A side that had to part with the totemic Lionel Messi, the greatest player of a generation and the club’s most feted legend, due to being unable to meet his wage demands. A team that asked Jordi Alba, Sergio Busquets and Gerard Pique to take pay cuts just to keep the flame lit. In summer, we heard how the very existence of Barcelona was at stake. This winter, Barcelona president Joan Laporta has declared “Everybody should get ready, as we are back as big players in the market.”

Laporta gave those comments at Torres’ unveiling, betraying the fact this was not just a footballing acquisition but a statement of intent. The bold claims that the Blaugrana remain at the top of football’s heap did not stop there. Laporta has reportedly briefed those close to him that Borussia Dortmund star Erling Haaland, one of the most sought-after talents in world football, will join in the summer. Alvaro Morata, the Atletico Madrid striker currently on loan at Juventus, is expected to be a target for this month. All the noises coming from Camp Nou suggest buying players is an immediate priority.

All this at a club that legally cannot register the player they have just bought. While the Torres deal appears to have been a simple and swift piece of business, the former Manchester City forward is not yet registered in the squad. There is no room in the wage bill for Torres, with Barcelona needing to show significant inroads towards meeting a salary cap of €98 million. Considering the club shells out around €430 million a year currently, they need to show sufficient commitment to addressing this difference to avoid further sanctions. 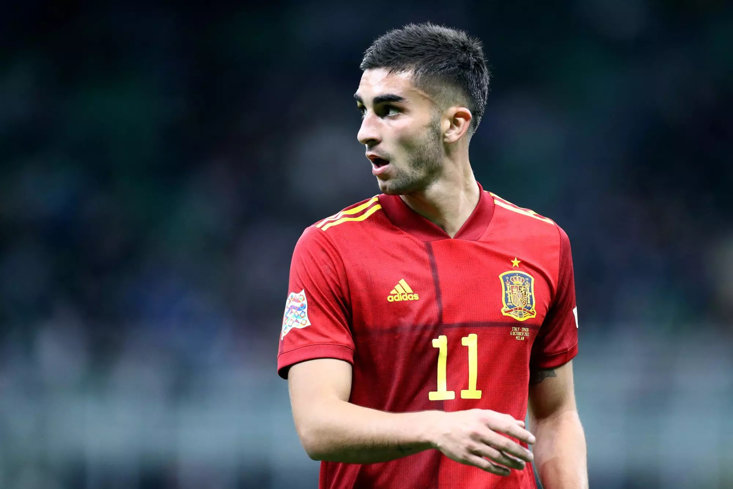 symbol of excess: barcelona are using the transfer of ferran torres to signpost a new era

Efforts are being made. The club are trying to convince Ousmane Dembele to sign a new contract, principally so they are able to spread the payments for a transfer they are still paying off the fee for. The club is also trying to find exits for a number of high-earners. The summer saw Antoine Griezmann and Miralem Pjanic loaned out to get their wages off the considerable bill, in addition to letting Messi leave. This winter, Barcelona are looking into moving on Philippe Coutinho, Martin Braithwaite, Sergi Roberto and Samuel Umtiti amongst others. With former Liverpool star Coutinho linked with a Steven Gerrard reunion at Aston Villa, this could provide the leeway to at least register their latest acquisition.

It is not just new arrivals who are being affected by the financial game of chance being played at the Catalan giants. Promising Rapid Vienna youngster Yusuf Demir joined on loan in the summer, on the condition he would be purchased for €10 million if he were to make ten first team appearances. The winger has played nine games for the club, and has been told he will not be selected again. It is a horrible way to treat an 18-year-old who has just seen a dream move blow up in his face through no fault of his own. It also makes a mockery of any talk of Barcelona being “back”, as Laporta puts it.

The Torres signing, the Morata interest and the Haaland hints are all symptoms of the same disease. Laporta’s desire for Barcelona to be feared once again. For clubs to worry about facing them on the pitch, and at the negotiating table. But with the team on such precarious financial footing, Barcelona’s rivals will soon realise the emperor has no clothes. The team is beholden to sales just to survive the pinch of Financial Fair Play, never mind to fund star attractions juggling the ball in an empty Camp Nou. Don’t let Joan Laporta tell you that the sun is out, there are still clouds over Barcelona.