Goran Ivanisevic is closer to Novak Djokovic than most as his coach – and the 2001 Wimbledon champion paid a heartfelt tribute to his charge for claiming a magnificent seventh title at SW19 given the lingering effects of January’s Australia deportation fiasco on the player.

The highly successful Balkan double act has been running for over three years now, and Croatia’s greatest tennis icon is a constant presence both on the practice court and in the Serbian player’s box on matchdays. And he celebrated as hard as anyone when the 35-year-old clinched his 21st grand slam success, and then milked the acclaim of the Centre Court crowd.

By Djokovic’s own admission the very public chaos that saw him first given an exemption and a visa to enter Australia and play in the Melbourne slam followed by a legal drama before being told to leave was embarrassing and left scars. Of course his own decision not to have the Covid vaccine was largely responsible, but the messy fallout saw no one emerge with any credit.

So Djokovic’s four-set win over Nick Kyrgios on his wedding anniversary was especially timely and welcome for the player and his family and support team – with, as it stands, his vaccination status set to rule him out of entry to America for the US Open later this year.

Ivanisevic, now 50, said: “It's very emotional. If I can say it was a sh*t year, a tough year, especially for him - but also for us that were close to him.

“Being there in Australia, everything after, it took him a while to keep going and find his form. Then losing to Rafa, I mean, you can lose to Rafa any time in Paris. But for me he was a favourite here at Wimbledon. Before the tournament he really played some unbelievable tennis. But you still need to win the tournament, so it was not easy. It is grand slam No21, and he really deserves it.

“You know, when something happens to the person - okay, we talk about Novak - but the thing that happen to him in Australia. Some people, after that they never come back to tennis or to anything. 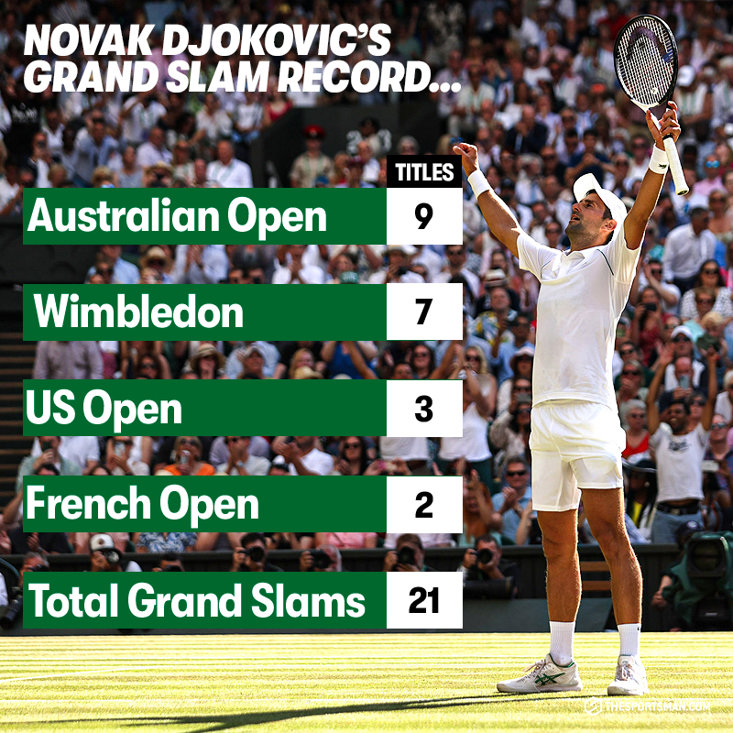 “This was a huge thing what happened to him. We all expected from him after couple of weeks, ‘Okay, forget about Australia, let's go back and practice’. But it didn’t happen like this. It took a long time. Monte-Carlo, Belgrade, then he started to play better, Madrid, Rome. He even played well in Paris, but Rafa was the better player that night.

“For some people, they don't recover, they will never play tennis again. It was really a big shock. It was a shock for me, and I was there in Australia but I was free. Imagine how it was for him.

“It is unbelievable how he recovered and how he got through that. It's really for me heroic because it was not easy to digest all the things and come back to play tennis. Then you're thinking, ‘Why you have to play tennis’? Three, four weeks before the French Open, he was not allowed to play French Open, and you cannot make a schedule because one country changes their rules.

“Now you can enter, now you cannot enter - we cannot make any schedule. We practise but we don't know for what we are practising for, so it was not easy. Now it's better. You know where you can go, where you cannot go. It's easier.

“I never doubted he would get back to this level. People like him, you don't doubt. He's a great champion. It just took him the exact time that he needed to recover and to digest all the things what happened to him. He just needed to find peace. And this is the result - this trophy, this joy on the Centre Court. It's so beautiful.

“For me now, there is one movie back home, 'Long, Hot Summer'. This is going to be for me a long, hot summer vacation. I'm going to have vacation from now, I don't know till when.

“I go back home. It's a nice summer…beautiful. If he goes to the United States, it's going to be beautiful. If he don't go to the States, what can we do? It's another tournaments. We see, I don't know. Maybe [President] Biden will change his mind.

“A lot of crazy things happening in the world. It's come every day something is changing, something new. We see what's going to happen. Still we have, what, one and a half months. Anything can happen or not happen.”