Tennis
News
Angelique Kerber will provide a tough test for the 17-year-old but the American will be full of confidence
Conor Keane
06:55, 05 Jul 2021

As we enter the second week of Wimbledon and into the round of 16, a lot of eyes will be on young Coco Gauff who has performed remarkably well so far at the All England Club.

The 17-year-old still amazes tennis supporters with her ability and maturity at such a young age and it has really benefited her performances so far on the grass courts. She has already proven she is a force to be reckoned with on the court this season by reaching the quarter-finals of the French Open earlier in the year.

Gauff is a fantastic young talent who has already brought so much excitement and skill to the sport and she has been treating the Wimbledon spectators in her matches so far.

The world number 23 got off to a fantastic start in the first round on Court 2 as she beat Britain’s Francesca Jones in straight sets, 5-7 4-6. The American scored an impressive nine aces against Jones, highlighting ability beyond her years.

She then backed it up in her second and third round matches Elena Vesnina and Kaja Juvan, respectively. Once again Gauff brushed aside her opponents in straight sets again, with the youngster hitting 14 aces across the two matches. With her convincing victory over Juvan, the teenager has reached the same feat of two years ago where she also reached the fourth round at Wimbledon. 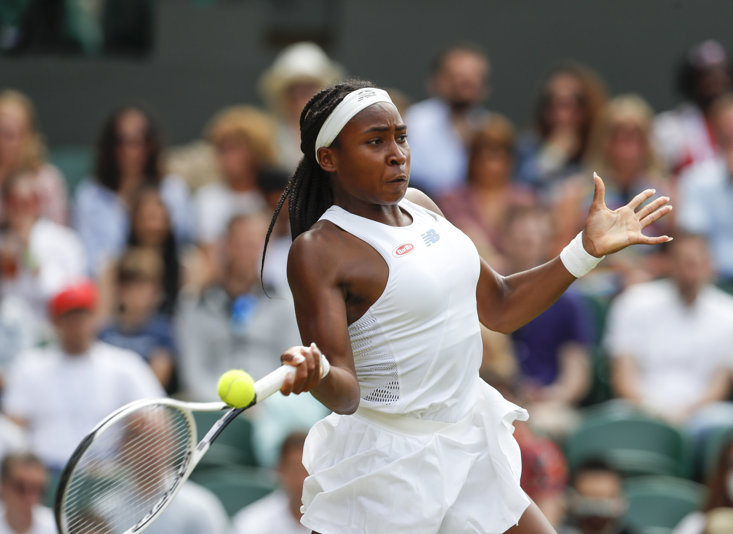 Slovenian Juvan could not handle the tenacity and quality the youngster possesses, as Gauff dazzled on Centre Court, winning the match 6-3 6-3 against the world number 102 at the scene of her breakthrough two years ago against Venus Williams.

Regardless of rankings, the 20th seed has thoroughly deserved her place in the fourth round with some excellent tennis and three convincing victories. She will now face her toughest challenge on the grass court when she faces former Wimbledon women’s singles champion Angelique Kerber.

The 2018 Wimbledon women’s singles champion will provide a tough test for young Gauff, but she will not be fazed by her opponent or the gravity of the tie and will be able to take to this landmark match in her career as if it were any other.

The experience she will have gained with her impressive three victories ahead of her clash with Kerber will only have further prepared her for this competitive fixture and she will be full of confidence as the pair take to Centre Court this afternoon.

With the sad loss of 23-time Grand Slam winner Serena Williams to injury in the first round, Gauff will be flying the American flag high and will have all the support of her compatriots back home.