Football
News
It was a night to remember for the competition's lowest ranked team
Jack Porter
15:01, 25 Sep 2019

Colchester United’s Carabao Cup charge continues. Not content with seeing off Premier League outfit Crystal Palace in the previous round, they added the scalp of Tottenham Hotspur on Tuesday with a dramatic penalty shoot-out win after a goalless stalemate.

Seventy places and around £400million of talent less well off, League Two Colchester, the lowest-ranked team left in the competition, wrestled ownership of the sports headlines once again and left Mauricio Pochettino’s Spurs heading back to the capital with plenty to ponder as they look to get their season going.

Colchester assistant manager Steve Ball explained to The Sportsman the significance of the result in once again besting Premier League opposition and moving to within 90 minutes of the quarter-finals of a major cup competition:

“Everybody involved at the club for a number of years must consider that one of the best nights in the club’s recent history. I thought the Crystal Palace game was a brilliant evening but with all respect to Palace, this betters it.

“Beating Tottenham is just a huge achievement. Spurs having to turn to Christian Eriksen, Heung-min Son and Erik Lamela towards the end of the game shows how nervous they were about not getting a result.

“We had the beauty of it going to a shoot-out against Palace in the last round and four out of our five spot-kick takers in that match were on the field against Spurs, so we could have the exact four takers in the exact same order. The takers had already been picked and they themselves were fully focused on the job.”

Colchester midfielder and youth product Tom Lapslie missed the last round versus Palace, but took the glory at his home ground with the decisive penalty after Lucas Moura’s effort rattled the cross-bar, sending the Community Stadium into rapture with a historic winner for John McGreal’s side.

“It’s quite special when that goal goes in,” Lapslie told The Sportsman, “I stepped up for it, was quite calm leading up to taking it and simply ignored the outcomes. It was just about making sure I hit the target.

“The scenes and jubilation after that were pretty mad and it’s only really then when you realise what’s happened.” 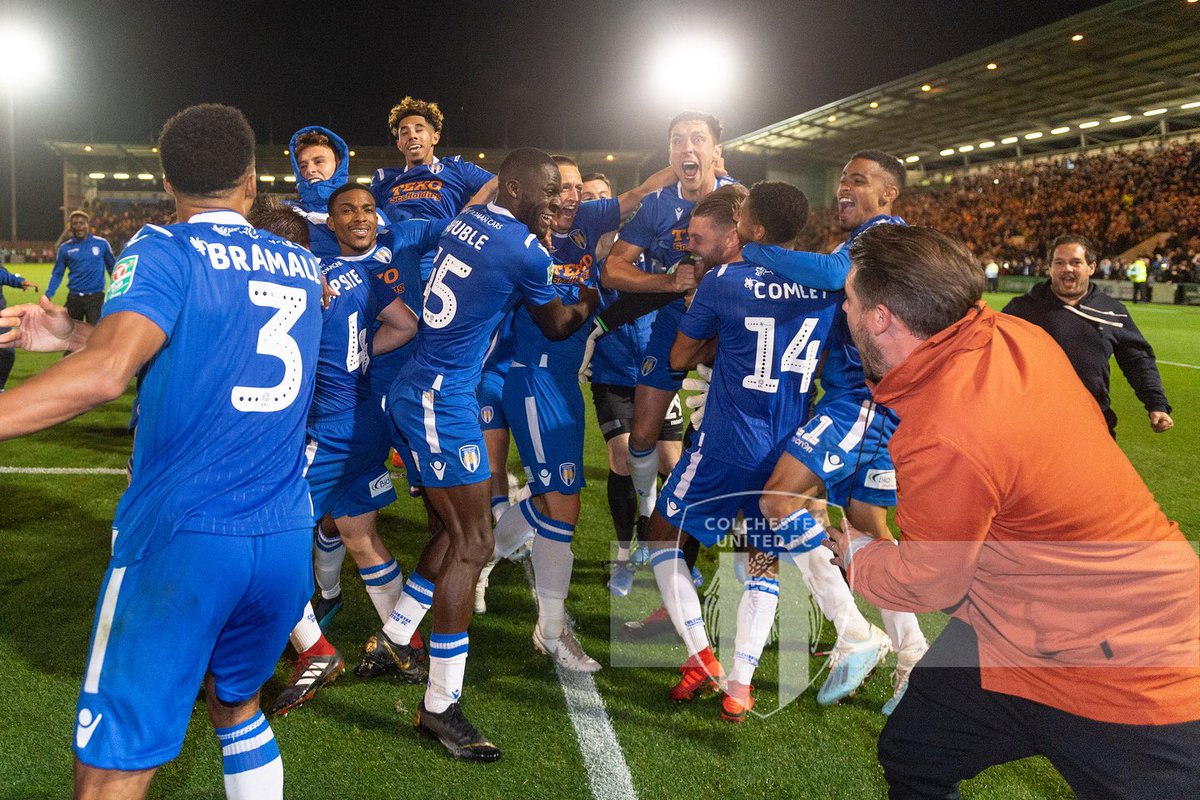 The narrative had switched dramatically throughout the course of the shoot-out. Eriksen - one of the best dead-ball specialists to have graced the EPL - had Spurs’ first effort saved by U’s keeper Dean Gerken, who had earlier denied Lucas Moura’s strong free-kick during the match.

Whilst Dele Alli and Lamela subsequently tucked the ball away for the visitors, the outcome now swayed towards the home side. However, Jevani Brown’s tame ‘Panenka’ effort for Colchester’s third allowed Spurs keeper Paulo Gazzaniga to dive, then retrieve himself from the ground to punch away. Colchester may well have began to think their luck had run out.

“These things happen,” said Lapslie, “You can’t score all of them.”

Ball also sympathises with Brown: “We always say to the players ‘Have conviction in the way you take a penalty’. In Jevani’s defence he had it in mind to take the penalty in the way he did.

“Did I want him to do it? No. But ultimately it's a credit to the way we bounced back.”

Moura’s miss from 12 yards led Lapslie to take the fifth, which the midfielder - part of Colchester United from the age of 16 - lashed into the bottom left-hand corner to seal his side’s best run in the competition since the 1974/75 season.

The result carries an extra bit of significance for the assistant gaffer thanks to his links to Arsenal. That time as part of the Gunners’ set-up from the age of nine to 20, through the youth team, the reserves, and to a professional contract, mean he knows plenty of people who will share joy in Colchester’s triumph.

“As an Arsenal fan as a kid, I never had any affection towards Spurs. The initial draw for me personally was brilliant, and after the game I got many calls from many Arsenal friends to thank me for that result.”

While the draw, of course, brings fervent excitement with a Premier League match-up a likelihood, feet on the ground is now the name of the game for the Essex outfit. Taking the individual glory isn’t on Lapslie’s agenda, for example, despite it being his breakthrough moment.

“Defensively, our shape was excellent. We knew we wouldn’t have a lot of the ball,” says the 23-year-old. “Coming into the game we knew it would be about how well we defended to determine how well the evening would go. It’s all credit to the boys, who put their bodies on the line, ran their socks off and will have a few sore legs this morning.”

And what’s next for this Goliath-slaying side?

“Going to any of the Premier League’s side’s stadia would be a great honour,” says self-confessed Liverpool fan Lapslie.

“Another top team - a Manchester United, an Arsenal, a Liverpool - would, of course, be amazing,” agrees Ball.

“Whatever happens from now on doesn’t discount from the fact that this run has been memorable for this club.

“Obviously, after the game, there was total elation from the players. But we enjoy it today, and tomorrow it’s back to thinking about Macclesfield away on Saturday.”

Sky Sports Football
@SkyFootball
League Two @ColU_Official heaped more misery on @SpursOfficial and Mauricio Pochettino by dumping them out of the Carabao Cup 4-3 on penalties.
Lucas Moura and Christian Eriksen miss in shootout for Tottenham:
33
221
More
football
Business As Usual: A Beginners Guide To The Belarus Premier...
If you’re going out of your mind without your football fix, well we’re sorry you just haven’t [ ... ]
football
Why June 30 Could Be D-Day For The Fate Of Premier League Season
England captain Harry Kane has added his voice to the growing calls for the Premier League season to [ ... ]
football
You Heard It Here First - Brescia's Sandro Tonali Is Italy's...
Since winning the World Cup in 2006, it has been turbulent time on the international stage for Italy. [ ... ]
football
A Reunion With Ancelotti Could Resurrect Rodriguez's Stuttering...
No club chews up and spits out world class players quite like Real Madrid. Yet, their sense of entitlement, [ ... ]
football
'Quickly Kevin' Is The 90s Football Nostalgia Podcast To Beat...
While the majority of sports podcasts scramble to fill the minutes within the disruption of the [ ... ]
football
Where Did It All Go Wrong For Phil Neville And The Lionesses?
Winning, Phil Neville recently said at the SheBelieves Cup, is what would bring England’s women [ ... ]
football
''Drop A Few Hand Grenades'' Keegan's Advice To Scholesy The...
A packed out Wembley roared like one of those indomitable Three Lions to greet England’s new messiah. [ ... ]
football
Rise Of The Couch Coach: Coronavirus Causes 119% Surge In Football...
Thousands of us are flocking to virtual reality and gaming to help fill the void of no live football, [ ... ]
football
Review: Diego Maradona - Drop Yourself Into The Great's Chaotic...
When Diego Armando Maradona arrived at Napoli in 1984 for a world-record fee, the entire city ground [ ... ]
football
Arsenal's Tough Choice - Is Donyell Malen The Ying To Aubameyang?
Arsenal’s inability to manage the contractual situations of their biggest stars has plagued them [ ... ]
football
Robbie Fowler Is Making His Mark As A Manager With Brisbane...
The curtains came down on one of the last bastions of football standing in 2020 this week. Before the [ ... ]
football
Long Live The King: Eric Will Always Be Manchester United's...
“If ever there was one player, anywhere in the world, that was made for Manchester United, it [ ... ]
football
I Was There - The Day Football Came Home To Wembley
The closest I ever got to attending the original Wembley Stadium was on its final day in operation in [ ... ]
football
'Sunderland Til I Die' Heads To The Boardroom In Netflix's Second...
The docks have been left deserted. The wealth has dried up. Wearside has become an impoverished place [ ... ]
football
How Chief Creator Silva Became New Face Of Premier League
Football has been cast into uncertainty by the coronavirus pandemic. As it stands, nobody is sure if [ ... ]
football
Lookback:Chelsea 6-0 Arsenal When Arsene's 1000th Game Went...
It was supposed to be an occasion to celebrate for Arsene Wenger, but his 1000th game in charge of Arsenal [ ... ]
football
Ronaldo, Kane, Hazard - The Winners And Losers Of Euro 2020...
So as of this week Euro 2020 became Euro 2021. Another casualty of the global Coronavirus epidemic. [ ... ]
football
Time To Act And Move The Premier League Transfer Window
When my husband had an ear infection, I used my medical knowledge to help him. I said the best thing [ ... ]
football
Southgate Shows Strong Leadership With Rallying Cry To Fans
England head coach Gareth Southgate has sent a rousing message to national team fans as football continues [ ... ]
football
Lookback:Spurs And Chelsea's Eight Goal Thriller
In the three full seasons of Jose Mourinho’s first spell as the club’s manager, Chelsea [ ... ]
football
Take Your Pick - The Premier League Season Ending Scenarios
There are far more pressing concerns than football at the moment, as Jurgen Klopp so eloquently pointed [ ... ]
football
Premier League Clubs Must Be Less Karren And More Klopp Right...
We all know a Karen, don’t we. The proverbial I need to speak to the manager type, and while most [ ... ]
football
PSG Will Never Win Big If They Continue To Be Mentality Midgets
These days, everyone is in need of a laugh, so if you’re not aware of the @NoContextHearn account [ ... ]
football
Blackpool, Video Games And Escapes - How Footballers Have Dealt...
That date of April 3 for the Premier League to resume is looking increasingly optimistic day to day.  [ ... ]
football
Here Are The Meetings That Will Shape A Pivotal Week In The...
Coronavirus has completely destroyed the sporting calendar and led to most events being either completely [ ... ]
football
Elbow Bump! Leyton Orient Are Using FIFA 20 To Bring The Football...
With almost all football suspended for the next few weeks and with boredom already creeping in, one [ ... ]
football
Premier League Hall Of Fame Event Cancelled Due To Covid-19...
The Premier League’s first two inductions into a new Hall of Fame are set to be postponed after [ ... ]
football
Sancho’s Time At Dortmund Made Him A Pioneer - Jude Bellingham...
Results haven’t shown it, and there are fair questions surrounding his tactical approach and leadership, [ ... ]
football
Crystal Palace Left To Rue Alexander Sorloth's Untimely Revival...
Alexander Sorloth looked lost. The strapping Norwegian striker had arrived at Crystal Palace from FC [ ... ]
football
The Man Behind Downton Abbey Turns His Hand To Football And...
“Look around. You’ve given these people something to believe in. The game feeds the soul. [ ... ]
This website uses cookies
Cookies help us and our partners provide statistics. By browsing this website, you consent to the use of cookies in accordance with our Privacy Policy and Cookies Policy.
Accept & Close