Us Sports
News
On Wednesday, Kaepernick worked out with the Las Vegas Raiders, almost six years on from being exiled by the San Francisco 49ers
Kris Voakes
19:05, 26 May 2022

Google Colin Kaepernick. There he is, the ‘American activist’.

A civil rights activist first, an NFL star with six years’ experience and two playoff runs under his belt very definitely second. His chosen career path very much an afterthought. All because he knelt down when a song was playing.

Yes, it was more than just a random song, it was the national anthem. And yes, the custom is that one should stand and observe the flag at such moments. But who was standing up for Colin Kaepernick if he didn’t stand up for himself? Who was going to raise the question of the mistreatment of black people in America if a black person in America didn’t do it himself?

The backlash on Kaepernick was extraordinary at the time, and it has only got worse in many ways. While the barrage of social media bile slowed, the NFL did a cracking job of taking on the baton of hatred.

Since the end of the 2016 season in which Kaepernick made global headlines with his “disrespect of the flag”, he has played a grand total of zero games. The San Francisco 49ers released him, and the rest of the game rejected him. Nobody wanted to touch him, a quarterback with a career pass completion rate of 60% - comparable with the likes of Cam Newton and Ryan Fitzpatrick, both of whom have been able to get regular work over the last five years. 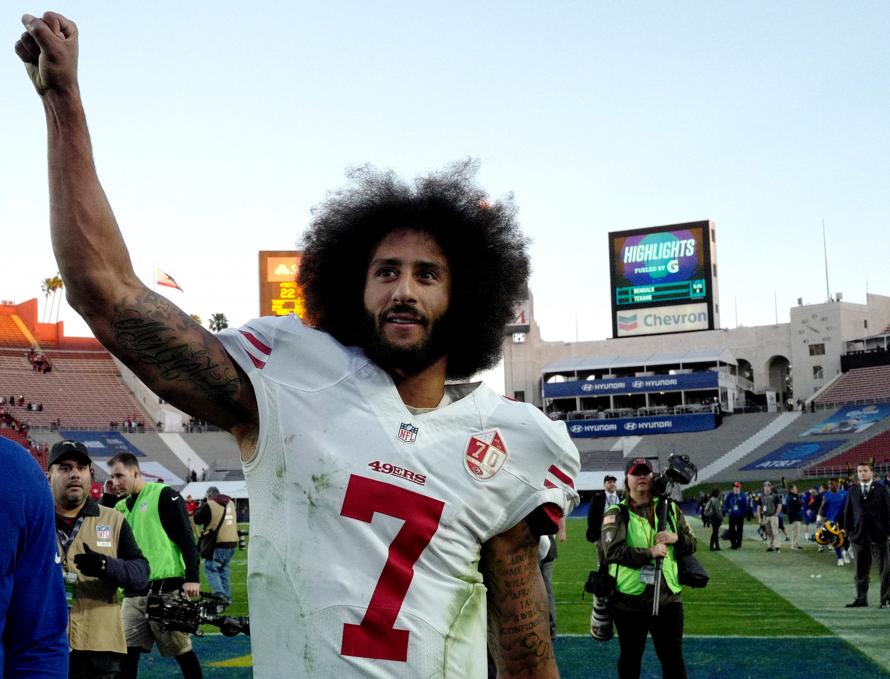 Kaepernick has, instead, been left begging for a role. In late 2017 he filed a grievance against the league, claiming that collusion was in play in him being frozen out, and 18 months later the two parties reached a confidential settlement. Similar happened with former teammate Eric Reid, who joined Colin in taking a knee back in ’16. Even after that, though, when the NFL set up a private workout for Kaepernick in Atlanta with every one of the 32 teams invited, the whole thing pretty much collapsed over misgivings regarding the agreement that it would take place behind closed doors. All the while, quarterbacks of similar standing have been signed and re-signed.

Now, finally, Kaepernick has been given a chance. On Wednesday he worked out with the Las Vegas Raiders, almost six years on from being exiled by the Niners and five years since the Seattle Seahawks met up with him but ultimately decided not to sign a man who at that time was being openly and brazenly castigated by the President of the United States.

“Wouldn’t you love to see one of these NFL owners, when somebody disrespects our flag, say: ‘Get that son of a bitch off the field right now. Out! He’s fired!’” hollered Donald Trump at a 2017 Republican rally. Yes, the same Donald Trump who has been known to publicly gyrate against the star-spangled banner, speaking about the ‘son of a bitch’ who just wanted to give a voice to poor black communities being treated horrifically by fellow citizens and authority figures alike simply because of the colour of their skin.

See, it was never about the flag. If those who labelled Kaepernick “disrespectful to the flag” actually cared about the symbol it carries, they would have lambasted Trump for some of his behaviour. They would have defended the right of an American, born in Milwaukee, Wisconsin and raised in California, to speak up for a huge proportion of his compatriots.

What it was really about was Kaepernick’s refusal to be subservient. NFL players, 58% of whom in 2021 were black or African American according to statista.com, are told week after week to be respectful of owners, authority figures and others in positions of power, the majority of whom are white.

KAEPERNICK RECEIVED VILE ABUSE AFTER TAKING A KNEE FOR THE ANTHEM

When Dallas Cowboys owner Jerry Jones suspected that some of his players might be open to taking a knee in 2017, he basically ordered the whole staff to take a knee together in a line prior to the national anthem being played and then stand to observe the flag once the song was played. It was a photo opportunity rather than a compromise. The bottom line was that he wanted no black player in a Cowboys uniform kneeling during the anthem.

But that’s the way of things. Players are ordered to stand for the anthem, face the flag and play nice, as though their communities are not systematically steamrolled into the ground by the American machine that rolls on regardless.

Kaepernick wanted people to know that he didn’t think it was ok that Philando Castile had been shot and killed by police after a random traffic stop less than two months before he first decided to kneel for the anthem. He had seen the stories of Alton Sterling, Joseph Mann, Paul O’Neal, Korryn Gaines and Jamarion Robinson over a similar time frame, and then there were the Milwaukee riots sparked by the killing of Sylville Smith by a police officer.

He was aware of what was happening to countless black Americans and wanted the world to know he was on their side. How did that deserve a five-year exile from his chosen profession?

Kaepernick has led the cause well in the years which have followed, never once backing down from his beliefs. If that makes him a civil rights activist, then so be it. But he has always wanted to be a footballer too, and at the age of 34 he might finally get a chance to do what he truly loves again.

Colin Kaepernick, the footballer, could be about to make his long-awaited comeback. And the United States of America would be all the better for it.

x
Suggested Searches:
The Sportsman
Manchester United
Liverpool
Manchester City
Premier League
More
us-sports
The Grap Wrap: AEW x NJPW Forbidden Door Special Including Cesaro's...
AEW kicked open the Forbidden Door this past Sunday, and a lot of newsworthy happenings fell out. There [ ... ]
us-sports
NBA Draft 2022: The Orlando Magic Select Paolo Banchero As First...
The Orlando Magic selected Paolo Banchero as the first pick in the 2022 NBA Draft on Thursday at the [ ... ]
us-sports
The Grap Wrap: Vince McMahon Embroiled In 'Hush Money' Scandal
It’s been a bumper week of wrestling news, with the more controversial side of the squared circle [ ... ]
us-sports
Phil Jackson: The Man Who Elevated Jordan And Bryant To The...
You hear Chicago Bulls, you think Michael Jordan. You hear Los Angeles Lakers, you think Kobe Bryant. [ ... ]
us-sports
The Grap Wrap: Bray Wyatt To Return? MJF's Flight Drama And...
Good morning grapple fans, and welcome to a new semi-regular professional wrestling column from The [ ... ]
us-sports
On This Day 20 Years Ago, The British Bulldog Davey Boy Smith...
On 18th May 2002, ‘British Bulldog’ Davey Boy Smith passed away from a heart attack at the [ ... ]
us-sports
NBA Playoffs Resume After Chaotic Exits For Champion Bucks And...
It’s been a tremendous few days in the NBA and this week’s conference finals, which start [ ... ]
us-sports
Ric Flair Returns At 73: The Nature Boy Will Walk That Aisle...
“To be the man, you gotta beat the man!” ‘Nature Boy’ Ric Flair has uttered [ ... ]
us-sports
There Are Storylines Everywhere You Look In The NFL's Week 1...
Something the NFL seem to be willing to do is make their sport a spectacle through their own power. [ ... ]
us-sports
Chuck Daly: 'Daddy Rich' Tamed Rodman, Bagged Isiah His Rings...
Entering a debate on the greatest sports sides in history should inevitably reach a particular conclusion. Avoiding [ ... ]
us-sports
'We Want RK-Bro! We Want The Usos!': No One Is Safe From Sasha...
When WWE Women’s Tag Team champions Sasha Banks and Naomi first joined WWE, the landscape was [ ... ]
us-sports
Everything You Need To Know About WWE WrestleMania Backlash
The wait ends this weekend, as WWE returns with their first Premium Live Event since WrestleMania. This [ ... ]
us-sports
The Crazy Times Of Kareem Abdul-Jabbar, The NBA All-Star Who...
This article first appeared in The Sportsman on 05/05/20 Being the number one draft pick in the NBA [ ... ]
us-sports
Blood Brothers: Randy Orton And Riddle Talk Chemistry, Growing...
The old adage dictates that opposites attract, and on the face of it that certainly seems true of RK-Bro. [ ... ]
us-sports
The NFL’s Best Trades and Free Agency Signings So Far
It’s the same every year. Almost as soon as the Vince Lombardi Trophy is awarded, attention turns [ ... ]
us-sports
Impact Wrestling's D'Lo Brown: We Didn't Open The Forbidden...
It is such an overused phrase that it has become cliched, but Impact Wrestling’s D’Lo Brown [ ... ]
us-sports
How ‘The Last Dance’ Brought Michael Jordan's Chicago Bulls...
It's now been 26 years since the Chicago Bulls ended the NBA season with a record of 72 wins and [ ... ]
us-sports
On This Day In 2018: WWE Icon Bruno Sammartino Passes Away
There have been 30 WWE Championship reigns in the last 2,803 days. In the 2,803 days between 17th May [ ... ]
us-sports
Why Jackie Robinson Day Means As Much Today As It Ever Has
Across Major League Baseball on Friday, number 42 will pitch to number 42. Number 42 will field the [ ... ]
us-sports
Frank Vogel Out: Who’s Next In The Hot Seat For The LA Lakers?
Head Coach Frank Vogel has paid the price for the Los Angeles Lakers’ poor campaign, as they failed [ ... ]
us-sports
British Invasion: WWE Announces Its First UK Stadium Show In...
WWE will host their first UK stadium show in 30 years this summer, with the American sports entertainment [ ... ]
us-sports
Giannis, Embiid Or Jokic: The Wide Open Race To NBA Most Valuable...
The race to become the NBA’s regular season MVP has never been tighter. Giannis Antetoukoumpo [ ... ]
us-sports
One Champ To Rule Them All: Lesnar Takes On Reigns On WrestleMania...
We are halfway through WrestleMania weekend, and now that you’ve finally processed what happened [ ... ]
us-sports
WWE’s Combat Sport Crossovers Have Given Us WrestleMania Moments...
This weekend, two former UFC Champions will headline WWE’s most marquee of events, WrestleMania. [ ... ]
us-sports
Return of the Rattlesnake: Stone Cold Leads WrestleMania Saturday
WrestleMania 38 is almost here, as WWE prepares to stage its biggest shows of the year. Nowadays, the [ ... ]
us-sports
The Show of Shows: The Best Match From Every Single WrestleMania
WrestleMania weekend is upon us, as WWE prepares to stage the 38th edition of the biggest event in professional [ ... ]
us-sports
The Lion and The Hyena: 25 Years On From The Most Important...
“These people are standing, can you imagine the pain that is racing through Austin’s body? [ ... ]
us-sports
Stone Cold Steve Austin Accepts Kevin Owens' WWE WrestleMania...
“Whether you want to call this ‘The KO Show’, a match, a fight, a brawl. Whatever. [ ... ]
us-sports
30 Years Since LA Lakers Retired Magic Johnson's 32, His True...
During this week, back in 1992, the LA Lakers chose to retire the number 32 jersey worn by the [ ... ]
us-sports
Michael Jordan At 59: The Man Who Changed What It Meant To Be...
In the summer of 1998, Michael Jordan won his final NBA Championship with the Bulls. Six months later, [ ... ]