Germany are a disaster. Yes, that Germany. The four-time world champions have, for the second time in succession, been eliminated from the World Cup in the group stage.

Just as their defeats to Mexico and South Korea in 2018 saw them fall at the first hurdle, their 4-2 win over Costa Rica in Al Khor on Thursday wasn’t enough to save them. The very fact they had got themselves into a situation whereby they were depending on results elsewhere underlines how far this team has fallen since their last title in 2014.

While many of the globe’s pundits were busy telling audiences that this was a Germany squad stacked with quality, the truth has been delivered out on the field. They are ageing, they are short of ideas in the forward line and they are led by a head coach in Hansi Flick who seemingly doesn’t have a clue what he’s doing.

If their failure to make it through Group E comes as a surprise to you, then you haven’t been watching. Yes, they have Manuel Neuer, and there’s Ilkay Gundogan and Joshua Kimmich patrolling the midfield, and that figure up front sure looks like Thomas Muller. But to class this team as anything other than a shadow of teams gone by is to ignore the bare facts.

But somehow Flick chose to start him against Costa Rica, and it was only when Kai Havertz and Niclas Fullkrug were brought on that Germany started to convert some of their countless chances. Fullkrug had been the saviour against Spain in game two but still didn’t get a start. Havertz had the legs to pull Los Ticos apart but was only brought on in Muller’s place after Yeltsin Tejeda had cancelled out Serge Gnabry’s opener. 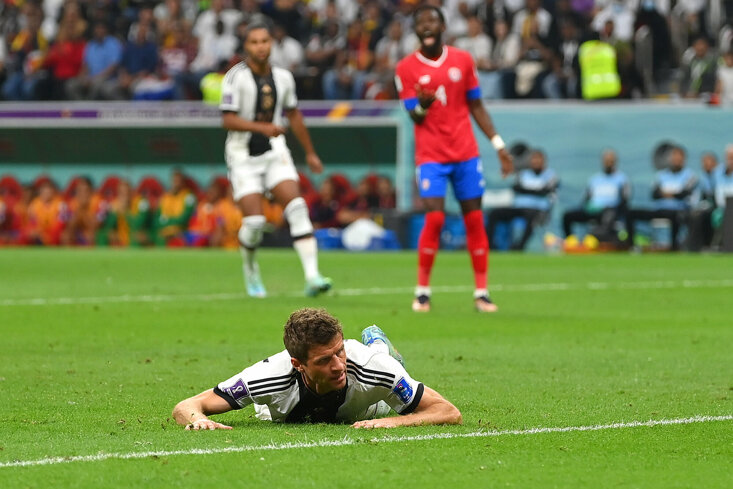 MULLER WAS OFF THE PACE IN ALL THREE GAMES

When Juan Vargas made it two it looked as though Germany would go down without even a fight but then Havertz grabbed a brace and Fullkrug put the result beyond doubt. It was not enough anyway, given Japan’s 2-1 win over Spain, but it was at least evidence of what the future can hold for Die Mannschaft.

It should have been enough for the present to have a bit more light, but Flick left it too late to make any difference. Rather than ringing the changes after succeeding Jogi Low, he hasn’t made nearly enough.

Neuer is not the same goalkeeper of the early 2010s and Gundogan – with a grand total of zero minutes of international knockout football to his name – has never been able to reproduce his club brilliance in a Germany shirt. Other names such as Kimmich, Antonio Rudiger and Gnabry come with a certain cachet but these are not Mats Hummels or Per Mertesacker, there’s no Toni Kroos or Miroslav Klose. Where were the recognised right-backs? Why was Jamal Musiala played out of position? Basically, what was Flick thinking?

Why a nation of Germany’s stature has to suffer another World Cup embarrassment for a coach to see what’s staring him in the face is anyone’s guess. But Flick, a man who many Bayern Munich fans had down as a chancer long before he left for the national team, has a lot of questions to answer after this latest proof of Germany’s dramatic decline.

BETFRED'S WORLD CUP ROUND OF 16 MARKETS*