Darts
News
The new champion is now among the World Matchplay favourites
Gary Maiden
18:55, 29 May 2021

Jonny Clayton made darts history on Friday night as he became the first man to win the Premier League Darts title from fourth spot in the Play-Offs.

The Welshman booked his place in the lucrative final with a 10-8 victory over tournament favourite Michael van Gerwen, and faced Grand Slam of Darts champion Jose de Sousa in the Marshall Arena spectacle.

His 11-5 victory over his Portuguese rival lands him prize money of £250,000, but the council plasterer insists that he will be in work on Monday morning.

Speaking with Sky Sports after his historic win, Clayton exclaimed: “Thank you to everyone who believes in me, it means a lot.

“I’m still back in work on Monday, but seriously it’s absolutely massive. I love the game, this means the absolute world to me.”

His route to the final was far from straightforward, as he needed to beat Dimitri van den Bergh in a winner-takes-all match on the final night of the group stage to confirm his place in the Play-Offs.

His reward for that 8-6 triumph over the Belgian was a semi-final clash with MVG, with few giving him much of a chance against the five-time champion.

Van Gerwen, who had secured a record-equalling eighth first-place finish in the league stage, entered the contest with a perfect Premier League semi-final record but was left stunned by ‘The Ferret’.

The Dutchman’s hopes of equalling Phil Taylor’s six Premier League titles were shattered when Clayton rallied from 7-6 down to claim four of the last five legs and wrap up a stunning 10-8 victory.

Any worries of him peaking too soon after such a famous win were quickly put to bed as  Clayton recovered from losing the first leg to open up a 6-3 lead.

He was pegged back to 7-5 but won the remaining three legs to make history in Milton Keynes, sending the 1,000 fans in attendance wild. 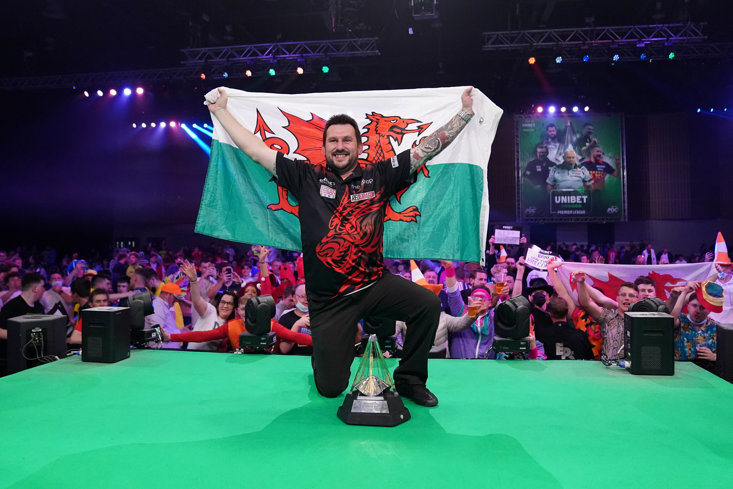 The 46-year-old also becomes the first Welshman to lift the trophy, and his burst onto the scene is a welcome one.

Ironically, Clayton wouldn’t have even featured in the Premier League had the PDC not extended the tournament to 24 players.

His exclusion would have been a crying shame after his World Cup success alongside Gerwyn Price back in November.

He was arguably the form player in darts going into the tournament, but a hit and miss campaign meant that he came close to missing out on the Play-Offs.

There is, however, a poetic justice to him becoming the first man to lift the trophy from fourth position, given that it was his first appearance in the competition.

Glen Durrant’s 2020 victory put an end to Van Gerwen’s four consecutive Premier League successes, and it is refreshing to see a new name taking on the established figures in the sport.

With the Betfred World Matchplay not far away, Clayton is now the joint-fourth favourite to add to this success.

Understandably, ‘Mighty Mike’ is installed as the favourite, with Price and Peter Wright also ahead of 12/1 shots Clayton and Van den Bergh in the betting.

A winning groove counts for a lot in darts, and with the Premier League triumph adding to his first-ever individual TV title in the Masters back in January, the Welshman will enter the Betfred event full of confidence.

The key question, of course, is whether he will hang up his plastering overalls for good after this most famous of wins? For the good of the sport, we certainly hope so.