Football
News
The new signing delivered as Villa came from two goals down to secure a point
Simon Lillicrap
19:47, 15 Jan 2022

Philippe Coutinho made an instant impact by scoring the equaliser on his debut, as Aston Villa staged an unlikely late comeback against Manchester United to secure a point from 2-0 down. When he joined from Barcelona this week, big things were expected from him, and an equaliser off the bench against United is the perfect start for him at Villa Park.

His movement was bright, his link-up with Emi Buendia was dazzling at times and in this brief cameo, he looked every inch of the player that departed for Barcelona in 2018. It still feels somewhat of a dream to see him in a claret and blue Villa shirt, but for those Villains inside the stadium, their dreams became a reality as he finished from close range.

However, this result does bring more questions about this Manchester United side, even though for 77 minutes it was a much-improved performance. Without Cristiano Ronaldo and Marcus Rashford, the side looked much more functional and hard-working, in both defence and attack, while David De Gea put in another stunning performance in between the sticks.

Having beaten Villa in their FA Cup meeting last weekend, United were handed the perfect start as they struck within the opening five minutes. A free-kick was rolled to Bruno Fernandes who hit a shot from range and Emi Martinez spilled the ball between his own legs and over the goal line. The goalkeeper claimed Edinson Cavani had blocked his view and was offside but Tyrone Mings was playing him on, and the keeper had no excuses for this error.

Mason Greenwood had a great chance to double the lead moments later, but Martinez raced out of his goal to bravely deny the forward. United were well on top, much more so than they were in their FA Cup meeting and they would eventually come to rue their missed chances after Greenwood also fired wide with his right-foot.

David De Gea was called into action by Ollie Watkins, Martinez kept out Greenwood again before Buendia’s header was stopped by the Spanish goalkeeper at the other end. The Argentine was pulling the strings for the home side as they got into the game, but they just couldn’t find the breakthrough. 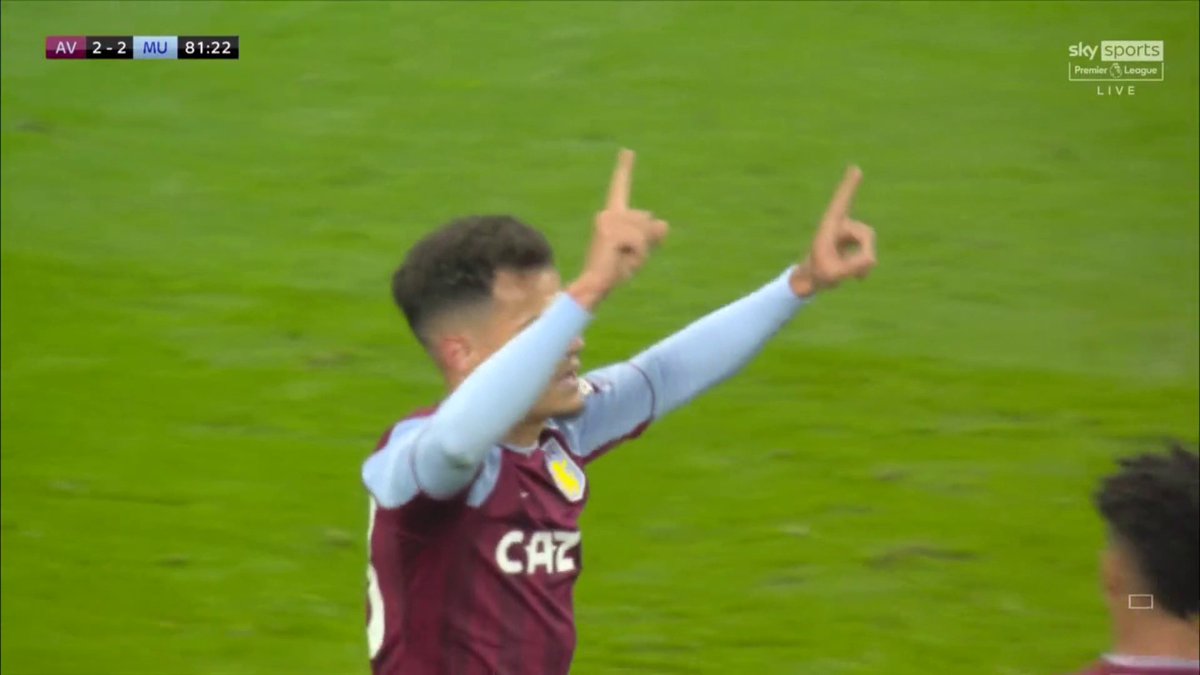 Lucas Digne was denied by De Gea after he volleyed in a left-footed effort, with the Spanish shot-stopper once again proving himself to be the best in the world on his day. In the second period, it was more of the same. Jacob Ramsey exchanged passes with Morgan Sanson before letting fly with a low effort that De Gea stopped as the veteran goalkeeper proved his worth once again to this United side.

Anthony Elanga, in from the start for Rashford fired a left-footed effort wide before Greenwood missed the target from a tight angle. This was a United outfit that were running hard, creating chances and playing unselfishly - something we have barely seen so far this campaign.

Sanson then made a crucial error that looked like it had cost his side the match. He gave the ball away to Fred and Mings was static as he set up Bruno Fernandes who thumped the ball in off the bar.

With a quarter of the game remaining, Coutinho was introduced by Steven Gerrard, and that atmosphere began to change around the ground, but it was the arrival of Carney Chukwuemeka that got Villa an all important goal back. He played a quick one-two with the Brazilian before the ball found Jacob Ramsay in the United box, and he slammed home for his first goal at Villa Park.

All of a sudden, the belief flooded the Villa veins and United began to worry. The pendulum had swung and there was only one way this story could end. Step forward Coutinho. Buendia, who was Villa’s standout player, threaded a wonderful ball through to Ramsay, who played the pass across goal to Coutinho for the easiest of finishes.

Neither side could find a winner but this points towards a brighter and more exciting future for Aston Villa. Even though the scores ended all square, the Holte End rose as one to salute their new hero at full-time. Coutinho. Turns out he can still play.