Football
News
Ronaldo is looking for a move to a club that can offer Champions League football, but who would take him?
Joey Mills
09:00, 03 Jul 2022

Cristiano Ronaldo has reportedly made clear his intention to leave Manchester United, should an “acceptable” offer be made to sign him. While rumours had emerged that new Chelsea co-owner and chairman Todd Boehly had met with the player’s representatives, this is the first credible suggestion that Ronaldo wants to leave Old Trafford.

The player still has a great deal to offer even at the age of 37. In a horrendously-misfiring United side last season he still netted 24 goals in 38 appearances across all competitions. His six strikes in seven Champions League outings proved he is still a factor in that competition. A return to the highest level of continental football is thought to be a driver behind his decision to seek a move. United could only qualify for the Europa League under interim manager Ralf Rangnick, as they slumped to their worst ever Premier League points total.

But considering the five-time Ballon d’Or winner currently pulls in a reported salary of around £500,000 a week at Old Trafford, are there any clubs willing to take the plunge? That kind of pay packet eliminates all but the very biggest sides in Europe.

David Ornstein of The Athletic has reported that Paris Saint-Germain are not interested. Even if they were, a potential union with Lionel Messi would be a political minefield that even the star-vacuum of PSG would struggle to absorb. Chelsea have seemingly shown their hand, and the money is there. But the Stamford Bridge side have just seen one mercurial forward who didn’t fit into Thomas Tuchel’s system leave in Romelu Lukaku. Would they really want to sign another player who fits that unflattering bill?

Newcastle United have more money than anyone, but it has been demonstrated so far that they do not have more money than sense. The owners appear to realise their project is a gradual one and the improvements they have made to the team have been sensible rather than extravagant. Manchester City, Ronaldo’s most intriguing option last summer, is off the table now. Even if the Portugal international was willing to ruin his reputation with the Red Devils die-hards, his potential place at the Etihad has just been taken by Erling Haaland.

The possible homes for Ronaldo are dwindling. He’s already been to the one club in Serie A that pays big money, and Juventus are unlikely to have him back. Napoli have been named in numerous reports as registering their interest, but such a move would surely be beyond them financially. Barcelona are penny-pinching and, even though the Argentine no longer calls Camp Nou home, it seems unlikely the fans who watched Messi rule the world would take to his great rival.

Real Madrid is a possibility. Still smarting from Kylian Mbappe’s about-face, a nice shot of nostalgia might appeal to the European champions. On the flipside, why upset Karim Benzema when the Frenchman is in the form of his life? Given Benzema is 34, the Bernabeu hierarchy may not want to burden themselves with two expensive forwards coming to the end of their careers. 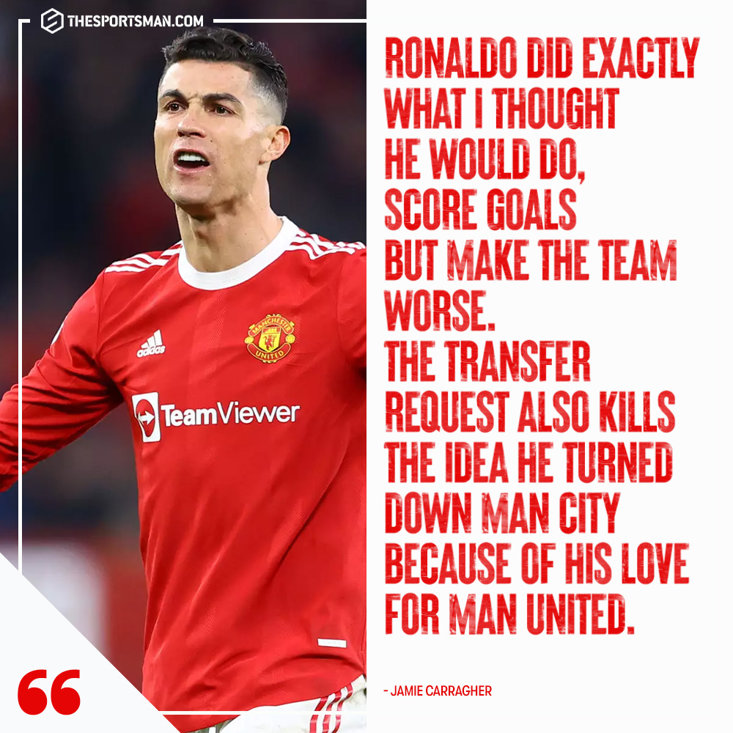 Bayern Munich have been closely linked with Ronaldo since the news of him seeking a move emerged. This move would make sense for both parties. Ronaldo would get to try and conquer another of Europe’s top leagues, while playing for a club far more accustomed to winning than the modern vintage of Manchester United. Robert Lewandowski is seeking a move to Barcelona and if he is successful in forcing an exit, Bayern could look to save face by acquiring an even bigger star. New signing Sadio Mane is an intelligent and energetic runner who would dovetail well with the formidable but more stationary Ronaldo. If ‘CR7’ does get his wish this summer, the Allianz Arena looks like the best destination for him.

Of course getting this wish is no guarantee. United are adamant that Ronaldo is their player for the remaining year of his contract, and have no intention to sell. It is easy to understand their stance. With Anthony Martial and Marcus Rashford the only players currently part of the first team squad who can operate in the number nine role, and both out-of-form, United are short-handed up top. Considering Ronaldo’s age and public declaration of unrest, he is unlikely to garner a huge fee. Thus is United are to replace him, it won’t be buy making Tottenham Hotspur an offer they can’t refuse for Harry Kane. They will have to shop further down the totem pole and are unlikely to find a striker who will net them 18 Premier League goals, the amount Ronaldo bagged last season.

This story will likely run and run, with Ronaldo and United currently poles apart in their view. Which one will blink first remains to be seen. But one thing is for sure, even as he reaches an age where most players have retired to a life of getting glared at by Roy Keane on a Sky Sports swivel-chair, Cristiano Ronaldo still knows how to create headlines.