The footy-mad person you’re buying for this Christmas has probably been kitted out since the summer, and has a room in the house (at the very least) which is plastered with memorabilia, signed prints and programmes. So what could you possibly buy them? Well, from mementos, fashion and artwork, we’ve done some digging and found loads of amazing and unique gift ideas from some of the Premier League’s big hitters. Here’s the pick of the best... 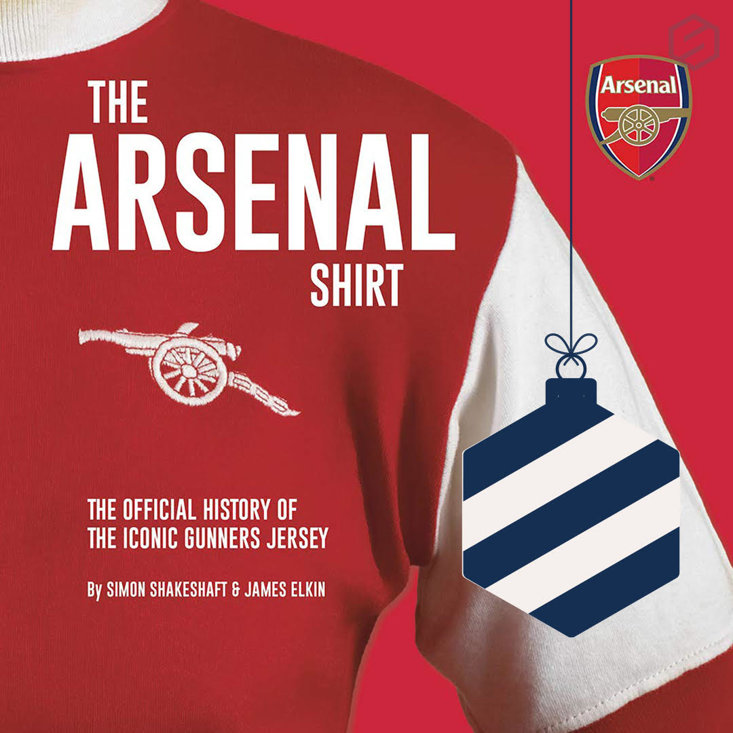 From the classic strips worn by Charlie George and Liam Brady which oozed Arsenal in red and white slick simplicity, to the JVC and Dreamcast-sponsored efforts either side of the 21st century, the Gunners have always had iconic shirts. And who can forget the 91-93 bruised banana effort which was reimagined last season?

This book profiling the best Arsenal jerseys is a must for every Gooner, with details on each kit and this latest edition boasts one-hundred new pages. Bright and vibrant, just like the north Londoners with Thierry Henry hurtling and slaloming past helpless defenders, this was nominated for Best Illustrated book at the British Sports Book Awards in 2015. Perfect for the coffee table and a peruse. 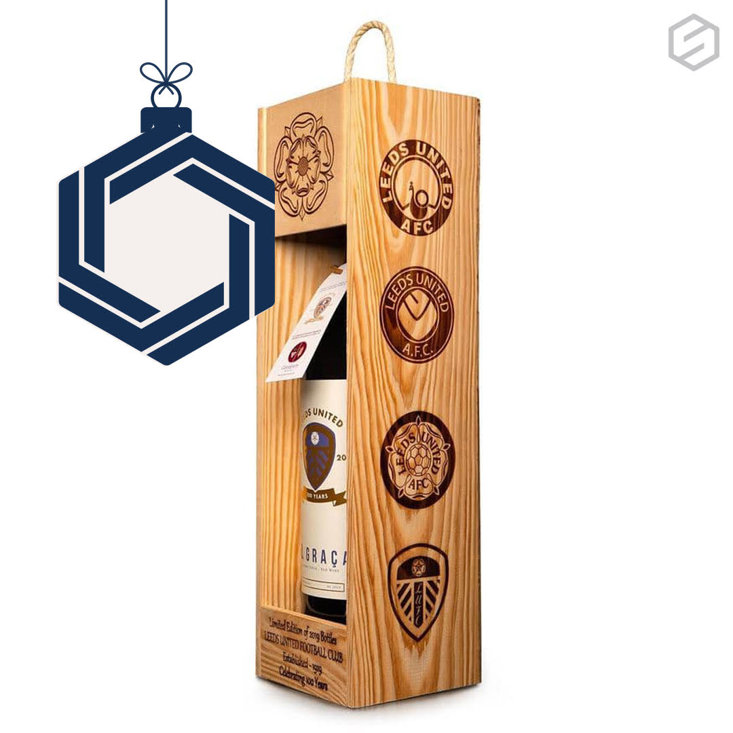 Leeds fans have much to celebrate. After returning to the big time in the summer after 16 years of exile, the Yorkshire club are scoring goals for fun under the astute management of the enigmatic Marcelo Bielsa. All of that during a Centenary season deserves a toast.

Supporters can raise a glass or two to Bielsa and the boys with this Centenary Jeroboam which contains three litres of red or white wine (we know which colour Leeds followers will prefer) and comes encased in a custom designed wooden box featuring the crests through the club’s 100-year history. A lovely keepsake from an unforgettable two seasons. 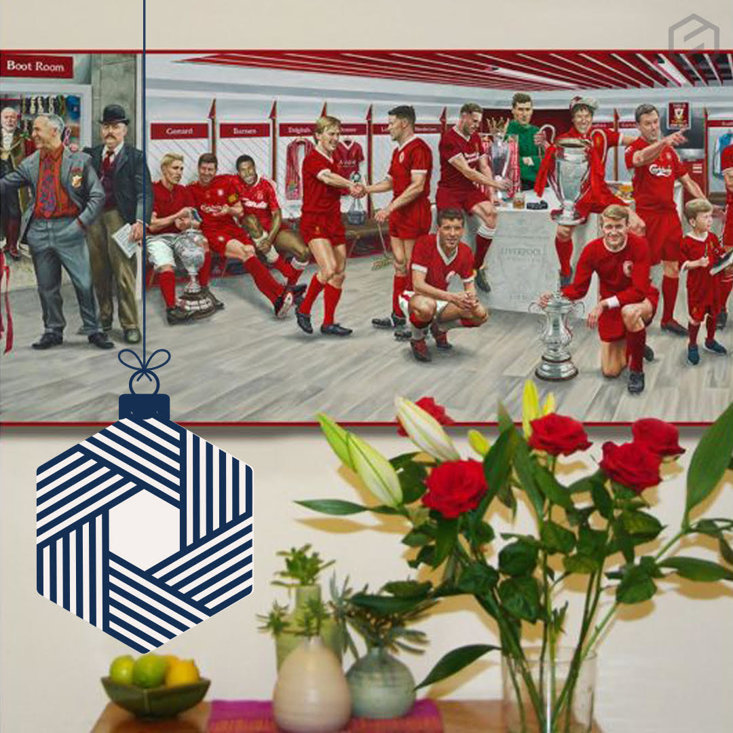 Liverpool supporters have already had a dream year as Mohamed Salah and Co ended the club’s 30-year wait for a league title in scintillating fashion. Now, for Christmas, fans can enjoy the present glory and past successes (of which there have been many) with this mesmerising Dream Scene canvas.

The Merseyside club commissioned renowned sports artist Jamie Cooper to create a ‘defining image that distilled the essence, spirit, past, present and future of this great club’ and he delivered with Anfield legends Bill Shankly and Bob Paisley joined by Jurgen Klopp in this updated print following the Reds’ triumph. 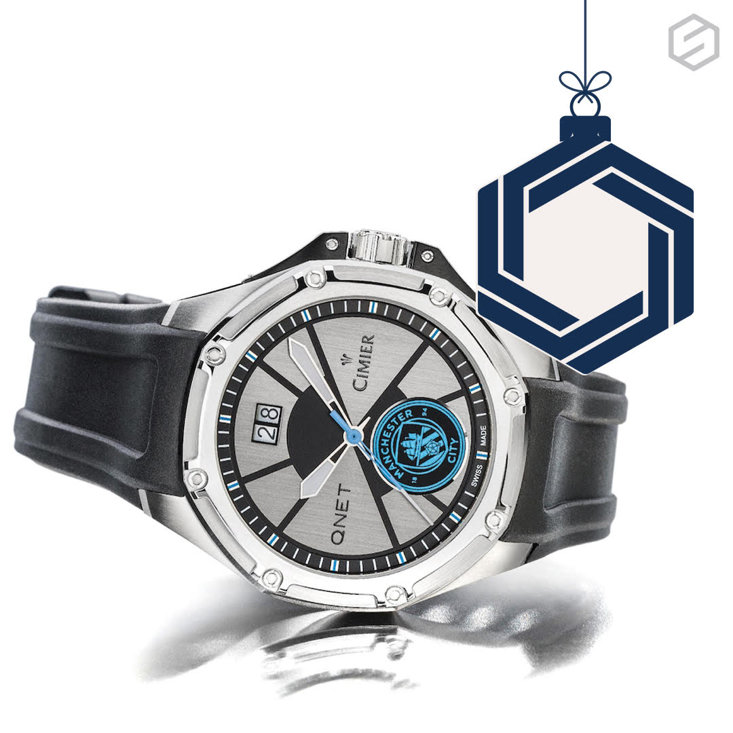 This is Manchester City’s time. Having lived in the shadow of fierce rivals United for decades as Sir Alex Ferguson led the Red Devils to countless Premier League titles, two European Cups and a host of domestic cup trophies, the blue half of Manchester reign supreme finishing top dogs four times since 2012.

For any City fans still pinching themselves (seriously, imagine watching Sergio Aguero and Kevin de Bruyne led by Pep Guardiola every week) they can check what time it is (it’s their time still and they’ll enjoy every second) with this brilliantly inspired QNET Triumph Blue watch. The Swiss Quartz timepiece features the club crest, a silver-tone finish and comes in a stylish stainless case. The glass is scratch proof sapphire crystal with anti-reflective coating and comes with a black rubber strap. 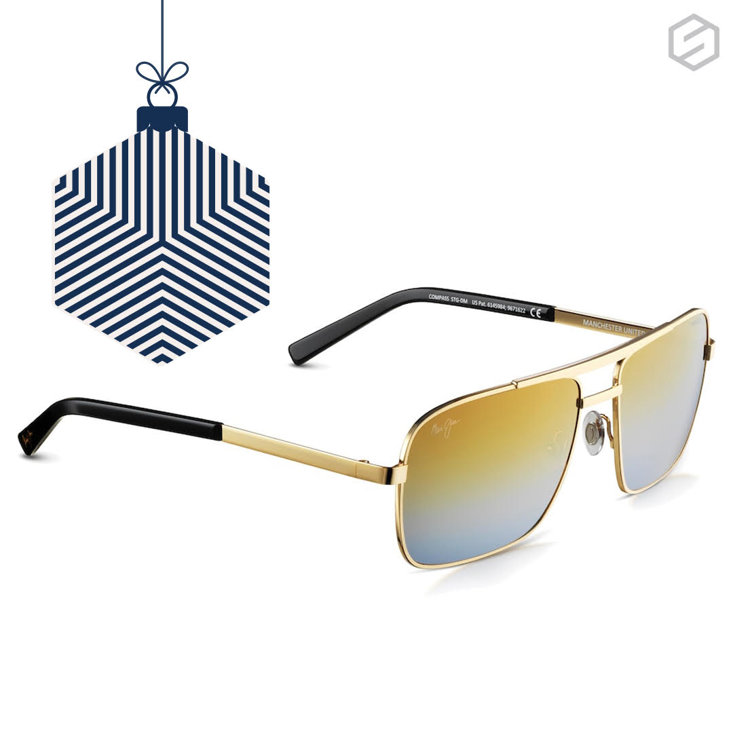 Part of the official Manchester United Maui Jim collection, these summer specs have been expertly-crafted to ‘celebrate your passion for the game’ and will help the Red Devil in your life ‘see the beauty of the world the same way Manchester United players and coaches do’. Although not sure how beautiful that view is right now!

Coming with a gold frame, it will remind them of the club’s former glories, which is the best they can do following their elimination from the Champions League this week.

x
Suggested Searches:
Tyson Fury
Manchester United
Marcus Rashford
Lewis Hamilton
F1
Air Jordan
More
football
The Star-Studded Harry Redknapp Podcast Hoping To Raise The...
Get the jam roly polys out of the oven, wind your window down and let all and sundry know that there [ ... ]
football
Get A Core Like CR7 With Two Of Cristiano Ronaldo’s Quick-Hit...
As the winner of 30 major trophies, five Ballon d’Ors and someone who is widely recognised as [ ... ]
football
Finally! The Definitive Book Separating Fact From Fiction In...
The branches of the great royal oak that is football are endless. A continuous weaving narrative, rich [ ... ]
football
British Football’s Greatest Grounds, The Book Celebrating Every...
Great Britain no longer predominantly finds its religion in churches and cathedrals. It’s more [ ... ]
football
Stocking Filler! Believe Us: How Klopp Transformed Liverpool...
Few journalists have followed Liverpool so fervently and passionately over the past several years as [ ... ]
football
With A Wealth Of Talent, The Players Podcast Flips The Script...
A collaboration between BBC Sport and Copa90? Yes please! Totally devoted to the ever burgeoning, ever [ ... ]
football
Jose Mourinho And Mikel Arteta Playing On Reputations Ahead...
It’s fair to say that the reputations of Tottenham boss Jose Mourinho and Arsenal manager Mikel [ ... ]
football
Gareth Southgate Looks To Inspire Next Generation Of Footballers...
There was a time. A most glorious time. Smiling faces congregated closely together in large, open spaces. [ ... ]
football
Andy Cole Shoots From The Hip In His No Holds Barred Autobiography,...
There may be a plethora of sports books being released this winter ahead of the festive season, but [ ... ]
football
Jamie Carragher’s Greatest Games Is The Book Football Fanatics...
Over the past seven years through his stellar television punditry work, one-club man Jamie Carragher [ ... ]
football
The Opportunities Given To Players By Southgate Is Paying Dividends...
Ok, so the Republic of Ireland didn’t lay a glove on them. But England’s performance in [ ... ]
football
Gomez Injury Latest Reminder Football's Eating Itself Whole...
Just when Liverpool thought their defensive crisis couldn’t get any worse, along came the news [ ... ]
football
The New adidas Podcast Putting Premier League Players Through...
Aiming to put some of the fastest players in football through their paces, host Ben Haines has recruited [ ... ]
football
Jurgen Klopp Has To Pick Jota Over Firmino And Not Just Because...
“Football is a simple game made complicated by people who should know better.” Fine words, [ ... ]
football
Goals And Punctures! The Biking Passion And YouTube Vids Of...
The general consensus, whether rightly or wrongly, is that footballers are all about the beautiful game. [ ... ]
football
Schoolboy Defending Leaves Man Utd And Solskjaer Facing The...
It happened again. It keeps happening. Manchester United came up against a well-drilled opposition who [ ... ]
football
Jurgen Klopp's Ruthlessness Has Allowed Diogo Jota To Become...
He’d netted goals in Liverpool’s previous three fixtures, including second-half winners [ ... ]
football
The Fascinating Book That Lifts The Lid On Brazil's Glorious...
“If we had won that game, football would have been different. That defeat for Brazil was not beneficial [ ... ]
football
Covid Can't Stop Ronaldo, Five More Weekend Sport Stories You...
Cristiano Ronaldo is still brilliant, Mercedes are still untouchable and Manchester City are still FA [ ... ]
football
Man United vs Arsenal's Narrative Has Changed But The Fixture...
Manchester United versus Arsenal. You read the fixture and what do you think of? Roy Keane and Patrick [ ... ]
football
Marcus Rashford Captured Our Imagination, He’s Sports Personality...
There’s a storm a brewin’. A Sports Personality of the Year size storm. It might seem like [ ... ]
football
‘The Red Apprentice’ Explores Solskjaer’s Surprising Path To...
To many, Ole Gunnar Solskjaer was a shock choice to relieve Jose Mourinho as manager of Manchester United, [ ... ]
football
Dazzling In Europe Again, But It's Time For Man Utd To Up Their...
In many ways it was a typical Manchester United win under Ole Gunnar Solskjaer, and yet it was also [ ... ]
football
Liverpool Need To Show What They're Made Of During Injury Crisis
Now we’re really going to find out what the Premier League champions are made of. Liverpool’s [ ... ]
football
Enjoy It While You Can - Messi Exit Will Mark The End Of A Clasico...
It has been the centre of the European sporting calendar for the last couple of decades. El Clasico, [ ... ]
football
A Tale Of Two Windows: Chelsea Could Leave Man United In The...
New goalkeeper, check. Commanding, experienced centre-back, check. Attacking quality, check. Chelsea [ ... ]
football
Dion Dublin’s Gaffer Tapes, The Podcast Taking You Inside The...
A good podcast will be a good friend. Whether you’re on a winter run, doing the weekly shop, or [ ... ]
football
Why Raheem Sterling Is Right To Call Out Social Media Over Racist...
“I don't know how many times I need to say this, but football and the social media platforms [ ... ]
football
The Book That Shows Why St Pauli Is A Football Club Like No...
Bayern Munich have won the Bundesliga for the past eight seasons. Borussia Dortmund have been champions [ ... ]
football
Everton Seek First Derby Win In A Decade With A Blueprint Belonging...
They say imitation might be the highest form of flattery, though there is absolutely no love lost between [ ... ]