Just over 150 years ago, in the offices of the newspaper that would become the very publication you are reading right now, one of the great totems of English football was established. The Football Association Challenge Cup. The grand old tournament has been through three trophy designs, 44 different winners and a century and a half of incredible moments since then. Detractors have tried to buff some of the gloss from the beautiful trophy in recent years, but it remains a truly special competition with a rich history and Chelsea and Liverpool will provide its latest showpiece final at Wembley on Saturday.

Over a century after my distant predecessors bore witness to its inception, this writer watched his very first FA Cup final. As a boyhood Manchester United fan who idolised Eric Cantona, the 1996 showpiece could not have been a finer entry point. But first there was the troublesome matter of a piano lesson, which I was ripped from the iconic ‘Road To Wembley’ coverage to attend. You have probably gleaned from the fact I am writing about football, rather than touring with John Legend, where my priorities lay.

The comprehensive coverage was one of the great things about past FA Cups. Far away from the slick presentation and giant iPads of modern football television, this was a grounded, almost quaint affair. Starting mid-morning, you were taken inside the team hotel to watch Ian Rush picking at a croissant, you might get a “play the game, not the occasion” quote from a passing manager. There would be FA Cup-themed variations of your favourite programmes. Who amongst you can resist the pull of a cup-themed edition of A Question Of Sport?

Then came the centrepiece before the centrepiece, the literal road to Wembley. Live footage of the team buses slowly trundling along Wembley Way. The sort of gripping vehicle scenes usually reserved for a Royal Wedding, or a fleeing O.J. Simpson. While we might see dozens of buses a week in everyday life, not all of them contain David May playing cards with Brian ‘Choccy’ McClair. 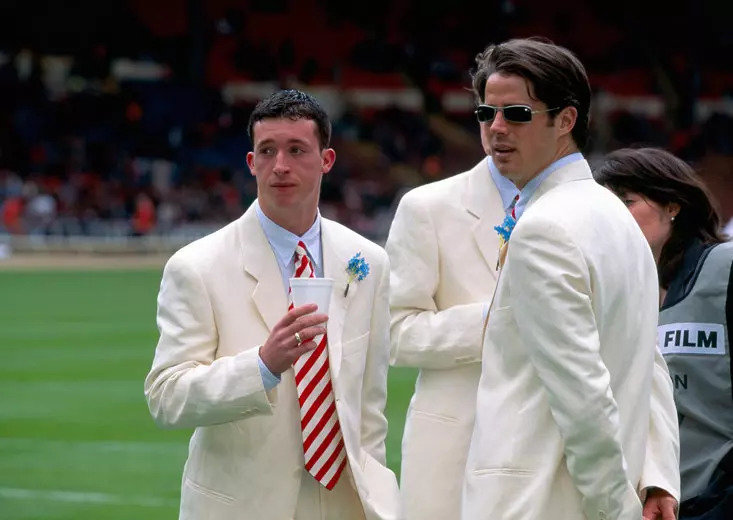 THE CREAM SUITS HAVE GONE DOWN IN FA CUP FOLKLORE

Upon arrival, you would see the players decked out in their finery. Watching my first final in 1996, I did not know what to expect. Therefore, when the Liverpool team arrived in their cream Armani suits, I thought this was perfectly normal. Perhaps these were “away suits”, I thought, so as not to clash with United’s more traditional navy outfits. Or maybe they had lost a coin toss, and thus were obligated to turn up looking like absolute pillocks. Whatever the case, the suits that were reportedly personally chosen by legendary stylist David James left an impression on young me.

Of course on FA Cup final day, then as now, a game of football would take place. A vitally important one. You would never see a smirking pundit tell you that while Wembley is a nice “day out”, the important thing is finishing fourth. The FA Cup was an end in itself, rather than a hood ornament on a team’s journey to bigger and better things.

The lingering spectre of the ‘devalued’ FA Cup haunts these memories of a simpler time. The aforementioned Red Devils are often blamed with bringing about the a-cup-alypse. It is true that Sir Alex Ferguson’s freshly-minted treble winners were the first club not to defend their title, withdrawing from the 2000 edition to take part in the FIFA World Club Championship (now known as the FIFA Club World Cup). Their withdrawal was at the behest of the Football Association, who hoped an English club’s participation in the FIFA-sanctioned competition would boost a World Cup bid. However you apportion blame, this withdrawal, coupled with the ever-increasing importance of European football, has led to the FA Cup being belittled.

I would argue this is a self-fulfilling prophecy. The more you label something as ‘devalued’, the more devalued it becomes. If pundits, ex-players and football insiders refrained from hammering home its decline, it would surely slow the rot. After all, there are plenty of reasons why the FA Cup still excites fans.

It remains the only place where you can see non-league teams possibly get the chance to face-off with Premier League big boys, often making enough money to ensure their survival in the process. It still throws up incredible upsets, such as Ben Watson’s last-gasp winner against Manchester City for Wigan Athletic in the 2013 final. And it still provides incredible moments for the fans of the winning team. Try telling a Leicester City fan the FA Cup doesn’t mean anything. Try telling a Manchester United fan that winning the grand old trophy would not be a welcome respite from five trophyless years. Whether it’s Manchester City asserting dominance in 2019, or Arsenal restoring confidence in 2020, the cup remains a thrilling occasion.

Which takes me back to that 1996 final, my first taste of a competition I will carry close to my heart for life. The actual game provided few highlights, and little of it remains lodged in my memory. I remember Roy Keane at his relentless best, and noticing that the rapper from New Order was playing for Liverpool. But the decisive moment is one that has lived with me ever since.

A teenage David Beckham, eyeing the road to superstardom from beneath his curtained hair, swings in a corner. David James, goalkeeper and chooser-of-suits, flaps a half-hearted punch at the ball. His intervention reaches the last person Liverpool wanted to give the ball to, King Eric. Cantona watches the flight of the ball, taking a step backwards before hitting it sweetly on the half-volley. James is still grounded from his attempted clearance, and the Frenchman’s strike glides through the crowded box and into the Wembley net. The FA Cup belonged to Manchester United, and from that point on, I’ve belonged to the FA Cup.

Which brings us to the latest final of the world’s oldest cup competition. Liverpool might have a supposedly bigger final on the horizon in a week's time and Chelsea are working against the backdrop of a takeover bid sparked by a war in Europe, but the FA Cup final still deserves the attention it got all those years ago. I'll be watching it, and I suggest you do too. Perhaps together, we can bring back the days when Andrei Kanchelskis tucking into a bacon roll was acceptable Saturday morning viewing.