Crystal Palace put in a superb display against a miserable Everton side to secure their place in the semi-finals of the FA Cup with a 4-0 win. Patrick Vieira’s men ran riot at Selhurst Park to the delight of their fans who can now make plans to travel across the capital to Wembley next month.

Marc Guehi celebrated the week he was called up to Gareth Southgate’s England squad by heading home from Michael Olise’s inch-perfect corner on the 25 minute mark. The centre-back was surprisingly left unmarked in the box and found the back of the net with a wonderful header, to send Selhurst Park bonkers.

Palace have not lost a game in which they have scored first all season and in truth it was rather against the run of play after Everton made a brighter start to proceedings. Richarlison’s penalty shout was denied due to an offside and the Toffees lost Andros Townsend through injury early on - a sad return to the capital for the former Palace man.

Once they hit the front, Palace had a huge chance to make it two. Jean-Phillipe Mateta fizzed the ball across the box and Wilfried Zaha was only denied a certain goal by the faintest of touches from Ben Godfrey.

Before the break they did score a second as Palace’s fluid attackers combined. Ebere Eze fed Zaha down the left channel and he cut the ball back for Mateta to seep home. Palace were exciting, dangerous and full of running - while you could visibly see any belief the Everton players had draining from their bodies.

Frank Lampard has not made the impact that Everton needed and although this game was a free hit for the Toffees, they followed the same pattern as their Premier League showings. Once they fall behind, there is simply no belief. More worryingly, this expensively assembled squad now look to have a real lack of ability. 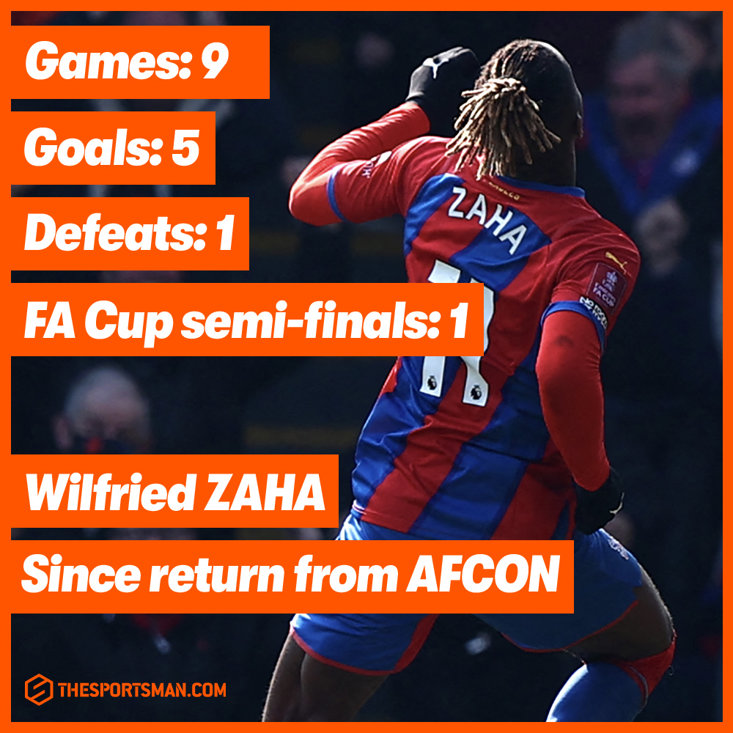 Dominic Calvert-Lewin was introduced at half-time as Everton huffed and puffed, but still it was the home side that looked more dangerous. Zaha, now surrounded by players on his wavelength, was a constant threat and should have put the game to bed on 76 minutes as he sat his marker down, but then took too long to shoot when he had space within the penalty area.

However, then the third goal did come. Zaha played the ball into Olise who completely mishit his left-footed effort and it spun up onto Jordan Pickford’s post. The Ivorian was the quickest to react and passed the ball into the net, as Palace began to make their plans for Wembley.

Will Hughes added the fourth off the bench with a close range finish after a Jordan Pickford save, and this was the icing on the cake of a sensational Sunday for Palace.

They made the 2016 final, which they lost to Manchester United and have a rich history in this competition, but now they are making more. This vibrant side are so good to watch and will likely be the underdogs heading into the final four, but Patrick Vieira’s side can be so dangerous.

Meanwhile, Premier League survival is now the sole target for Lampard’s Everton, but on this showing, it is far from guaranteed. There was no fluidity, no class and a real lack of grit on display today, which is worrying given the boost they received in midweek with that win over Newcastle.