Athletics
News
A number of British athletes have made hay at the Paralympics down the years
Conor Keane
17:03, 02 Sep 2021

The Tokyo Paralympics is drawing to a close and there have been some sensational moments for Great Britain. The headline achievement came from Dame Sarah Storey, who became ParalympicsGB’s most successful athlete of all time by claiming her 17th gold medal to defend her women’s C4-5 road title.

The historic moment meant that the 43-year-old edged ahead of the previous record holder Mike Kenny, who claimed 16 golds during his Paralympics career. To celebrate this momentous milestone, The Sportsman looks at the top five British Paralympians in history.

Storey became Britain’s most successful Paralympian in history after she held on to the women’s C4-5 road title, which has been hers since London 2012. This gold was her third at the Tokyo Games in what has been her eight participation since her debut at Barcelona 1992 as a swimmer at just 14 years old. Her first two golds came during the 92 Games in 100m backstroke and 200m individual medley, while she also claimed three silvers and one bronze on her debut.

She retained her two golds four years later while adding the 100m breaststroke to her rapidly bulging CV. She switched to cycling in 2005 after a persistent ear infection and her incredible form transferred from the pool to the track as she has taken golds in the individual pursuit, time trial, road race and the 500m time trial. Her medal tally for the Paralympics is an impressive 28, giving further evidence of her status as the greatest Briton to ever grace the Paralympics.

The retired swimmer had stood tall above his fellow Brits when it came to Paralympic pedigree, but now that he has been surpassed by Storey he has to settle for the silver medal. Following a working accident that left him paralysed, Kenny started swimming as part of his recovery before becoming the Paralympic great that we know today. Competing in the 1A category Kenny claimed three golds in his debut Games at Toronto 1976 in the 25m freestyle, 25m breaststroke and the 25m backstroke.

He went on to represent Great Britain in a further three Paralympics, attaining a further 13 gold medals which propelled him to greatness and, for 41 years, the status of Team GB’s most successful Paralympian. 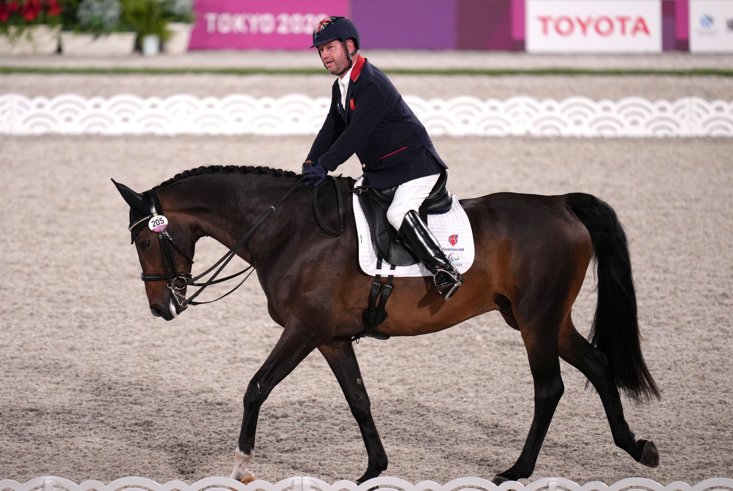 SIR LEE PEARSON HAS 11 GOLDS TO HIS NAME

Like Storey, Pearson competed at Tokyo 2020 at the age of 47. The equestrian athlete has been a GB Paralympian since Sydney 2000 when he won his first three gold medals in the mixed dressage championship grade I, mixed dressage freestyle grade I and mixed dressage team open. He laid the foundations for a decorated Paralympics career as he went on to attain a further 11 gold medals over the next five Games, including three in Tokyo, making him one of the elite British Paralympians of all time.

The former wheelchair racer, who is now a Baroness and TV personality, had an incredible career on the track in the Paralympics, winning a splendid 11 gold medals over the course of five Games.

Her gold medal triumphs came in the 100m, 200m, 400m and 800m races. After her breakthrough in Seoul 1988, when she claimed bronze in the 400m, Grey-Thompson came back stronger and more determined four years later. In Barcelona she earned four gold medals, setting the bar for what was a tremendous career.

It is another swimmer that completes the top five in Welshman Roberts. Competing in the S7 category, he made his Paralympics debut at Sydney 2000, making a spectacular debut as he claimed three gold medals in the 50m freestyle, 100m freestyle and 4x100m freestyle.

His astonishing Paralympic breakthrough spurred him on to achieve more golden success at the 2004 and 2008 Games, where he added a further eight golds to the three he collected in Sydney. At Athens 2004, he added the 400m freestyle title to his CV while retaining the three golds he won four years prior.