Dame Sarah Storey aims to become the all-time leading British Paralympic gold medalist tomorrow, as she goes for her 17th medal in the Women’s C4-5 road race. She has two Tokyo 2020 golds to her name already, having claimed top spot in the Women’s C5 time trial yesterday, to go with her medal from the C5 3000m individual pursuit. The 43-year-old first competed in the Barcelona 1992 Paralympics as a swimmer, before switching the pool for the pedals in 2008. Should Storey win tomorrow’s road race, she will overtake swimmer Mike Kenny to stand alone atop Britain’s Paralympic gold table. She already holds the overall British record for medals at the games.

As the Dame claimed her record-equalling gold on Tuesday, she did so in utterly dominant fashion. The cyclist finished a minute-and-a-half ahead of teammate Crystal Lane-Wright, and was so far ahead that at times she came close to joining the back of the men’s race that was also taking place on the track. 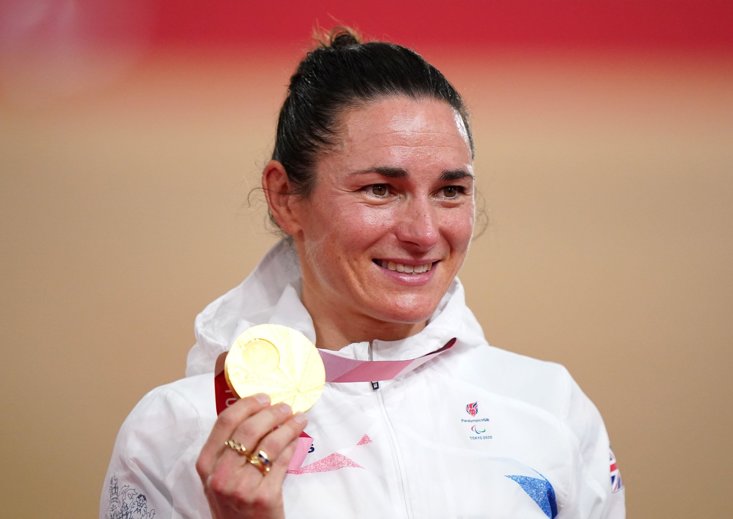 Storey was just 14 when she began her Paralympic journey, as she left Barcelona with a brace of gold medals. Four years later, the Eccles-born athlete would follow that success with three more golds, her last in swimming events. She won multiple silvers and bronzes at the following two games, but withdrew from the pool due to a long-term ear infection. Storey had already overcome a chronic fatigue syndrome diagnosis aged 19, and was not about to let this latest setback end her incredible athletic career.

Sarah would emerge at the 2008 games as a cyclist, adding another two gold medals to her swelling collection. Her Beijing highlight came when winning the individual pursuit, setting a time that would have seen her rank in the top 8 at the Olympic finals.

Four years later, Storey would attempt to become a double champion, as she competed for the right to go to the London 2012 Olympics, alongside competing in the Paralympic games. She helped Great Britain to victory at the Cycling World Cup in Colombia, but ultimately would not be chosen for the Olympic team. Once again displaying her amazing resilience, Storey would enjoy her best Paralympic games performance to date, taking home a quartet of golds in London. This incredible performance would earn Storey the title of Dame, as well as a nomination for BBC Sports Personality Of The Year.

Storey’s Rio 2016 victory in the C5 3000m individual pursuit would crown her as Britain’s most successful female Paralympian. She now stands on the precipice of becoming the most successful Paralympic athlete this country has ever seen. The way Storey has crossed over from another sport, overcome health issues and blown past her Olympic knockback to continue racking up medal after medal is truly inspiring. At Tokyo 2020 she has already won medals, and broke records doing so. In the heats for the individual pursuit, she broke her own world record by four seconds. Tomorrow morning, Dame Sarah Storey will attempt to make this Paralympics even more monumental, for herself and British para-athletics.

Storey is currently 25/1 to win the 2021 BBC Sports Personality of the Year award with Betfred.