Boxing
News
The Brit was quick to knock out Dinu in his first fight since a bruising defeat
Kris Voakes
22:25, 05 Jun 2021

British heavyweight hopeful Daniel Dubois made short work of his return to action following his 2020 defeat to Joe Joyce, knocking out Bogdan Dinu just 31 seconds into the second round of their bout at the Telford International Centre on Saturday night.

The speedy victory gives Dubois the WBA Interim Heavyweight title, but more importantly he bounced back to winning ways in his bid to earn the headline belts in the showcase division further down the line.

‘Dynamite’ has been left having to answer accusations about his heart after claims that he had quit when taking a knee in the 10th round against Joyce last time out, but the ruthless win on Saturday was a great first step in rebuilding his reputation as one of the young stars of heavyweight boxing.

Dubois had the better of the first round, showing a positive approach and working over his Romanian opponent with good combinations, but he came out at the start of the second seemingly intent on finishing Dinu off.

After a flurry of punches, Dubois delivered a stinging right hand which floored Dinu, and there never appeared much chance that the Romanian would get more than a knee off the canvas. 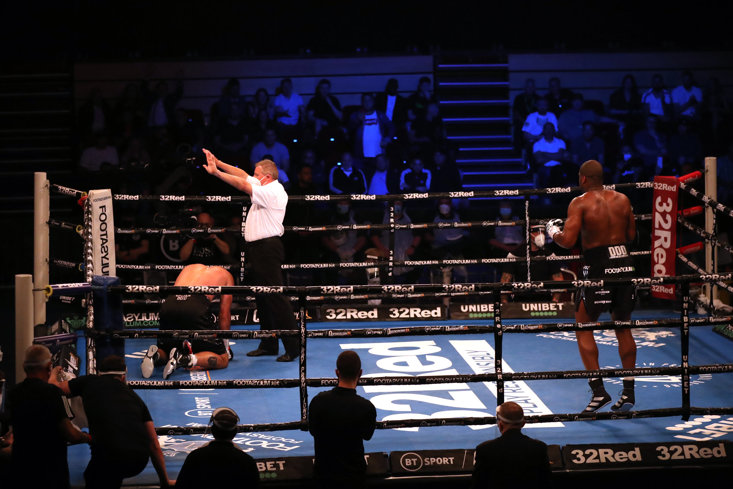 While Dubois will face tougher opposition in the future, Dinu is a man who had taken Jarrell Miller to four rounds and Kubrat Pulev to seven in previous defeats, so the early stoppage will pump the Brit with confidence following his jarring loss to Joyce. It was also justification for his change of trainer in taking Shane McGuigan on board.

“It’s been a very rough ride, and I’m glad to be back,” Dubois told BT Sport after the win. “There were a few thoughts going through my head but I listened to Shane, what he told me, and I stuck with instructions and you saw what happened.”

McGuigan added of his fighter: “He’s only 23 years of age, he’s young, he’s obviously suffered a little loss, but he needs to go back and rebuild, and I think we did that. I think that was a fantastic performance, we didn’t have long but give us six months or a year and you’ll see the best of him.”

Dubois added that he’s ready for whoever comes next, but insisted that he has unfinished business with Joyce somewhere down the line. “I want to clear that up, I want to have a rerun again and I want to set that up.”