Football
News
The Sportsman exclusively caught up with the Livingston boss ahead of the 75th edition of the League Cup showpiece.
Elliott Bretland
08:00, 27 Feb 2021

David Martindale never dreamed he would be managing Livingston in the final of the Betfred Cup back during the days when he volunteered at the club two days a week, assisting with basic training duties like simply putting cones out.

Arrested in 2004 and handed a six-year prison sentence after being involved in organised crime, the 46-year-old turned his life around and by 2012, he had graduated with a degree which landed him a job in the construction industry before ending up back in football having been a talented player as a youth.

As he stands on the Hampden Park touchline, his story will inspire many. However, it’s only now Martindale sees how his story would have such a positive impact on others.

“I didn’t really see it that way myself,” he admits, “but sitting back and reflecting on it and all the letters and all the positivity on social media, I think people have taken inspiration from the story.”

He shakes his head in disbelief when he thinks about how far he has come.

“Not at all, at no point when I came into Livingston Football Club, did I envisage I would one day take the team to a cup final and I would be the manager. I never thought about that once,” he says. Now he is here, he is keen to repay the faith shown in him by the fans, directors and owners at the club by lifting the Betfred Cup. 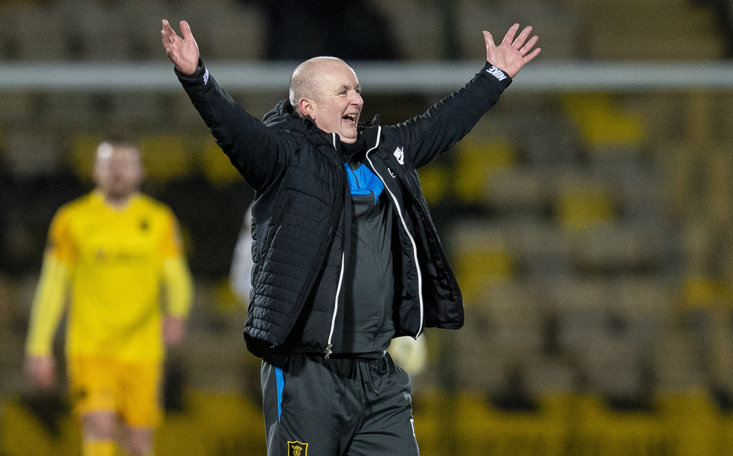 “It would be incredible to do that for them and it would be brilliant to give the fans something to cheer about as they haven’t been to any football games this season. I’d be personally delighted, I’d see this as maybe a little bit of payback to the directors and the owners if I can help Livingston lift a major trophy. A wee bit of payback for the faith they’ve shown in me.”

Working his way up through the ranks, gradually working as a coach and doing some recruitment while obtaining his badges, he was appointed interim coach in November 2020 and took to management with ease, going unbeaten in his first 14 games.

“Getting to the final played its part in going unbeaten” he believes. “There’s no doubt the momentum was absolutely huge for that. The boys kept ten clean sheets, that in itself is a phenomenal start. It was important in getting us to the final.”

It was a memorable start one game really stands out.

“My first game in charge against Ayr United, we were three nil up in 15 minutes. It was a very easy introduction into management” he smiles. “You could actually enjoy the game. That will always stay in my memory but obviously at Hampden, a semi-final and getting to the final, both games played a massive part.”

It was actually St Johnstone, Sunday’s opponents, who brought Martindale’s run to an end but he insists it was business as usual. He likes to keep things simple and won’t be wearing a suit on the day of the final.

“If I was to turn up with a suit on, the boys would think ‘What’s going on? What’s happening here?’ I’ll keep everything very normal. When we were on that incredible run of games, we didn’t do anything different, we don’t get too high, we don’t get too low. I think we’ve created a very stable environment which allows the boys to focus on the next game. That’s very much what I’m all about myself.

“I think my own philosophy develops every year. It’s very organic, I’ve read a few books on Alex Ferguson and stuff but I don’t read that book and think ‘I want to replicate what I’ve just read’.

“You’re evolving on a daily basis if you are watching football, you are studying football. I wouldn’t say I’ve looked at any manager and thought I’m going to do this.”

Livingston last won this competition 17 years ago and Martindale would love to do it again.

“Since I’ve been at the club, a lot of the staff and fans talk about the famous cup run in 2004 so for us having the opportunity to potentially do that again, I think the boys will go down in history books as being legends and I’d love for that to happen.”