Football
News
Czech Republic stunned ten-man Netherlands with a 2-0 win in Budapest to set up a tie with Denmark in the quarter-finals
Gary Maiden
19:02, 27 Jun 2021

Matthijs de Ligt saw red for the Netherlands in Budapest as Czech Republic took advantage to claim a 2-0 win and set up a Euro 2020 quarter-final clash with Denmark.

Jaroslav Šilhavý’s side were more than alive in the tie before VAR’s intervention to reduce the Dutch to ten men, and Tomás Holes found himself unmarked at the back post midway through the second half to head home and set up an unlikely Puskás Aréna win. With ten minutes left on the clock, man of the moment Patrick Schick stepped up to stroke home his fourth goal of the tournament to put the result beyond doubt.

The turning point undoubtedly came when de Ligt was given his marching orders, with VAR recommending that referee Sergei Karasev check the monitor after initially brandishing a yellow card. In overturning his initial decision, only Edgar David has been sent off more for the Netherlands than 21-year-old de Ligt.

It was more misery for the Dutch, who have now managed just two wins in their eight European Championship knockout games since winning the tournament back in 1988.

The game itself started as the script intended, with Denzel Dumfries proving once again why he is one of the most talked about players at the tournament. The PSV Eindhoven full back came close to opening the scoring inside the opening minute when he was inches away from meeting a Donyell Malen cross. He came close once again just ten minutes later when de Ligt guided a header back across goal only for Dumfries to fire his shot wide and high.

In a first half that failed to ignite, Czech Republic came close to opening the scoring only for de Ligt to prove the hero as he threw himself in front of a Antonin Barak strike from close range.

The second half started much brighter, with de Ligt quickly going from hero to zero after losing his footing just outside his own area, only to prevent Schick from breaking through in a one-on-one with Maarten Stekelenburg. There weren’t too many complaints with the initial yellow card, but VAR quite rightly suggested a second look and de Ligt’s dismissal left Oranje with a man down with over half an hour left to play. 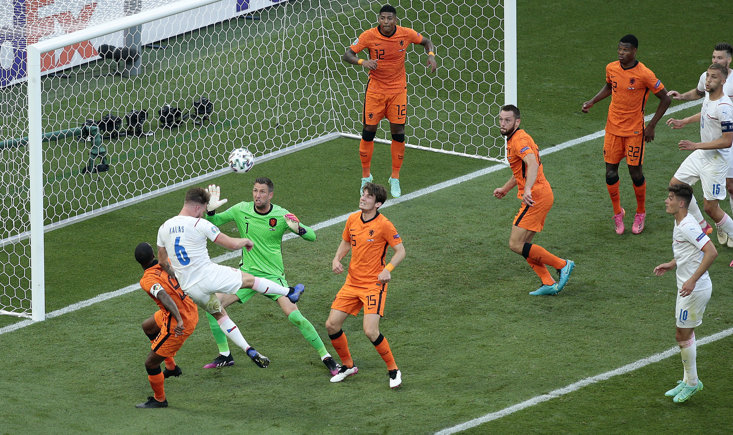 This was the Netherlands’ first red card in the Euros since John Heitinga was sent off in 2004. Their opponents that day? Czech Republic.

It was a dreadful couple of minutes for Frank De Boer’s men, who should have gone a goal ahead moments before when Malen failed to round Tomáš Vaclík as the Czech stopper bravely smothered at his feet.

Czech Republic pressed on in 31-degree heat and Pavel Kaderabek saw his curling effort well blocked by Dumfries as they looked to put the game beyond doubt. Schick did just that on the 80th minute, when he met a Vaclík pullback to expertly tuck home and double his side’s lead.

A quarter-final tie against an emotionally charged Denmark won’t be easy, with Kasper Hjulmand’s men scoring four in each of their last two games – including a 4-0 drubbing of Wales on Saturday.

There will be an inquest in the Netherlands’ camp with some of their major stars going missing when it mattered most. Memphis Depay and Georginio Wijnaldum were mere spectators for long periods, and they will be disappointed with their efforts when they review the match tomorrow.

Czech Republic won’t care, and with Schick well and truly in the running for the golden boot, who knows how far they can go.