West Ham United condemned 10-man Aston Villa to their fourth straight defeat and second at home this season as they ran out 4-1 victors at Villa Park on Sunday. Goals from Ben Johnson, Declan Rice, Pablo Fornals and Jarrod Bowen helped to propel the Hammers to fourth in the table, level on points with third-placed Manchester City. However, the result could have dire consequences for the home side as their defence looks weaker with each passing game.

It was another torrid afternoon for the West Midlands outfit, who have now dropped to 15th in the table, just three points above the relegation zone. As is always the case in the Premier League, the spotlight will be on manager Dean Smith, with their recent form and performances having taken a turn for the worse after making giant strides of progression last term.

Villa did not play as poorly as they did against Arsenal in their previous fixture but their mistakes at the back are becoming an issue, while Ezri Konsa’s first booking of the season was a straight red card after a VAR correction. Smith made the bold decision to drop his captain Tyrone Mings from the starting lineup after the England international’s dramatic drop in form this campaign, but he was called into action after Konsa was given his marching orders.

In recent weeks Smith has tinkered with his back line, trialling a three-man defence in the dismal first-half showing in the defeat against Arsenal last week, then reverting back to a four this week to no avail. His defence were praised for their organisation and discipline last season, but it is proving to be their downfall this year as the club have spiralled in recent weeks. This is something that the 50-year-old has to address quickly, because his job could well depend on it. 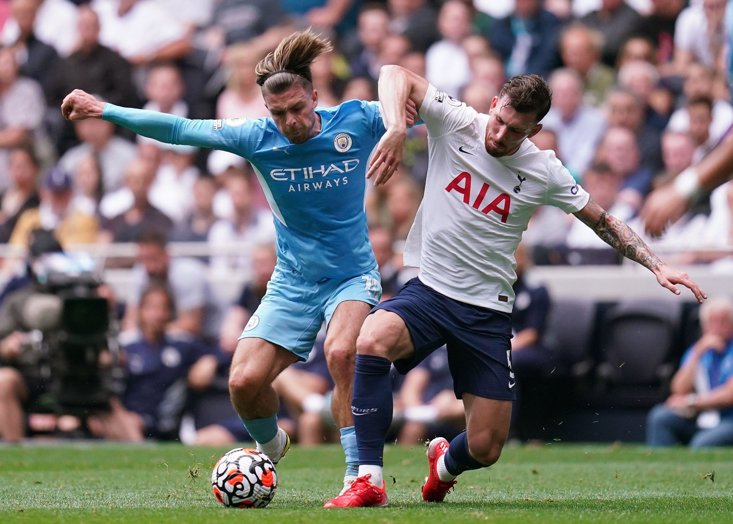 GREALISH'S DEPARTURE FOR CITY HAS HAD A BIG EFFECT

Following the record sale of Jack Grealish to Man City in the summer, questions were asked about how the club would replace the attacking threat the England international had. They got the chequebook out for the marquee signing of Championship Player of the Season Emiliano Buendia, along with Leon Bailey and Danny Ings, and they have struggled to have the instant impact many expected of them upon their arrival.

What needs to be remembered is that there has been plenty of change in the squad and there is still going to be a transitional period for the new arrivals, which will mean it will be some time before they can truly be judged. It will also take time for Smith to gain more insight into how to get the best results out of the players he has available.

Some may feel that the club should have invested in new defenders, but Smith’s back line were well-drilled as they kept 15 clean sheets. This dip has come as a shock to many but last year shows that Smith knows how to tighten up his defence. He will need to do it quickly, though, as Villa have not picked up a single point in October. It may be Halloween, but the West Midlands club have looked spooked for the entire month.

It didn’t take long for Villa’s defence to be undone again as Johnson’s drilled effort found the bottom left corner inside the opening 10 minutes. The Hammers continued to threaten the hosts in the final third but Smith’s side were able to retaliate as Ollie Watkins slotted home after being found by Emiliano Buendia, who pulled the ball back to the striker on the penalty spot. This sparked Villa into life as they looked more determined on and off the ball, but their hard work to pull themselves back into the game was undone when Rice fired West Ham back in front with the home side’s defenders failing to close him down on the edge of the box.

Things got worse for Smith early in the second half as Konsa was sent off after a VAR check for bringing down Jarrod Bowen just outside the penalty area, giving Villa a mountain to climb. They nearly pulled a rabbit out of the hat when Watkins had a header denied by Lukasz Fabianski, who tipped the ball onto the crossbar, and that brought the home crowd to life. The game was sealed late on though as quick-fire goals from Fornals and Bowen sealed a sizeable victory for David Moyes’ side.

While the Hammers are absolutely flying, Villa and Smith are facing increasing questions about their own results.