Football
News
Rice is going from strength-to-strength but it feels like of a matter of when and not if he'll leave the Hammers
Andrew Dillon
12:17, 29 Apr 2022

Declan Rice is only going in one direction regardless of what happens to West Ham. The steady beating heart of his club and tipped to be England captain one day not far off. He is going from strength to strength.

A price tag of £150 million underlines what West Ham manager David Moyes thinks of his ability and potential. And watching the midfielder on Thursday pulling the strings for his team in a captivating Europa League semi final was another classic showcase for his talents as if we need reminding.

Rice is a wholehearted player and clearly loves playing for West Ham. But one week he kisses the badge and the next he is rejecting the latest big money contract offer. It’s behaviour which suggests it is when and not if he decides to leave the club which picked him up after rejection from Chelsea aged 14. That’s fair enough.

There’ll be plenty of takers if he forces through the issue this summer but Rice is not that kind of young man. He is different to many who have been seduced by the bright lights of the big six clubs only to burn out or be buried under squad rotation.

He is 23 and technically has three years left on his current contract at West Ham if the club insists upon it and plays hardball. His old mates at Chelsea could do with him in their team regardless of what is said about him behind the scenes.

Manchester United need a midfielder in the Rice mould with a massive rebuild required and exciting, young, English talent like him worth their weight in gold. The imminent departure of Nemanja Matic creates a convenient, ready-made vacancy in Rice’s position, too.

There can be no debate that Rice is good enough to play at Old Trafford. This season is a rarity in that it would be a step down from the Champions League chasing Hammers. 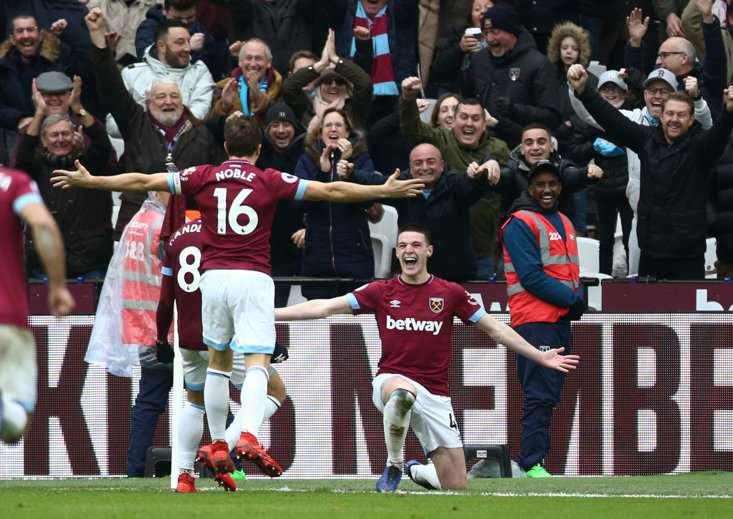 Manchester City, Arsenal, Liverpool: He would not look out of place at any of those clubs. In these days of player power there is every chance that if Rice went into a sulk and demanded a move away he would get one. And in an industry where careers are short and ambition high, who would blame him for shoehorning his way out of East London and onto bigger things?

But if Rice is so different from lots of his peers, and we hear consistently that he is more grounded than the London Stadium pitch itself, he should stop and think. He is only going to get better over the next 12 months. He will be appointed full-time West Ham captain in the summer when stalwart Mark Noble retires.

West Ham should give him a pay rise regardless of whether he signs a new contract. The step up in responsibility should be the trigger for a financial sweetener in the hope it buys them more precious moments with the best player at the club. In turn that provides him with 12 more months to monitor progress at Old Trafford since Man United are the favourites to sign him eventually and so they should be.

If incoming boss Erik ten Hag can live up to his billing and turn around this ailing giant, then Rice would be able to join an awakening monster and be the centrepiece of an entire new era. Should ten Hag fail like many of his predecessors, then Rice has had a lucky escape.

Man City have already ruled out a move this summer but that doesn’t mean they won’t be interested next year. Liverpool the same and so on with Arsenal. Mikel Arteta is building something with The Gunners in particular but by summer 2023 there will be a clearer idea whether it’s a long term sustainable project or another flash in the pan.

Rice has played 32 of West Ham’s 33 Premier League games this season. Nothing moves there without him being involved. He should enjoy leading West Ham for one more season and bide his time - which is on his side.