Declan Rice is a stupendously good footballer. Having shone at Euro 2020 for England and helped his nation into the final of a major tournament for the first time in 55 years, he has carried his exceptional form into the new Premier League season.

He is the beating heart of David Moyes’ West Ham side and has proved himself to be one of the most vital and talented midfielders in the Premier League. To pigeon-hole him as a defensive midfielder actually doesn’t do him justice, given his pace and the way he can carry the ball past defenders at ease and in that sense, he brings a unique quality to this team which are currently fourth in the table.

“There was a bargain to be got with Declan at £100m. That bargain’s now gone,” his manager told Sky Sports.

It is testament to Rice’s quality that £100m as a valuation no longer seems outlandish for a midfielder who could utterly transform one of the top teams. Such is his ability on the ball, he has only been dispossessed once in the Premier League this season, which is simply outrageous given he has played every single minute of the campaign so far and had the 12th most touches in the league.

His mistakes have almost been completely ironed out of his game (pardon the pun), and now he is a reliable and integral force for both club and country. But at 22, he has the world at his feet and although his contract runs until 2024 with the option of an extra year, the big clubs are already casting a keen eye his way.

When West Ham take on Liverpool on Sunday afternoon, Rice will be the most talented central midfielder on the pitch. That is not to disrespect the likes of Jordan Henderson or Fabinho, two incredible midfielders in their own right, but it does point to the fact that the Englishman would flourish for one of the top teams. 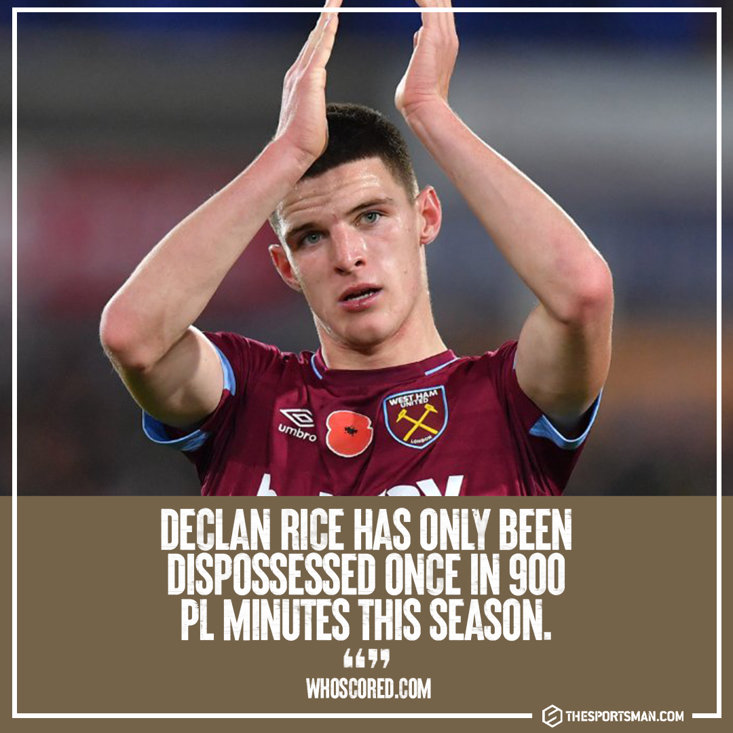 At the present moment he is emerging as one of the best in the league for a West Ham side punching well above their weight, but the time will come when he has outgrown East London. Although the club stand a realistic chance of making it into the Champions League given the start they have made to this season, the wages on offer and chance to win a Premier League title is likely to draw him away at some point.

And every big club would love to have him. Manchester United in particular have a gaping hole in the centre of the park which is proving to be their soft underbelly at the minute despite all of their attacking talent. Imagine for a moment Rice slotting into the centre of the park and the impact that would have on United’s fortunes. They stand little chance of winning the title this term, but with Rice in midfield, they would arguably boast the strongest squad in the league.

Chelsea is the club where it all began for Rice and having left their academy at the age of 15, the Blues could also entrust the future of their midfield to a former academy starlet. They are one of only a handful of clubs that could afford to pay his growing asking price, along with Manchester City, who have Rodri but could do with some security in the middle of the park once Fernandinho leaves.

Rice’s endless talent has no limits. He could play for every single club in the world and it won’t be long until he is playing Champions League football. It could well be for West Ham next season, but at 22, he still has time on his side. A move to one of the big boys will come in time, but the London club is allowing him to flourish for the time being.