On a stifling hot day at Villa Park, Everton fell to their second successive defeat which leaves them pointless after two Premier League games. Against Chelsea they were poor, but in the 2-1 loss to Aston Villa they were toothless up top which leaves Frank Lampard with issues to address before the transfer window shuts.

Starting with Anthony Gordon up front supported by Demarai Gray and Dwight McNeil it was a clear sign that Lampard needs some help from the board. The sale of Richarlison was a necessity from a financial standpoint, but the injury to Dominic Calvert-Lewin has put paid to any attacking threat that Everton had.

Salomon Rondon began on the bench such is Lampard’s lack of faith in the Venezuelan, as Gordon energetically ran around without causing a physical Villa back line any major issues. The main reason that Everton lost in the heat was that Villa had the cutting edge and they didn’t, which was proved by Danny Ings’ opener.

He returned to the starting XI and returned to the scoresheet with a wonderful finish. The visitors had looked untroubled after a slow start from both teams, but as they ventured forward, Everton were caught out at the back.

Dwight McNeil was robbed of the ball by John McGinn and the new Villa captain sprung an attack that led to Ings having the ball at his feet in his box. From that position, a quick turn and finish gave Villa their first goal of the season and the hangover from their display at Bournemouth was lifted.

Ings and Watkins were bright as a duo and their attacking threat was the key difference between the two sides. The Toffees were toothless and even if the hosts weren’t razor sharp in the heat, they had the players to produce at the key moments. It is what being a forward is all about. 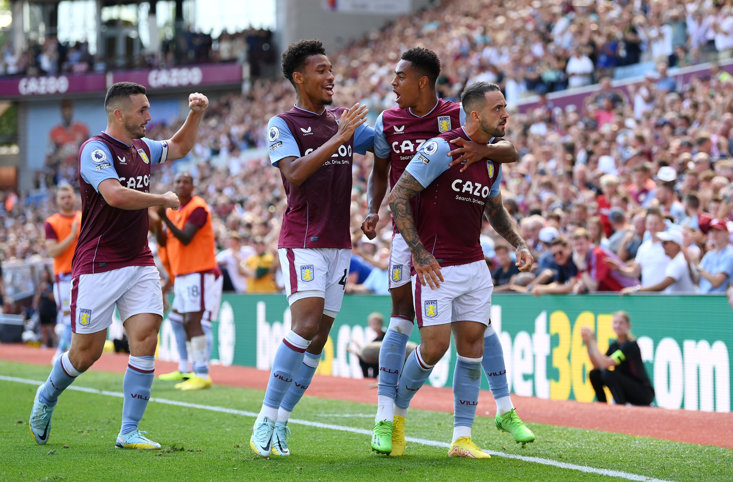 Everton were brighter in the second period as Gray was denied by Emiliano Martinez before Rondon was called onto the pitch just after the hour mark. However, Emi Buendia was terrific having replaced an injured Coutinho and he scored a wonderful second after playing a quick one-two with Watkins.

Everton were carved open, but they did have one bright spark from the bench. New signing Amadou Onana made a huge difference in midfield and helped pull one back as he fizzed a ball across goal from kick-off and Lucas Digne turned into his own net.

All of a sudden, the visitors were back in it and they should have levelled late on as Gordon was denied by Martinez before Tyrone Mings made a crucial interception when Rondon looked as though he was going to turn it in. Onana then could have equalised from close range but he was denied by a stunning block from substitute Calum Chambers.

They may have lost, but Lampard’s side came on strong in the last five minutes. Their starting XI was weak, especially in the forward areas and they will need reinforcements to stay in this division. If Lampard doesn’t get them, it could be another season of struggle for the Toffees.