Football
News
Kasper Dolberg's brace in Amsterdam led his side through to the quarter-finals
Simon Lillicrap
18:56, 26 Jun 2021

Denmark proved they have the quality and tactical nous to go deep into Euro 2020 with a 4-0 win over Wales in Amsterdam, which saw Rob Page’s side crash out at the last-16 stage. Gareth Bale and co. were unable to repeat their feats of five years ago, but Denmark, having lost their first two games and had to cope with the emotional trauma surrounding Christian Eriksen's cardiac arrest, now look like Euro 2020’s dark horses.

Defeats against Finland and Belgium put Denmark on the brink of elimination, but back-to-back wins have sent them into the last eight, where they will face either the Netherlands or the Czech Republic. Kasper Dolberg, who came in for the injured Yussuf Poulsen, stole the show with an impressive brace which showed just how much strength in depth the Euro ‘92 champions have. Joakim Maehle and Martin Braithwaite added one each late on either side of a Harry Wilson red card in a result that didn’t flatter the Danes, as Wales came up short.

Manager Kasper Hjulmand also proved he has the acumen to guide this side in the knockout stage. For the opening 15 minutes Bale and Aaron Ramsey caused the Danish back five problems as the Real Madrid man fired a shot past the far post early on. The pace of Bale on the right and Daniel James on the left was pinning the wing-backs back and Denmark couldn’t get out.

The Wales onslaught was so fierce that Hjulmand pushed Andreas Christensen into a defensive midfield role to try to deal with the dominance the Welsh were showing on the ball. It was a tactical shift that would win them the tie, and clearly a plan B that he had considered during training as the side took to the new system with ease. Three Denmark corners in a row were dealt with by the towering Kieffer Moore, but the Danes, backed by a vocal crowd in Amsterdam, were able to establish a foothold in the game.

That foothold turned into a 1-0 advantage thanks to a superb strike from Dolberg, back at the ground where he spent three years playing for Ajax. Two incisive passes put Wales on the back foot and as Dolberg picked up the ball on the edge of the area he curled the ball past the helpless Danny Ward. 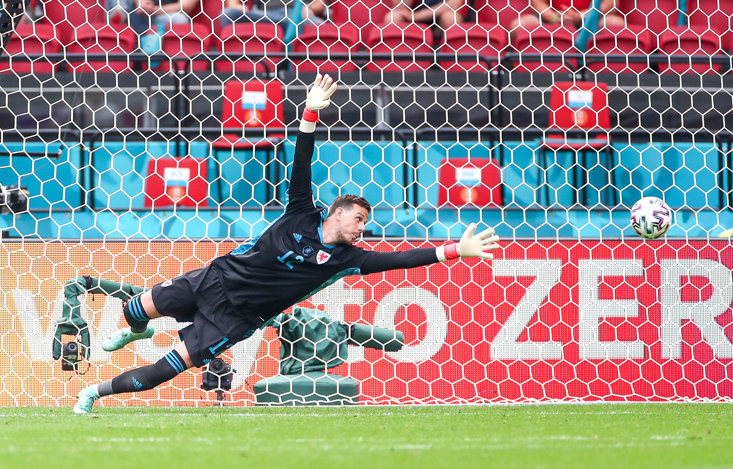 DANNY WARD CAN DO NOTHING TO KEEP OUT DOLBERG'S FIRST GOAL

Wales were on the ropes, and more Danish pressure followed as Dolberg nearly doubled their lead after some wonderful footwork from Mikkel Damsgaard led to the Nice striker flicking the ball towards goal from just four yards out, but Ward was equal to it. If Hjulmand had shown his managerial experience, Page, who has done brilliantly since taking the reins, was unable to respond.

The second goal that Denmark threatened before the break came just two minutes after half-time. Moore was adjudged not to be fouled after a physical challenge and Denmark broke through Martin Braithwaite, who flew past a struggling Joe Rodon and sent the ball into the box. Substitute Neco Wlliams made a complete hash of his attempted clearance and the ball fell to Dolberg, who fired home from close range.

Wilson joined the action after an hour only to be dismissed in injury time but even though they tried to press, Denmark still came closest through Mathias Jensen's overhit cross, before Braithwaite hit the post late on from close range. They’d get their deserved third goal through Maehle as he slammed home from six yards out as Wales pushed forward, and a fourth followed when Andreas Cornelius teed up Braithwaite in injury time.

This Welsh side just seemed too inexperienced to get back into the game. Bale, Ramsey and Ben Davies aside, the likes of Neco Williams, Rodon and Chris Mepham have never competed at this level and Denmark were able to assert their dominance over Page’s team.

Wales have done incredibly well to get out of the group, but unlike five years ago, this is where their journey ends. It has not been an underachievement but instead a missed opportunity, but even the most fervent Welshmen will admit they were beaten by the better side.

For a Denmark side oozing with class, this could just lead to something special. Outside of the big nations at the tournament, they have been the most impressive team on display. The first team into the last eight, they now have a winnable draw, bags of experience and a manager who is tactically astute enough to change games, which is a perfect blend when it comes to tournament football.

The nation that the whole of Europe have taken to their hearts, spurred on by the absent Eriksen, are on track to do something quite special this summer.