Imagine some of the stuff we’d have avoided if Fifa had decided to scrap the 2022 World Cup in Qatar. There’d have been no pitiful politicking over LGBTQ+ armbands, no detention of people wearing rainbow-clad clothing entering stadiums.

None of the ticket chaos, traffic madness, backtracking on beer sales, empty seats and over-inflated attendances, nor the inadequate accommodation facilities.

But without this World Cup we also wouldn’t have been able to watch Christian Eriksen make his return to the main international stage 17 months on from the harrowing afternoon on which he very nearly lost his life playing for Denmark against Finland at Euro 2020.

We have obviously borne witness to his recovery at club level with Brentford and latterly Manchester United, while he has also been back on the international scene with the Danes since March. But none of those 39 games before Tuesday were played under this kind of spotlight, on the same multi-nation scale as a European Championship or World Cup.

So to see him line up among his Denmark team-mates for the goalless World Cup Group D clash with Tunisia in Al Rayyan felt particularly poignant. In less than a year-and-a-half he has rallied from a cardiac arrest which threatened his life and left football fans all over the world horrified to once again take the field in a major international tournament. It is a quite remarkable reversal.

From the off, Eriksen seemed to be loving being back out there on this stage. Even when he was clattered by Aissa Laidouni’s tackle in just the second minute the midfielder bounced up with a big smile on his face. TV cameras focused on the Tunisian player pumping his chest, but it was the Dane’s grin that warmed the heart. 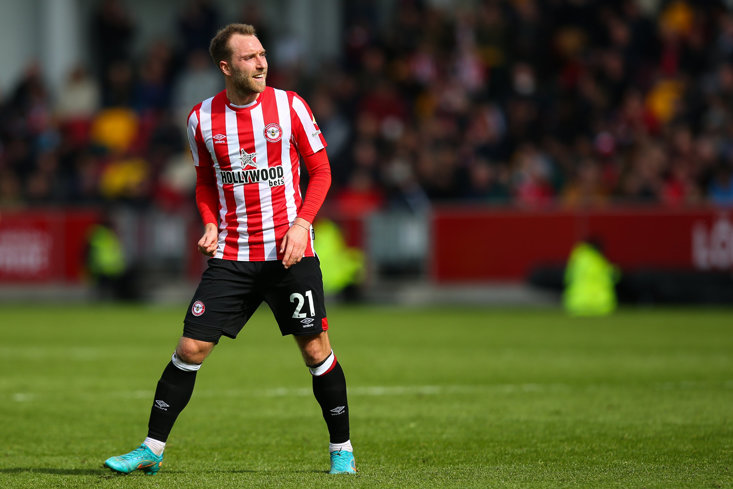 ERIKSEN RETURNED TO THE FIELD WITH BRENTFORD IN FEBRUARY

He wasn’t just there to make up the numbers either. In the first half alone he put in a couple of majestic crosses which deserved to have a team-mate on the end of them, then he produced one of the moments of the game when he picked the ball up in the middle of the field and drove at the Tunisia backline before sending an arrowed shot heading towards the top corner only to see his effort palmed away by Aymen Dahmen. Throughout the match his set-pieces seemed the most likely source of Danish success, so excellent was the delivery.

Both sides had goals disallowed by extremely late flags as the newer interpretations of rules continued to make for increased delays and curtailed celebrations, then Denmark thought they may have a 95th-minute penalty only for the referee to refuse a Var overturn. But while the action itself might not live long in too many people’s memories it will surely never be forgotten by Christian Eriksen.

Just nine months after making it back onto a football pitch, he is now playing for his country in major international competition once more. And what a sight it is to see.

Finally there is a proper feel-good story to come from Qatar 2022.