Denzel Dumfries netted for the second consecutive game as the Netherlands booked their place in the last 16 with a 2-0 win over Austria in Amsterdam. The 25-year-old is thriving in Frank de Boer’s 3-5-2 shape which is allowing him to get further forward, and he proved too hot to handle for an Austrian outfit that now need a result against the Ukraine if they want to progress beyond the group stage.

Dumfries put in another energetic display and wrapped up the three points midway through the second half after Memphis Depay’s early penalty had put the Dutch ahead. It has been some tournament for the PSV man, who has now become only the second Netherlands player to score in his first two European Championship outings, after Ruud van Nistelrooy.

In an organised and considered approach the polar opposite to the borderline care-free tactics adopted in their 3-2 victory over Ukraine, the Netherlands dominated a first half that saw Austria barely lay a glove on them.

After using the opening few minutes to feel each other out, the game exploded into life in the ninth minute when Stefan de Vrij went down after contact from Martin Hinteregger. The decision was perhaps a harsh one, but Depay couldn’t have cared less as he slotted his spot kick into the bottom left corner.

The former Manchester United man is very much the talisman in this Oranje outfit, being directly involved in 48 goals (26 goals, 22 assists) in 66 appearances for his country. In fact, since Frank de Boer’s first game in charge, only Belgium’s Romelu Lukaku (10) has netted more international goals for a European nation than the Lyon striker’s eight.

The 27-year-old could have bagged a hat-trick before the interval with a fierce strike hitting the side netting on 25 minutes before a stunning miss saw him fire over from close range when it looked harder to miss. 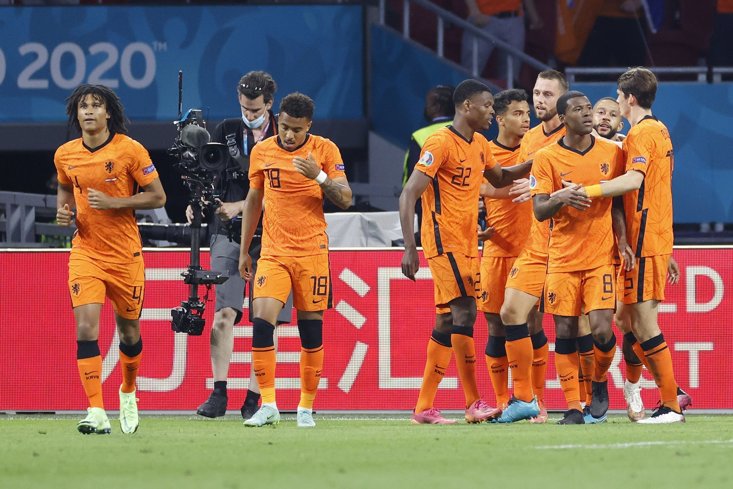 Depay had five of the Netherland’s six chances in the first half, with Georginio Wijnaldum placing his effort minutes before the interval when he would have been better served opting for power.

Barcelona man Frenkie de Jong showed his quality throughout with the infectious Dumfries enjoying success after success down that right flank. De Boer will be delighted with the performances of the PSV Eindhoven star, who adapted superbly from the Netherlands' traditional 4-3-3 formation to this 3-5-2 set-up used at Euro 2020. If this side are going to make an impression in the latter stages, they will need to switch things up from time to time and the versatility of players like Dumfries will be key to that.

Austria struggled to impose themselves on proceedings after the break, with the first real opportunity of the second half falling to the returning Matthijs de Ligt after some head tennis in the area saw his effort trickle wide of the post.

The Dutch dominance saw the game put beyond doubt just minutes later, with Depay involved again as his flick found Donyell Malen, who had been brought on a minute before, who selflessly played in Dumfries to stroke the ball home and book his nation’s place in the last 16.

With the game drawing to a close, David Alaba and Karim Onisiwo both came extremely close to pulling a goal back for Austria, but the Netherlands held firm and can now set their sights on the knockouts. The pace and pressing of the likes of Dumfries, Depay and Wijnaldum, coupled with the Rolls-Royce-ability of De Jong in the middle, means that Oranje will be a match for just about anybody.