The drama of the Championship, hey? Nothing else comes close.

Derby County have dramatically stayed up after a crazy final day of the Championship which saw Sheffield Wednesday, Rotherham and Wycombe relegated. The Rams secured a remarkable 3-3 draw as Martyn Waghorn scored a decisive penalty late on to rescue Wayne Rooney and his side.

Wednesday were ahead twice in the game, leading 3-2 in the latter stages before Waghorn stepped up from twelve yards to secure Championship survival in the most dramatic of circumstances. The focus wasn’t just on the game at Pride Park however, as Rotherham for the majority of the afternoon looked as if they had done enough.

The Millers took the lead early on to heap the pressure on their relegation rivals as Lewis Wing hit a trademark volley into the Cardiff net. In truth the 1-0 half-time scoreline flattered their Welsh hosts as the Millers spurned several big chances to go further in front. Meanwhile at Pride Park, Waghorn went closest for the hosts, missing a header from six yards out, but as his momentum saw him fly into the post, the game was delayed and seven minutes of added time were played in the first half.

After a tense first half, the game exploded into life in that first half added time as Wednesday went in front. Jordan Rhodes got his head to a long throw which forced Kelle Roos into a save, but he couldn’t push the ball away from danger. Instead it fell to centre-back Sam Hutchinson who knocked the ball in, as Craig Forsyth kept him onside. Forsyth can feel hard done by for the initial throw-in decision, as he clearly didn’t touch the ball from Kieran Westwood’s free-kick, but despite protestations, Derby needed to do something they have struggled to do all season. Score.

As it stood at the break, Rotherham were staying up and would finish on 44 points, one point ahead of Sheffield Wednesday, Derby and Wycombe who were all set to finish on 43 points at the break. 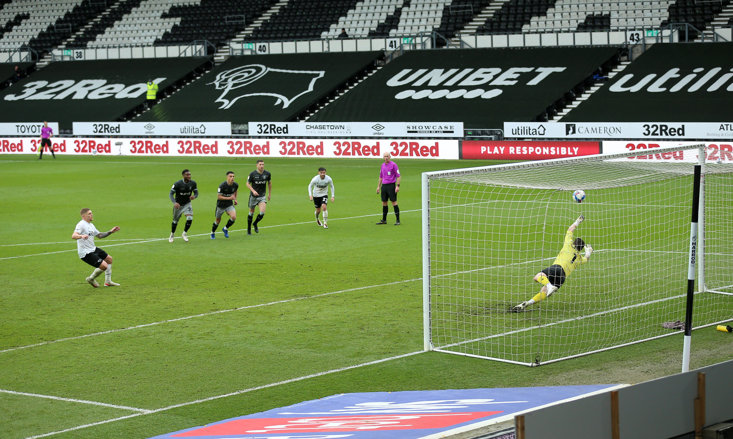 Gareth Ainsworth’s Wycombe side put in another stonking performance to beat Middlesbrough 3-0, but it was their goal difference that saw them relegated. Nevertheless, his side deserve huge credit to reach this points total, when many thought they wouldn’t win a game all season as they lost their first seven on the bounce.

The second half began, five minutes later at Pride Park but it was the visitors who were caught cold as Waghorn headed home the equaliser from a Tom Lawrence cross. With the Millers still ahead, they were now only in the relegation zone on goal difference but one more goal for Wayne Rooney’s side would see them safe.

That goal came just moments later as forgotten man Patrick Roberts latched onto a long ball from a goal kick and curled the ball past an out of position Westwood. In a matter of minutes Derby had gone from down and out to safe, and they were now sitting pretty above that dotted line.

The Championship just isn’t that simple though and the Rams were quickly back under the dotted line when Forsyth presented a golden opportunity to Calum Paterson to level the scores. As Rotherham wasted more chances in Wales, their one goal lead would be enough to keep them up, if the game in the east Midlands finished all square. 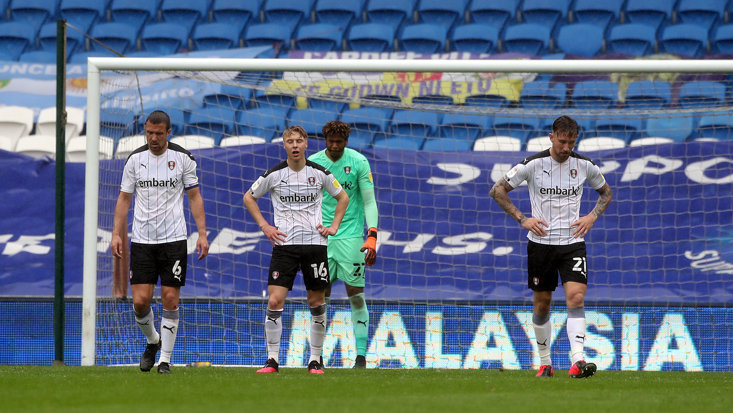 Things swung once again in a chaotic second half as Wednesday went in front. From a corner, the ball was not cleared by the Derby defence and Chey Dunkley headed the ball to Julian Borner on the goal-line who nodded in. Calls for offside once again fell on deaf ears as Rooney was left furious on the touchline. They’d fight back though as Waghorn converted a penalty after Dunkley tripped him in the box and simultaneously, there was a goal in south Wales.

Marlon Pack drove in a low strike to break Rotherham hearts in final moments and relegate Paul Warne’s side for the third time in five seasons from the second tier. That meant, with the injury hit first half, all eyes were on Derby v Sheffield Wednesday. With the scores tied at 3-3, Derby were staying up, but one Wednesday goal would have saved Darren Moore’s men. Despite throwing the kitchen sink at Rooney’s side, the hosts held on for the point that secured their survival and relegated Wednesday to the third tier.

Nothing in football comes close to the drama of the final day of the Championship.