The UFC Apex in Las Vegas, Nevada hosts a huge women’s strawweight clash on Saturday when Mackenzie Dern meets Marina Rodriguez. The main event is likely to have major implications in the world title picture, and current UFC champion ‘Thug’ Rose Namajunas is sure to be watching with interest. The rest of the card features an intriguing welterweight meeting, a clash between two of the most exciting flyweight contenders and the return of a middleweight on a roll.

In a fight with massive implications for the women’s strawweight division, fourth-ranked Dern faces sixth-placed Rodriguez. Both women are riding winning streaks, but something has to give in the Octagon on Saturday.

Submission specialist Dern has three Performance Of The Night gongs in her last four fights, all wins. The Jiu-Jitsu black belt last seen tapping out Nina Nunes in April of this year, and a win against Rodriguez would see her enter the frame for a highly-anticipated clash with the winner of ‘Thug’ Rose’s upcoming bout with Weili Zhang.

Rodriguez has rebounded brilliantly from a split decision loss to Carla Esparza last year, winning two fights since. The Brazilian scooped a Performance Of The Night award for her stunning TKO of Amanda Ribas in Abu Dhabi, before decisioning former Invicta champion Michelle Waterson in May.

A perfectly-poised main event between two upwardly-mobile strawweights, Dern is the pick to continue her march through the division in a close fight.

Brazilian Jiu-Jitsu practitioner Brown will be looking to build on his impressive submission win over Alex Oliveira, when he meets the powerful Gooden.

Gooden scored a stunning knockout over Niklas Stolze last time out, snapping a two-fight losing streak that had seen him drop decisions to Alan Jouban and Abubakar Nurmagomedov. ‘Nite Train’ does not tend to get the nod on the scorecards, with his last decision victory coming in February 2019. He has three KOs and two submission in his five wins since, so look for him to try and take Brown out early. 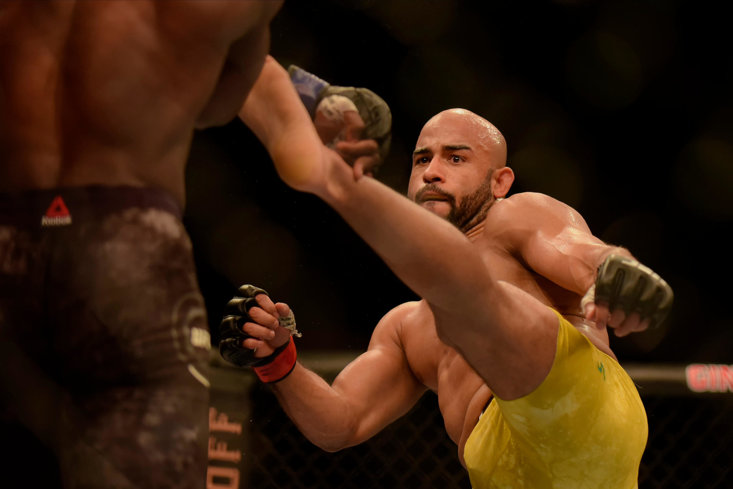 Randy Brown bounced back from a stoppage at the hands and knees of Vicente Luque to tap out Oliveira. The former Ring Of Combat champion is a solid bookies favourite to triumph, having proven equally adept on the mat or standing, having a 6-5 split of knockout to submission wins.

World-ranked Elliott looks to keep ticking over against Nicolau, eyeing a second shot at the UFC Flyweight championship. His first shot arrived in 2016, when he was fresh off winning The Ultimate Fighter: Tournament Of Champions. That night, he stepped into the Octagon with Demetrious Johnson, one of the greatest UFC fighters of all time. There was no shame in that decision loss, but Elliott has been in mixed form since, going 4-4.

Nicolau made a winning start to his UFC return in March, having previously been released from the organisation in 2019. The Brazilian defeated Manel Kape via split decision, taking his combined UFC record to 4-1. Elliott provides a huge task though, and is the pick to win on the night.

Sabina Mazo returns to the flyweight division after losing her bantamweight debut to Alexis Davis. She’ll meet American Top Team athlete Mariya Agapova in a battle of fighters looking to rebuild after a loss.

Dana White’s Contender Series alum Phil Hawes looks to continue his unbeaten UFC start against Deron Winn. This fight was originally scheduled for July, before Winn pulled out due to injury.