On Saturday we will celebrate Diego Maradona’s birthday without him for the first time. It still seems wrong that arguably the greatest footballer ever to lace up a pair of boots is no longer with us.

Diego was amazing. He had the innate ability, the fearlessness to show it on the greatest stages, the balls to take on everyone and everybody, the fallibility of somebody brought up in difficult surroundings but with the willingness to express that within his public persona, even at the expense of his career at times.

While the debate often rages in modern times about Lionel Messi and Cristiano Ronaldo being football’s best of all time, neither will ever know what it was like to play your entire career on paddy-field pitches against opponents who were given the licence to take countless lumps out of you before the referee would even consider taking his yellow card from his pocket.

Maradona had his internal vices to contend with, but also had to deal with every defender wanting to cut right through him at every opportunity, every groundskeeper looking to make the pitch as bobbly as possible to negate his dribbling wizardry and every supporter wanting a piece of him for good and bad.

And yet we still saw how incredible he was, even if he wasn’t on TV every week as happens to Europe’s best players these days. We’d sit and wait for four years at a time to get a glimpse. If World Cups seemed like bigger deals in the 80s and 90s it was because of the exclusivity; we’d be watching players we had only ever read about, or who we faintly remembered from the previous Mundial. But in Maradona we had the one guy we knew would leave his mark in some way, shape or form. 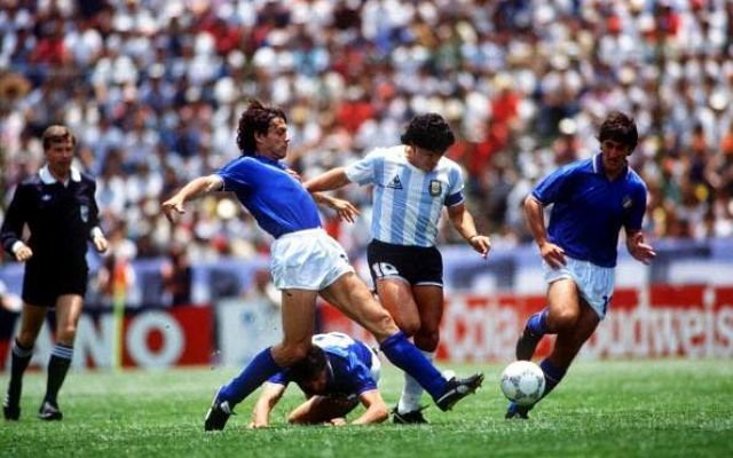 MARADONA WOULD BE ON THE END OF SOME HORRIBLE CHALLENGES

In Spain 1982 he gave an appetiser of what he would go on to become. His virtuoso display against Hungary was the highlight of Argentina’s first group phase performance, with two goals scored in a 4-1 win, but for the most part this was a tournament at which Maradona was targeted like never before. His reputation as the potential star man had preceded him, and the opposition treated him horrendously.

After being kicked about constantly by Italy – and Claudio Gentile in particular – Maradona was given similar treatment by Brazil, with one foul by Junior leaving everyone incredulous, particularly after the referee only awarded a corner. With five minutes to go and Argentina 3-0 down, Diego had had enough. Joao Batista had just clattered Juan Barbas with a high boot and Maradona exacted his own retribution, kicking Batista in the midriff and immediately being shown the red card as a result. He was the world’s greatest player, but referees had not protected him.

Four years later in Mexico we wondered whether the same might happen again but in the quarter-final his tournament came to life. That was when he outjumped goalkeeper Peter Shilton thanks to an extended ‘Hand of God’ before leading the England defence on a merry dance as he scored the greatest goal ever scored. Don’t agree? Just watch it again.

Look at how the ball almost refuses to run along the ground, such is the unevenness of the surface. There are the moments when he could so easily have taken other options but backed his ability to take it on a bit further. There’s the coolness, also, to take the extra touch which sends Shilton to the ground even as Terry Butcher chases him down, knowing that if he can keep the ball on his left side Butcher will clatter him but have no chance of stopping him side-footing home. It is simply majestic. You’d gladly wait four years to see Maradona play if he had the ability to do that.

That wasn’t the end for Diego and Argentina, as the crowning moment would arrive a week later in their 3-2 win over West Germany in the World Cup final. Maradona was rightly at the top of the world.

They’d be back on the same stage against the same opponents in 1990, with Argentina’s circuitous route to the final in Italy coming almost entirely thanks to Maradona again. His influence on the team was arguably even more obvious than in 1986, and in the semi-final he would have to go through the mental anguish of taking on the host nation in his adopted home of Naples with the home crowd cheering on their country rather than their favourite son.

Having disposed of Italy in the last four, he found that the crowd in Rome ahead of the final were not welcoming. The Argentine national anthem was met with whistles, infuriating Diego. His response was to call them ‘sons of bitches’ as the TV camera passed in front of him, and his relationship with Italy never recovered. Argentina lost a dour final 1-0, but they, and Diego, would be back four years later…

…Sort of. In the USA this didn’t look like the same Diego. At 33, he was overweight and demonic-looking. He’d obviously provide high moments (no pun intended), with his goal in a 4-0 win over Greece almost as good as anything he’d previously produced at a World Cup, but after playing a part in the 2-1 win over Nigeria in Group D he was seen heading off the pitch alongside a FIFA drug tester for a random sample. After testing positive for ephedrine, he was sent home from the World Cup and it was the last we would see of him on the greatest stage of all.

Perhaps it was always going to end that way. We waited four years at a time knowing that there was as much chance of scandal and sensation as there was goals and glory for Diego Maradona. In 1986 and 1990 we got the very best of him. In 1982 and 1994 we got glimmers and then regrets.

But that was Diego, and we loved him for his humanness. He was flawed like us, but he had the ability with a football that the rest of the world could only dream of. He was brilliant despite everything. Despite the savage opponents. Despite the refereeing. Despite the pitches. Despite himself.

There will never be another Diego. He was always worth the four-year wait.