Football
News
The Portuguese was signed in the summer to bolster the Reds attack and is thriving
Elliott Bretland
22:04, 15 Mar 2021

When Jurgen Klopp set about bolstering his stunning front three this summer, it was going to take a player of immense quality to fill in for Mohamed Salah, Sadio Mane and Roberto Firmino. The fact Diogo Jota actually adds to the Reds triumvirate tells you of his supreme talent and it was little wonder he got the winning goal in Monday night’s 1-0 victory over former club Wolves.

At Molineux, the Portuguese netted his first goal in his third start since returning from a knee injury he sustained against Midtjylland in the Champions League in December. Jota may have missed two-and-a-half months on the sidelines but has returned full of energy and graft.

While Roberto Firmino, himself missing from action with a knee injury, brings so much to the Liverpool team, working tirelessly to help Salah and Mane find the net, Jota too has brought goals, ingenuity and skill and somehow, added a fresh dimension to one of Europe’s best attacks. Sure, he was signed to improve Liverpool's options upfront but he has excelled to such an extent, he now likely makes fans' starting team as one of those front three ahead of the Brazilian he deputised for on Monday. 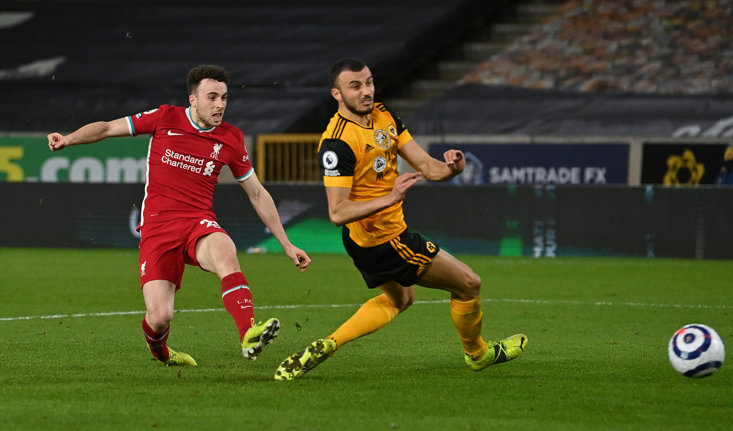 Nine minutes in away at Wolves, Liverpool’s passes looked a little wayward and rushed while Georginio Wijnaldum’s heavy touch gave away possession easily. This is a Reds team bruised and battered by six straight home defeats and defending champions going into this one knowing they trailed leaders Manchester City by 28 points with ten games remaining. One could forgive them for lacking confidence and lacking the flowing football which catapulted them to a first title in 30 years last season.

On the early evidence, Liverpool were going to have to rediscover their clinical edge and Jota provided it in first-half injury time. As so often is the case, Liverpool’s frontline worked together to put the ball into the back of the net. Salah kept the ball with neat close control before feeding Mane who took the ball and played in Jota who lashed home a low left-foot drive. It wasn’t the truest hit but was enough to beat Rui Patricio in the Wolves net.

In the second half, Salah and Mane combined again to give the ball to Jota who was surrounded in the area but worked it to find space and got a shot away. The Wolves stopper got behind it well but this was a reminder of Jota’s shooting prowess. He is always a danger.

Late on, the Wolves goalkeeper had be taken off on a stretcher having suffered a worrying head injury after clashing with team-mate Conor Coady as he attempted to thwart a Liverpool attack. Medics tended to him on the pitch for seven minutes before he was replaced by John Ruddy. Team-mate Raul Jimenez suffered a similarly horrendous head injury at Arsenal in November and was watching on from the stands still sidelined.

It meant the two teams were playing still with 107 minutes on the clock but Liverpool held on despite Wolves piling on the pressure in the dying stages. The win puts the red half of Merseyside back level with blue half Everton and five points behind Thomas Tuchel’s Chelsea who sit in that coveted final Champions League spot.

"Call it ugly, call it dirty, call it whatever you want. It’s three points," Klopp told Sky Sports after the game. "It's all about the result. A big fight. If we want three dirty points, I'm fine with that. We defended well, we counter-attacked. A lot of really good football moments. The goal we scored was beautiful. I thought the goalie would have saved it but it was in."

Remember that Jota has missed a third of the season but this was his tenth goal of the campaign. He is efficient and clinical and that figure is nearly double the six Roberto Firmino has scored. Last season, you would never have thought Liverpool’s attack needed an extra dimension but where would they be without Jota this season? Could things have been worse? And had he been fit, would Liverpool be in the top four right now?

Whatever happens this season, Jota has a long future ahead of him at Anfield. At 24, he has youth on his side. Salah and Mane are 28 while Firmino turns 30 in October. During a season of such disappointment, this purchase from Wolves is a major bright point. Jota is the matchwinner Liverpool didn’t know they lacked or needed.