Football
News
The ex-footballer reunites with managers from throughout his career for this fun, new podcast
Jack Porter
13:00, 22 Oct 2020

A good podcast will be a good friend. Whether you’re on a winter run, doing the weekly shop, or simply pottering around the house and scaling the stairs going up to the bedrooms. And for a friendly podcast, you of course need a friendly voice, and there’s few friendlier than former footballer, turned football pundit, turned Homes Under The Hammer presenter, the inimitable Dion Dublin. We also can’t resist a cracking puntastic pod title, and for his new conversational audio show, Dublin’s double-barrelled ‘Gaffer Tapes’ is a certifiable winner. Former forward Dublin, an alumnus of such sides as Coventry City and Aston Villa, had 22 managers in his 22-year professional footballer career. “I didn’t get on with some, but I wanted to know what goes on in their minds”, he states as he sets out to sit them down for a one-to-one session through individual episodes.

A £1million purchase for Manchester United by Sir Alex Ferguson from Cambridge United, the Red Devil connection would remain for Dublin in the nineties with stints under Ron Atkinson and Gordon Strachan, a former Man Utd manager and a former player, respectively. Strachan he would reunite with again up at Celtic, whilst other coaches who guided Dublin included Villa boss John Gregory and Norwich City head honchos Peter Grant and Glenn Roeder. 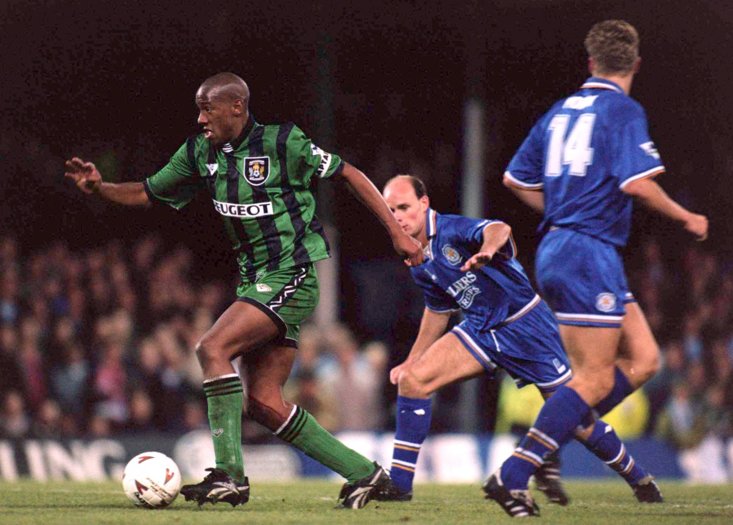 The podcast has kicked off with, in Dublin’s own words, “a footballing legend, a managerial legend, one of the country’s greatest ever players” in ex-Three Lions boss Glenn Hoddle (recently venturing off on his own path into the pod-sphere).

For a man who has become more familiar to a wider audience in 30-minute slots on daytime TV, Dublin doesn’t mess around, delving straight into his interviewee’s career and not letting up, only punctuating with that recognisably jovial guffaw.

Though he is now past 50, there’s something endearing about him referring to his guest as ‘Boss’ as he attempts to uncover the unheard-of frustrations and pressures of management (“Why didn’t you pick me? Dublin doesn’t hesitate to ask at one point). It helps that Hoddle is an extremely listenable speaker, with an enviable playing career that lasted until he was 38 years old, before becoming a presence in the dugout hotseat from an idea that was planted in his head by his Monaco manager, Arsène Wenger, and led to the England job. Naturally this forms the primary focus of his conversation with Dublin.

If it continues in its current form, it is of course sensible to imagine Gaffer Tapes to amount to 22 possible episodes for 22 possible managers. It might not last all too long without necessary expansion, but the enjoyment gained from these trepidatious initial steps taken by Dion Dublin suggests otherwise (and yes, Homes Under The Hammer does get a mention!).