Novak Djokovic admits that his relationship with volatile Wimbledon final opponent Nick Kyrgios has improved beyond all recognition since the Australian publicly stuck up for him as he was having a visa cancelled and being deported from Down Under earlier this year.

Not so very long ago in 2020 after Djokovic organised the now infamous Adria Tour that resulted in several players contracting Covid, Kyrgios said of the unfortunate episode: “Unfortunately when he was supposed to show some leadership and humility he went missing. Majority would say he has taken an L regardless.” And the Aussie was later to brand Djokovic “a tool” over his Covid quarantine demands leading up to the 2021 Australian Open.

But Kyrgios was one of few players publicly to stand up for Djokovic and criticise his own Australian government during the chaos that led to the Serb – who refuses to have the Covid vaccine – having his visa cancelled and being deported in January this year, unable to defend his title in Melbourne.

Kyrgios called it “a s***show,”, adding; “I feel like we’re just trying to fight things that aren’t right, it’s not about the vaccination any more, it’s just about him not being here on the right visa or his visa being cancelled. I just think it’s crazy, I feel so sorry for him. Preparing for an Australian Open or grand slam is enough for someone and the pressures that he has are so unique, he’s going for 21 slams. Now his visa is cancelled. How we deal with this stuff is just embarrassing.”

Kyrgios revealed that this had hugely improved their relationship to the extent that they regularly exchanged messages – even suggesting it had reached the heights of a ‘bromance’. 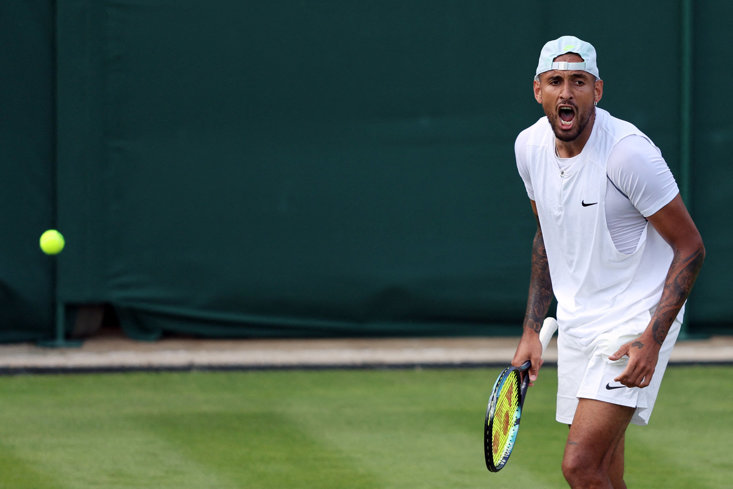 With Kyrgios possessing one of the longest rap sheets in tennis for his on-court behaviour, including two fines to date at this Wimbledon, both have had their spells being mired in controversy.

And  Djokovic said: “I don't know if I can call it a bromance yet! But we definitely have a better relationship than what it was probably prior to January this year. When it was really tough for me in Australia, he was one of the very few players that came out publicly and supported me and stood by me. That's something I truly appreciate. So I respect him for that a lot.

“In a way it's a surprise [Kyrgios reached the final] because of his ranking. He has never reached a grand slam final. So maybe not too many people are giving him big chances to reach the final.

“But between us players, we always know how dangerous he is, on grass particularly, because of his game, because of his attitude on the court being so confident, just going for it, being a very complete player. It seems like mentally he's at a better state than where he was some years ago.

“As time passes by, you're maturing, you're understanding yourself what you need to do in order to get yourself to the best possible, optimal state of mind, body, and soul in order to perform your best. These are the occasions where he loves, where he thrives, in a big stage. So in another way it's also not a surprise for me that he's there. And honestly, as a tennis fan, I'm glad that he's in the finals because he's got so much talent.

“We know what was happening throughout many years with him mentally, emotionally. On and off the court, a lot of different things were distracting him. But for the quality player that he is, this is where he needs to be, and he deserves to be.”

And in one of the most anticipated finals for years, Djokovic - who has lost both tour matches to Kyrgios in straight sets - is in no doubt what a threat Kyrgios poses with his serve and other weapons and especially on the grass.

He added: “His motion for the serve is so fluid and just very quick, He can hit any angle really. He tosses it forward so he can come in, serve and volley. He puts himself in a great position to be aggressive or to stay back. It's tough to read his serve. I haven't practiced with him or played with him since the last time I lost to him.

“On grass I would assume it's even tougher to read his serve and to return because he has so many free points. You could see that throughout this tournament, as well. He just puts additional pressure on your serve. He moves well, has got great hands and is a very complete player.

“I guess it's going to be a game of small margins. I hope I can be at the desired level, then really it's a mental game in the end, who stays tougher and calmer in the decisive moments.”

Kyrgios is 3/1 to defeat Djokovic with Betfred*