Tennis
News
The no1 seed plays Soonwoo Kwon in the first round of Wimbledon on Centre Court on Monday
Hector Nunns
09:05, 26 Jun 2022

Novak Djokovic admits he still has reservations about what he called the ‘fairness’ of Wimbledon banning Russian and Belarusian tennis players from this year’s Championship.

The 35-year-old Serbian, the No1 seed, is bidding for a seventh singles title this year that would see him tied with American Pete Sampras and move to just one shy of Roger Federer’s record of eight – as well as taking him to 21 slam singles titles in all, one short of current record-holder Rafa Nadal.

But the backdrop to this year’s tournament is a controversial one, with the All England Club insisting that government pressure given the terrible war being waged on Ukraine by Russia with support from Belarus left them with no alternative other than to ban players from those countries.

However that position is not unanimous in tennis, with the French Open along with other tour events allowing players to take part, as long as they played under a neutral flag and did not make any pro Vladimir Putin statements.

And the ATP men’s tour in tandem with the WTA responded by taking away this year’s sizeable ranking points for Wimbledon, something that has provoked both strong agreement and consternation.

Ukrainian former player Sergiy Stakhovsky, a four-time tournament winner on the ATP, headed home to join up and fight on the front line earlier this year – and in comments made this week in a German newspaper said all Russian sportspeople should be banned from everything.

Djokovic, who plays Soonwoo Kwon in the first round on Centre Court on Monday, said: “I know Sergiy for a long time, of course. He's been my colleague for a long time on the court but also in the council. We have really good relationship. I reached out to him and we communicated in the last period.

“Look, I understand the frustration coming from him and Ukrainian people towards Russia and what is happening. Of course, I'm not going to comment or get in the midst of the war. But what I can say is that as a child of a war, several wars actually during the '90s, I know what it feels like being in the position.

“But at the other hand, I can't say I fully agree to ban Russian tennis players, Belarusian tennis players, from competing indefinitely. I just don't see how they have contributed to anything that is really happening. I mean, I don't feel it's fair. 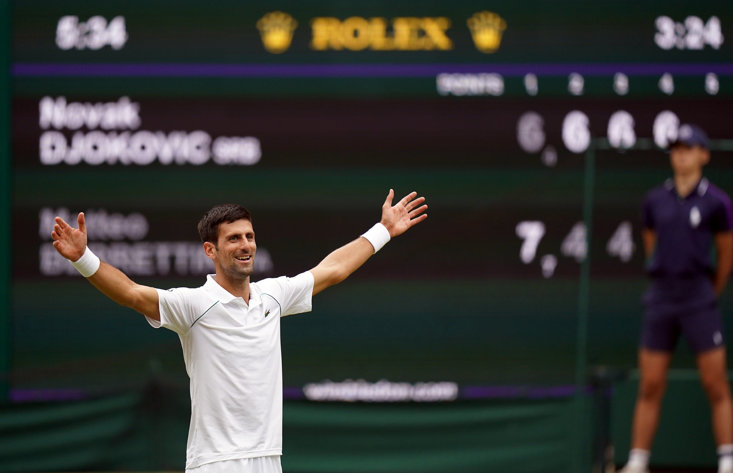 “I think they would accept the compromise that they've actually had as a situation or circumstances with Olympic Games anyway to play under neutral flag. I feel like they deserve to win. They deserve to compete. They are professional athletes. None of them has supported any war or anything like that.

“It's very sensitive. Once something like this happens on a big stage, anything you really say as a person coming from one or the other country, you know, is going to be judged in one way or another.

“It's really hard to say what is right, what is wrong on the players. But in my heart as an athlete, putting myself in a position where someone would ban me from playing because of these circumstances, and I have not contributed to that, I wouldn't think that's fair.

“Back in the '90s, from '92 to '96, any athletes from Serbia were not allowed to compete on international stage in any sport. So I know how it feels. I know many athletes. At that time I was too young, but I know athletes that were competing at that time. I know how it has affected their lives. Many of them have left their sport because four years is a very long time.”

Djokovic, who has chosen not to have the Covid vaccine, had his visa cancelled in Australia in a near-farcical series of legal battles in January preventing him from adding to his tally of nine Australian Open titles. That may see him banned for two further slams Down Under. And given his stance on non-vaccination he looks set to be banned from this year’s US Open. These could have a serious impact on his chances of overhauling Nadal’s 22 singles slam titles – making lifting the trophy at Wimbledon all the more important.

Djokovic, who said he would not be having the vaccine before the New York event, added: “Well, you're right, as of today I'm not allowed to enter the States under these circumstances. Yes, of course, I'm aware of that. That is an extra motivation to do well here.

“Hopefully I can have a very good tournament, as I have done in the last three editions. Then I'll just have to wait and see. I would love to go to States. But as of today, that's not possible.

“There is not much I can do any more. I mean, it's really up to the US government to make a decision whether or not they allow unvaccinated people to go into the country.”