Tennis
News
The other times players took their anger out in all the wrong ways
Elliott Bretland
13:36, 07 Sep 2020

The look of horror hit Novak Djokovic almost as quickly as the tennis ball that rifled into the throat of the line judge, the result of a frustrated wild shot that ended his US Open fourth round match against Spain’s Pablo Carreno Busta.

As the line judge slumped to the ground the top seed was quick to apologise and tend to the shocked woman, but it was too late and the Serbian was disqualified. There were no gasps from the crowd with the court empty due to the current pandemic but you could cut the tension with a knife. We wanted not to look, through sheer embarrassment for the world number one, but at the same time we couldn’t keep our eyes off what had just happened.

Djokovic knew he had messed up in front of the millions tuning in, no doubt the collective wince across the globe and fallout to come at the forefront of his mind. He took to Instagram to apologise and said, "This whole situation has left me really sad and empty. I checked on the linesperson and the tournament told me that thank God she is feeling ok. I‘m extremely sorry to have caused her such stress. So unintended. So wrong.”

However, he isn’t the first tennis star to make such a mistimed mishap and he won’t be the last. Here are some other times players took their anger out in all the wrong ways, often at the expense of another’s safety. 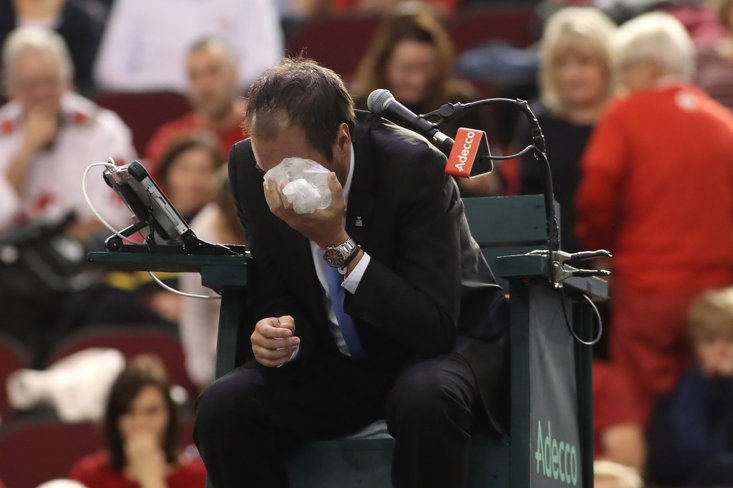 Denis Shapovalov smashed a ball with ferocious power at umpire Arnaud Gabas during his David Cup tie against Kyle Edmund in 2017. It was unintentional but the damage was severe. Gabas held his face in pain, sat still in one position with the shock of it all, as Canada’s Shapovalov looked on shell-shocked at what he had done.

It was an excruciating watch, Shapovalov urgently waiting in a panic for any sort of reaction from the umpire and clearly wanting the ground to swallow him up as time seemed to stop dead. Gabas eventually demanded ice, in the end the injury was so bad he required surgery for a fractured bone under his left eye

Shapovalov, just 17 at the time, was fined £5,600 by the International Tennis Federation but the story does have a nice ending, with Gabas not harbouring any ill feelings.

"He messages me here and there and I message him," Shapovalov told BBC Sport. "He is an extremely nice guy. He has really helped me get through it because he could have been mean about it - but he is a great gentleman, a great guy."

The Russian-born Australian had had enough and smacked the ball at fans she perceived to be cheering too loudly in favour of her opponent, Angelique Kerber, at the Cincinnati Open thirteen years ago.

She became only the second player on the WTA Tour to be disqualified, when she fired the ball in the direction of Kerber’s passionate followers. Luckily, the ball hit the wall and cannoned back but startled spectators. Having earlier complained to the umpire about the off-putting noise, Rodionova had no idea what she had done wrong after the clash was defaulted for unsportsmanlike conduct.

Kicked To The Curb 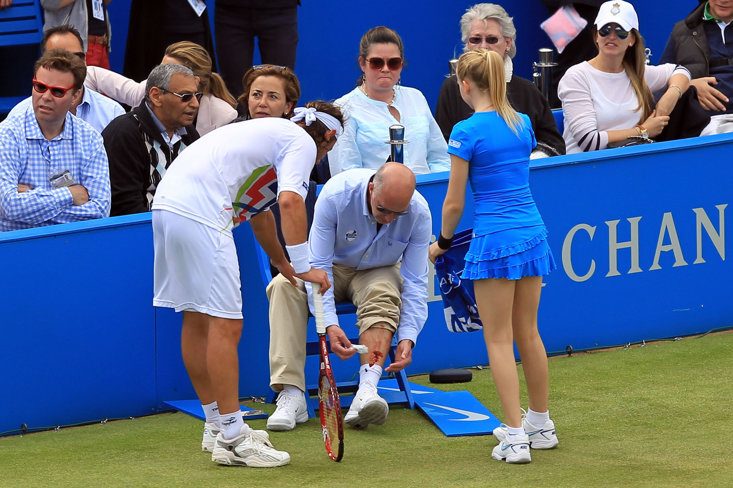 The Aftermath Of An Advertising Board To The Shin (Getty Images)

Argentina’s David Nalbandian had a Queen’s final to forget in 2012, after he injured a line judge by kicking an advertising board into his shin.

Drawing blood, Andrew McDougall shot up in pain, looking completely bemused and perplexed at Nalbandian’s actions, who had thumped the panel placed just centimetres in front of the line judge’s seat. Nalbandian looked equally confused at what occurred before fans chanted to ‘play on’. However, it was game over and Marin Cilic was awarded the win.

"I am very sorry, sometimes you get frustrated on court," he admitted to Sue Barker. “Today I've made a mistake. Sometimes I agree and I do but everyone makes mistakes. I don't feel it had to end like that - especially in a final.”

Such a nice, unassuming guy working as a pundit, Henman’s reputation was that he was whiter than his white tennis shirts but back in 1995, he let his emotions spill over, striking a ball girl on the head.

“There’s hard and there’s very hard, that was hard; It wasn’t as if I bulleted it in her face,” he insisted, explaining himself to the officials who now had a decision to make. The girl was visibly shaken and upset but so were the crowd who groaned in despair when the umpire ultimately decided to default, with boos growing louder and louder as he came down from his seat. Who is the real baddy here, people?

Henman and his doubles partner, Jeremy Bates, became the first players to be disqualified from Wimbledon in the professional era.

x
Suggested Searches:
Tyson Fury
Manchester United
Marcus Rashford
Lewis Hamilton
F1
Air Jordan
More
tennis
Novak Djokovic Is Destined To Become Tennis' Greatest Ever Male...
In an era in which Roger Federer has taken the level of competition to new heights and Rafael Nadal [ ... ]
tennis
Naomi Osaka Wins Second Australian Open With Clincal Display...
Naomi Osaka has won her second Australian Open title and remains unbeaten in major finals after beating [ ... ]
tennis
Osaka And Djokovic Both Looking For History In Australian Open...
So the Australian Open final line-ups have been decided. Daniil Medvedev’s outstanding straight-sets [ ... ]
tennis
Did A Tearful Serena Williams Bid Her Final Farewell To The...
Serena Williams waved as the adulation of the Australian Open crowd came from all four corners of the [ ... ]
tennis
Serena, Djokovic And A Rank Outsider Take Top Billing In The...
We knew this Australian Open would be different, but even so, a semi-final line-up without Rafael Nadal [ ... ]
tennis
Aslan Karatsev Is The 2000/1 Shot Taking The Australian Open...
You probably hadn’t heard of the name Aslan Karatsev two weeks ago, yet now the Russian will face [ ... ]
tennis
Cautious Novak Djokovic Battling For Record Grand Slam After...
Novak Djokovic showed his battling qualities once more on Sunday and remains on course for a ninth Australian [ ... ]
tennis
Nick Kyrgios Grabs The Headlines Again On His Way To The Last...
Love him or hate him, Nick Krygios is box office stuff. So rarely out of the headlines, the Australian [ ... ]
tennis
Is A Fond Wimbledon Farewell The Best Andy Murray Can Hope For...
Along with Roger Federer, Sir Andy Murray is one of the major absentees from perhaps the strangest Australian [ ... ]
tennis
Australian Open Chaos Should Serve As A Warning For Euro 2020...
The build-up to the Australian Open has simply been like nothing we have ever seen or experienced before. [ ... ]
tennis
Netflix Doc 'Settling The Score' Shines Light On One Of Sport's...
Sporting injustices have tarnished the game throughout history, but the injustices that go under the [ ... ]
tennis
Long Live The King Of Clay! Nadal's Fifteen Year Love Affair...
A million seconds is eleven and a half days, yet a billion seconds is 31 years and seven months.  [ ... ]
tennis
Arthur Ashe, The History-Making Trailblazer Who Transcended...
Arthur Ashe is the only black man to win the singles title at each of Wimbledon, the US Open, and the [ ... ]
tennis
40 Years On From Borg, McEnroe And The Greatest Wimbledon Match...
In a match that is widely regarded as arguably the greatest-ever to be played at Wimbledon, Bjorn Borg [ ... ]
tennis
The Tennis Podcast Is All You Need To Get Through The Wimbledon...
Having planned, once again, to broadcast everyday through this year’s Grand Slam tournaments, [ ... ]
tennis
Andy Murray Can Still Compete But Has Nothing Left To Prove,...
Andy Murray knows a thing or two about creating history. The man who became Great Britain’s [ ... ]
tennis
Andy Murray Looking At Miami Open Return After Extended Injury...
Andy Murray is targeting a return to the court at the Miami Open later this month ending his extended [ ... ]
tennis
Maria Sharapova Deserves Respect For Taking Female Earnings...
Maria Sharapova has called time on her glistening career having won every single Grand Slam event and [ ... ]
tennis
Why The Next Month Is Vital For Andy Murray And His Wimbledon...
Sir Andy Murray’s hopes of competing at Wimbledon this year and defending his Olympic title in [ ... ]
tennis
An Open Victory Would Be Huge For Ash Barty, But Even Bigger...
Ashleigh Barty has reached the semi-finals of the Australian Open for the first time in her career following [ ... ]
tennis
Performance Over Outcome: Why Federer Is Still A Beast On The...
The superlative-defying Swiss is at it again. Roger Federer has muscled his way into the Australian [ ... ]
tennis
Mr Shakira And The Multi-Billion Pound Revamp Of The Davis Cup
Premier international tennis tournament the Davis Cup, fast approaching the 120th anniversary of its [ ... ]
tennis
The Young German Ready To Shatter Djok, Federer & Nadal's Ironclad...
Rafael Nadal’s hopes of finishing the season as world number one took a serious blow with a straight-sets [ ... ]
tennis
Here's Why Murray, Djokovic And Tennis's Stars Have Been Confusing...
Andy Murray, Novak Djokovic and the rest of the tennis world have been confusing reporters and fans [ ... ]
tennis
Serena Williams And The Numbers That Have Taken Her To The Verge...
With a straight sets victory over Elina Svitolina, Serena Williams once again stoked fans’ hopes [ ... ]
tennis
Daniil Medvedev: The Moscow Menace Infuriating At The US Open
“Every search for a hero must begin with something every hero needs: a villain.” That quote [ ... ]
tennis
Coco Gauff, Naomi Osaka And Taylor Townsend: Next Generation...
Taylor Towsend stole the headlines at the US Open as the 23-year-old rank outsider knocked out fourth [ ... ]
tennis
Serena Williams v Maria Sharapova: The Rivalry That Tennis Has...
Yesterday’s build-up to the US Open was full of the cliched lines we have heard on repeat for [ ... ]
tennis
Deaf Tennis Player Lee Duck-hee Etches His Name Into The History...
Tennis star Lee Duck-hee cemented his name in the history books at the Winston-Salem Open by becoming [ ... ]
tennis
Novak Djokovic On Course To Ransack Grand Slam Record
Tennis fans around the world are privileged in the current era to witness the most beautiful race for [ ... ]